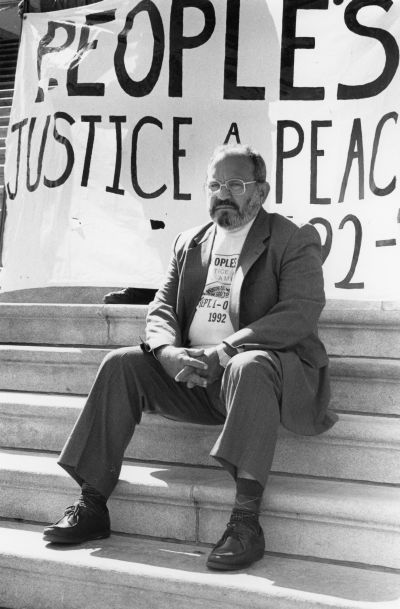 Pope Francis has lifted the suspension of Maryknoll Father Miguel D’Escoto Brockmann, who 29 years ago was ordered to stop exercising his priestly ministry because he refused to give up his political position in Nicaragua’s Sandinista government. Father D’Escoto is pictured in a 1992 photo in Washington. (CNS photo/Barb Fraze)

VATICAN CITY (CNS) — Pope Francis has lifted the suspension of Maryknoll Father Miguel D’Escoto Brockmann, who was ordered 29 years ago to stop exercising his priestly ministry because he refused to give up his political position in Nicaragua’s Sandinista government.

The pope made his decision after Father D’Escoto, 81, formally requested permission to resume priestly duties, Passionist Father Ciro Benedettini, assistant director of the Vatican press office, said Aug. 4. Vatican Radio reported that Father D’Escoto had written that he wanted to be able to celebrate Mass again “before dying.”

The letter announcing the lifting of the suspension was signed by Cardinal Fernando Filoni, prefect of the Congregation for the Evangelization of Peoples.

According to a press release from the Maryknoll Fathers and Brothers, the letter announcing the decision said: “The Holy Father has given his benevolent assent that Father Miguel D’Escoto Brockmann be absolved from the canonical censure inflicted upon him, and entrusts him to the superior general of the institute (Maryknoll) for the purpose of accompanying him in the process of reintegration into the ministerial priesthood.”

Although barred from exercising priestly ministry, Father D’Escoto remained a member of the U.S.-based Maryknoll Society. He continues to live in Nicaragua.

Father D’Escoto supported the socialist Sandinista National Liberation Front in its effort to overthrow the government of Anastasio Somoza. When the Sandinistas came to power in 1979, he was named foreign minister, a position he held until 1990, when the Sandinistas lost political power in Nicaragua.

The Code of Canon Law prohibits priests from holding partisan political offices. After repeated attempts by the Vatican and their religious orders to convince them to resign their positions in the Sandinista government, Father D’Escoto and two brothers — Jesuit Father Fernando Cardenal, the Sandinista education minister, and Trappist Father Ernesto Cardenal, the culture minister — were suspended by the Vatican in 1985.

Father Fernando Cardenal was readmitted to the Jesuits in 1997, four years after renouncing his membership in the Sandinistas. His brother, a poet, continues to be involved in politics.

NEXT: Compassion, sharing, Eucharist: Steps on the path to heaven, pope says