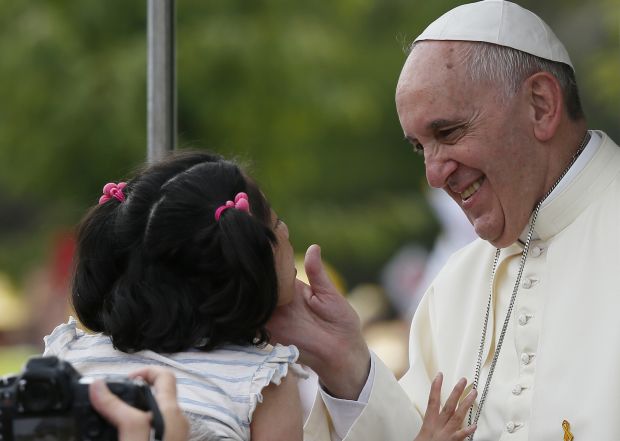 Pope Francis greets a girl as he arrives to at a rehabilitation center for people with disabilities in Kkottongnae, South Korea, Aug. 16. (CNS photo/Paul Haring)

KKOTTONGNAE, South Korea (CNS) — Pope Francis visited a set of Korean Catholic institutions exemplifying some of his highest priorities for the church, including engagement of laypeople and dedication to the needy.

The pope’s Aug. 16 visit to the hilltop complex of the Kkottongnae community, about 60 miles south of Seoul, included time with disabled children and adults, speeches to members of religious orders and lay activists, and a moment of silent prayer at a symbolic cemetery for aborted children. It took place on the third day of his five-day visit to South Korea.

“To assist the poor is good and necessary, but it is not enough,” the pope told about 150 leaders of various Catholic lay organizations. “Multiply your efforts in the area of human promotion, so that every man and every woman can know the joy which comes from the dignity of earning their daily bread and supporting their family.”

Such dignity, the pope warned in an off-the-cuff addition to his prepared text, was currently under threat from a prevalent “culture of money.”

Pope Francis paid tribute to the Korean church’s unique tradition of lay leadership. All but one of the 124 martyrs he beatified earlier that day in Seoul were lay Catholics.

But the pope alluded to the possibility of tension with clergy, asking his audience to “work in complete harmony of mind and heart with your pastors, striving to place your own insights, talents and charisms at the service of church’s growth in unity and missionary outreach.”

The Kkottongnae community was founded in the 1970s by Father John Oh Woong Jin, a member of the Catholic Charismatic Renewal, and now operates in 10 countries outside Korea. The complex Pope Francis visited includes a retreat center, a spirituality training institute, a university specializing in social work and rehabilitation centers for disabled children and adults. 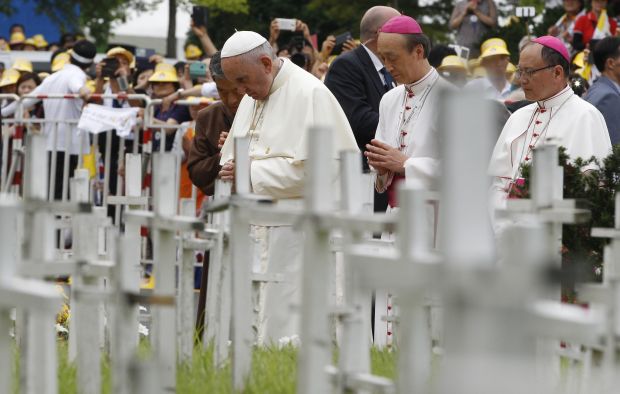 The pope’s first event at the complex was a meeting with about 70 disabled adults and children, some of them in wheelchairs or hospital beds. Before going inside, he removed his shoes as a sign of respect, according to custom at the center. He stopped and greeted the patients one by one, embracing them or placing his hands on their heads for a blessing, and watched a brief dance performance by the children.

A small boy in a wheelchair greeted the pope with a bouquet of flowers, which the pope placed at the foot of a statue of Mary. For the rest of his visit to the rehabilitation center, he wore a necklace of flowers he had been given.

Pope Francis spent the better part of an hour with the disabled, longer than planned, then visited the Garden of Aborted Children, where crosses mark the symbolic graves of the unborn. The pope prayed there with Brother Lee Gu-won, a missionary who was born without arms or legs and was abandoned at birth.

To get back on schedule, the pope canceled a celebration of vespers with members of religious orders, at which he had been scheduled to read an opening greeting and a closing benediction in Korean.

“There is no time,” the pope told the religious, almost all of them women, as he pointed to his watch with a smile.

But in a speech to the religious, the pope urged them to reaffirm their vows of chastity, poverty and obedience.

“Mature and generous obedience requires that you cling in prayer to Christ who, taking the form of a servant, learned obedience through what he suffered,” he said. “There are no shortcuts: God desires our hearts completely.”

“Chastity expresses your single-minded dedication to the love of God,” the pope said. “We all know what a personal and demanding commitment this entails. Temptations in this area call for humble trust in God, vigilance and perseverance.”

The pope’s strongest words concerned threats to the vow of poverty, as he warned against “all things which can distract you and cause bewilderment and scandal to others.”

“The hypocrisy of those consecrated men and women who profess vows of poverty, yet live like the rich, wounds the souls of the faithful and harms the church,” the pope said. “Think, too, of how dangerous a temptation it is to adopt a purely functional, worldly mentality which leads to placing our hope in human means alone and destroys the witness of poverty which our Lord Jesus Christ lived and taught us.”

PREVIOUS: Pope calls on Catholics to dialogue with China, other Asian societies