With focus on Gaza, Islamists can kill at will in Iraq, Anglican cleric says 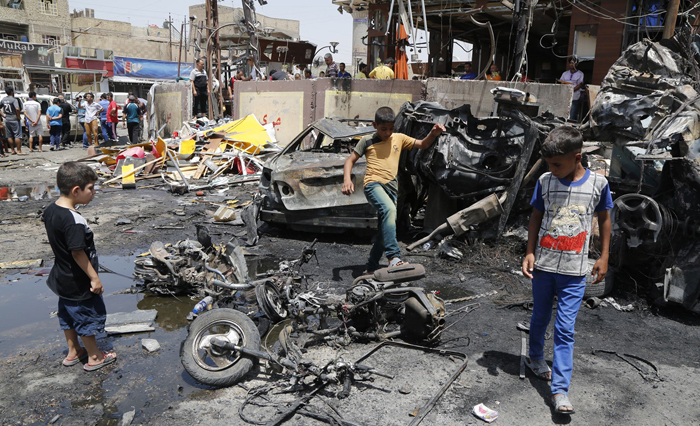 Boys look at the site of a car bomb attack in Baghdad, Iraq, Aug. 1. One Anglican official said more than 1,500 people were killed in Iraq in late July in violence perpetrated by the Islamic State extremists. (CNS photo/Wissm al-Okili, Reuters) 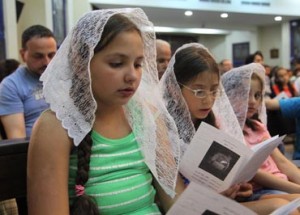 Girls pray for peace in Iraq and Gaza during a Mass at Our Lady of Nazareth Church in Amman, Jordan, July 30. (CNS photo/Jamal Nasrallah, EPA)

AMMAN, Jordan (CNS) — With the world’s attention focused on Gaza’s increasingly desperate situation, some in Iraq feel that brutal Islamist militants can do whatever they want and literally get away with murder.

Serving in some of the worst violence in Iraq over the past decade, the Rev. Andrew White, an Anglican canon at St. George’s Church in Baghdad, said more than 1,500 people killed in late July in the violence in Iraq perpetrated by Islamic State extremists.

“The Islamic State simply said we can do anything now the world is just looking at Gaza,” Rev. White wrote of the precarious conditions faced by Iraq’s historic Christian community. In a newsletter dated July 30 and made available to Catholic News Service, he said the radical group now controls huge swaths of eastern Syria and northern and central Iraq.

“In reality that is true. Iraq seems like old news, yet things just get worse and worse here,” said Rev. White, who also directs the British-based charity, Foundation for Relief and Reconciliation in the Middle East.

“It is as if hell has broken out here and nobody cares, that is, apart from you, our supporters, who never leave us and keep supporting us in every way,” he said.

“The situation is so serious and it is very easy to feel forgotten,” he said.

Iraq was thrown back into crisis in mid-June after thousands of armed members of the Islamic State moved from Syria through much of northern Iraq, killing both Muslims and Christians.

On June 29, the Islamist militants proclaimed a “caliphate,” an Islamic state led by a religious leader, across the territories they had captured, including the city of Mosul, the ancient Christian heartland in Iraq.

In late July, the Islamic State released a new video depicting the group carrying out mass executions and warning Iraqi soldiers and others who dare to resist that they will be rounded up and killed.

Rev. White and his congregation, in addition to numerous Catholic institutions, continue to provide support to tens of thousands of Christians forced to flee the northern Iraqi cities of Mosul and Ninevah. The Islamic State extremists told the Christians they had three options: Convert, pay an Islamic tax or leave.

“Even here in Baghdad, people are terrified of what is happening around us,” Rev. White said, adding that many parishioners have left or are planning to leave Iraq’s beleaguered capital.

“The Islamic State has established their hidden cells within Baghdad, and people are seriously under threat even though they are not in the areas controlled by the Islamic State,” he added. “The number of kidnappings here has soared, and people simply do not know what is going to happen next.”

Archbishop Maroun Lahham, patriarchal vicar for Jordan in the Latin Patriarchate of Jerusalem, pleaded for prayers for Iraq, Gaza, Syria and Libya during a special Mass in the Jordanian capital, Amman, July 30.

“The oppressors do not last. We ask God to remove the fear from the hearts of the oppressors so as to become a party that believes in peace and is capable of making peace,” Archbishop Lahham said in his homily, asking prayers for peoples’ survival. The Catholic leader underscored that violence only begets more violence and said the vicious cycle in the Middle East must be broken.

“What is happening nowadays in Gaza in particular, and what is happening every day in Iraq, Syria and Libya happened in the past and now is being repeated — every time this situation is absolutely repeated without any change,” he said.

“After reaching a cease-fire, after the genocides, and after the demolition of houses the status quo will be restored, namely hostility, siege, injustice and fear in the heart of the potential murderers; the fear with the belief that in the death of others is a means to maintain security, or merely a deceptive way of reassuring people,” he warned. “They are terrified, that is why they kill.”

The archbishop said God’s help is needed to change hearts into those who seek and are committed to making peace in these very troubled lands.

“But we believe in the good, almighty and just God. We pray for the survival of Gaza, Iraq, Syria and Libya,” he told the congregants gathered from Jordan’s many churches at Our Lady of Nazareth Church in Amman.

“Our prayer for the peoples of Gaza, Iraq, Syria and Libya should continue until distress, death, and siege are eliminated, so they move in the direction of peace,” he said.