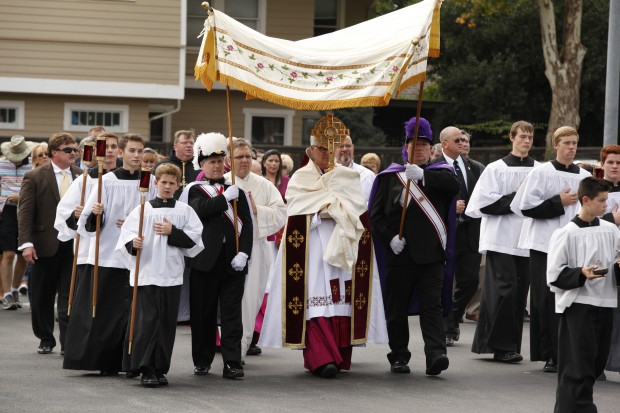 More than 600 people filled St. Francis of Assisi Church for the prayer service led by Archbishop Paul S. Coakley. Another 1,400 people stood in overflow areas and outdoor prayer gardens to listen to his homily over loud speakers.

The Holy Hour was celebrated as a response to a Satanic “black mass” held the same day in a downtown arena.

The more than 2,000 Catholics at St. Francis of Assisi also participated in a eucharistic procession through the streets of Oklahoma City, led by Archbishop Coakley carrying a monstrance with the Blessed Sacrament.

“The Holy Hour and procession at St. Francis of Assisi Parish was a very public and positive witness to the beauty, truth and goodness of our Catholic faith in the face of an unexpected challenge. No doubt great fruit and many graces will come forth as result of this ordeal,” he added.

In early August, Archbishop Coakley asked Catholics to offer prayer and penance to prevent the Satanic group Dakhma of Angra Mainyu from holding the “black Mass,” which took place in a conference room at the Civic Center Music Hall.

Despite a petition and repeated requests that city officials keep the Satanic ritual from going forward, because it would be an affront to Oklahoma’s more than 250,000 Catholics, officials said the event was protected by the First Amendment and would not be canceled.

The crowd at St. Francis of Assisi included laypeople, priests, deacons and men and women religious from the archdiocese and from around the country. 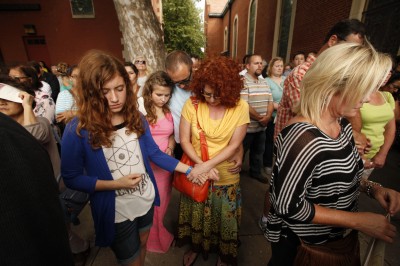 “Your presence is a powerful witness of faith in the midst of what has been a particularly challenging time for our community,” Archbishop Coakley told the congregation in his homily. “We gather today in the presence of our eucharistic Lord, who is the source of our unity, imperfect though it might be, and our bond of charity.”

He emphasized that those assembled were not there to protest.

“Let us put aside, for the moment, our outrage. We are here to praise and to adore,” the archbishop said. “We are here to give thanks for the gift of our faith and the priceless treasure of the Lord’s abiding presence with us in the sacrament of his body and blood.

“We are gathered before our eucharistic Lord to listen to his holy word and open ourselves to the promptings of his Spirit so that we might become more faithful and authentic witnesses of his love and mercy in the midst of our broken and suffering human family.”

He added: “We are also here to offer our petitions to the Lord, that he might deliver us from the power of sin and, yes, from all demonic influences.”

Archbishop Coakley told the congregation that the Catholic faith “is not meant to be — and cannot remain — contained within the walls of this beautiful church.”

The eucharistic procession that would follow the Holy Hour, he said, was “a reminder that we, the church, are present in the world as light, as salt and as leaven to bring hope and the offer of Christ’s salvation to all we meet.”

“Let us pray that we might embrace our mandate to live as missionary disciples in the midst of the world so that we might draw all people to Jesus Christ and to safe harbor in his church,” he said.

Outside the civic center, hundreds held a mostly peaceful protest.

Video footage posted on the website of Oklahoma’s Channel 9 TV station showed the group’s leader, Adam Daniels, wearing a black robe trimmed in red, similar to a bishop’s cassock. He told reporters that the point of mocking items used by the Catholic Church was to destroy fear he said people have of the church.

In late August, a stolen consecrated host was at the center of a lawsuit filed by Archbishop Coakley against Daniels’ group. The host was intended for use at the “black mass.” But the archbishop dropped the suit after the host was returned.

Contributing to this story was Diane M. Clay, editor of the Sooner Catholic, newspaper of the Archdiocese of Oklahoma City.