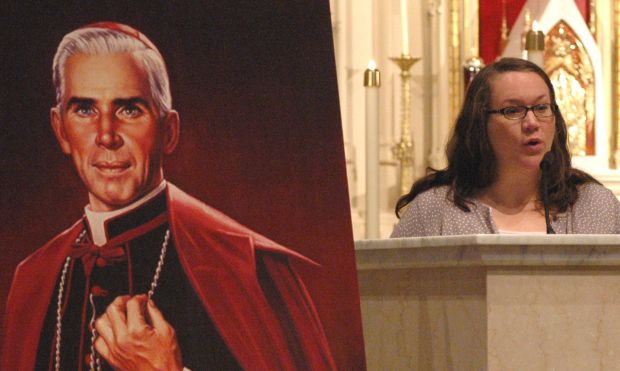 With evidence of her son's alleged miraculous healing boxed and sealed in front of a portrait of Archbishop Fulton J. Sheen, Bonnie Engstrom gives a reading at a 2011 Mass at St. Mary's Cathedral in Peoria, Ill. (CNS photo/Tom Dermody, The Catholic Post)

WASHINGTON (CNS) — The canonization cause of Archbishop Fulton Sheen has been suspended indefinitely, according to a statement issued Sept. 3 by the Diocese of Peoria, Illinois, where the archbishop was born.

The suspension was announced “with immense sadness,” the diocese said. “The process to verify a possible miracle attributed to Sheen had been going extremely well, and only awaited a vote of the cardinals and the approval of the Holy Father. There was every indication that a possible date for beatification in Peoria would have been scheduled for as early as the coming year.”

Archbishop Sheen, who gained fame in the 1950s with a prime-time television series called “Life Is Worth Living,” died in New York in 1979.

The diocesan statement said the Archdiocese of New York denied a request from Bishop Daniel R. Jenky of Peoria, president of the Archbishop Sheen Foundation, to move the archbishop’s body to Peoria.

Deacon Greg Kendra, in a Sept. 3 posting on his blog The Deacon’s Bench, said the reason for the request was for “official inspection and to take first-class relics from the remains.”

A Sept. 4 statement from Joseph Zwilling, communications director for the New York Archdiocese, said Cardinal Timothy M. Dolan of New York “did express a hesitance in exhuming the body” absent a directive from the Vatican Congregation for Saints’ Causes and family approval. The statement added that Archbishop Sheen’s “closest surviving family members” asked that the archbishop’s wishes be respected and that he had “expressly stated his desire that his remains be buried in New York.”

Zwilling said Cardinal Dolan “does object to the dismemberment of the archbishop’s body,” but, were it to be exhumed, relics that might have been buried with Archbishop Sheen might be “reverently collected” and “shared generously” with the Peoria Diocese.

A subsequent statement Sept. 5 from the Peoria Diocese said it had received a “shocking statement” June 27 from an attorney for the New York Archdiocese saying the archdiocese “would never allow the examination of the body, the securing of relics or the transfer of the body.”

The new statement said Bishop Jenky had been assured in 2002 by Cardinal Dolan’s predecessor, now-retired Cardinal Edward M. Egan, that New York had “no interest” in pursuing Archbishop Sheen’s sainthood cause. A 2005 request to transfer the body to Peoria received a response from the Vatican congregation that it was not yet an appropriate time. “With this inquiry complete and a miracle being attributed to Sheen, now is an appropriate time,” the Sept. 5 Peoria statement said.

It added, “Clearly Archbishop Sheen’s wishes for his final resting place could not have anticipated that he would go through a canonization process led by his native Diocese of Peoria, after it was turned down by the Archdiocese of New York.”

Peoria diocesan chancellor Patricia Gibson said in the statement, “After New York clearly turned down the cause, Peoria was happy to put forth the lengthy work and effort because of how much he is loved by the priests and lay faithful in this diocese.”

In an interview posted Sept. 6 by Crux, the Boston Globe’s Catholic news website, Cardinal Dolan said, “We’ve had some issues (with Peoria) over what to do with the remains of Archbishop Sheen and what relics we might be able to share, and I’m committed to doing whatever we can that’s consistent with Sheen’s own wishes, the wishes of his family, the instructions we get from the Congregation for the Causes of Saints and New York state law.”

If the Peoria Diocese’s decision is final to suspend Archbishop Sheen’s cause and to assign it to the Vatican congregation’s historical archives, Zwilling said, “the Archdiocese of New York would welcome the opportunity to assume responsibility for the cause in an attempt to move it forward.”

Cardinal Dolan told Crux, “I guess my next step is to write a formal letter to Bishop Jenky and the congregation, saying we’d be honored to take over the cause if that’s what seems best.”

“After further discussion with Rome, it was decided that the Sheen Cause would now have to be relegated to the congregation’s historic archive,” the Sept. 3 Peoria diocesan statement said.

Bonnie Engstrom, whose delivery of a stillborn baby in 2010 provided the basis for a possible miracle attributable to Archbishop Sheen, expressed sadness and confusion over the delay in the sainthood cause.

“We are very disappointed that the cause to canonize Venerable Fulton Sheen had to be closed, especially because it had been progressing so well,” she told the Catholic Herald, a British Catholic newspaper. “We are incredibly saddened and confused by the Archdiocese of New York’s decision to not cooperate with the Sheen Foundation on the cause. We trust in the goodness of God.”

Engstrom’s son James had no recorded heartbeat for 61 minutes after delivery. Then, as doctors were about to pronounce the child dead, James’ heart started beating. He has defied doctors’ predictions that he would not survive, or that he would have severe physical and developmental limitations. In March, a seven-member team of medical experts convoked by the Vatican reported there is no natural explanation for the boy’s survival.

“Countless supporters especially from the local church in Central Illinois have given their time, treasure and talent for this good work with the clear understanding that the body of Venerable Sheen would return to the diocese,” the Sept. 3 Peoria statement said. “Bishop Jenky was personally assured on several occasions by the Archdiocese of New York that the transfer of the body would take place at the appropriate time. New York’s change of mind took place as the work on behalf of the cause had reached a significant stage.”

Archbishop Sheen, after his years in the TV limelight, retained a high profile by running the Society for the Propagation of the Faith out of New York City.