Cardinal: Pope is ‘friend, brother’; working with him ‘really beautiful’ 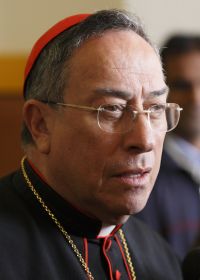 One of nine members of the Council of Cardinals advising the pope, the cardinal reflected on the reorganization of the Roman Curia, his advisory role to the pope, and Catholic response to climate change.

The cardinal made the comment in a Sept. 23 interview with Catholic News Service in New York, where he was participating in interreligious meetings in his capacity as president of Caritas Internationalis.

Reformation of the Roman Curia, the church’s central administrative offices, is a normal response to changing times, has a significant 20th-century precedent, and was a focus of the pre-conclave meetings before Pope Francis was elected, Cardinal Rodriguez said. “Many people do not look back at history and they think now it’s a revolution. No! This is a normal process … that takes place in order to answer to the new signs of the times,” he said.

The current process may feel different because Pope Francis exercises his ministry with a new style, he said.

Cardinal Rodriguez dated the first modern reform of the curia to St. Pius X at the beginning of the 20th century, the second to Pope Paul VI after the Second Vatican Council, and the third to St. John Paul II, with his 1988 apostolic constitution, “Pastor Bonus.”

He cautioned that change will not come overnight, nor will it be dragged out indefinitely. “Many people are thinking that tomorrow the reform will take place. The last reformation, of Pope John Paul, took eight years!”

“Of course, we’re not intending to spend eight years. Consultations of that time were not so easy, because they didn’t have the Internet. Now we communicate and make surveys of the whole church by new media and that is very good,” Cardinal Rodriguez said.

In the cardinals’ meetings before the papal conclave, he said, “there was a big desire for changing, for transforming, for responding to the new signs of the times.”

The establishment of a Secretariat for the Economy was one of the first changes recommended by the pope’s Council of Cardinals. Cardinal Rodriguez said the new secretariat has had an immediate and positive effect. It is reorganizing the Institute for the Works of Religion, commonly called the Vatican bank, which was the first step in a necessary reformation.

“In the past, there was no budget. Can you imagine a state without a budget? Now it’s working and working very well,” he said.

Cardinal Rodriguez said the Council of Cardinals has also focused on advising religious congregations that want to sell their hospitals. He said hospitals are expensive to operate and congregations that face a drop in vocations to staff such facilities may “decide to sell the properties without proper consultation.”

He said a new commission to restructure Vatican communications met for the first time Sept. 22. The cardinal said its purpose is to regroup various communications arms of the Holy See to adapt to new times. They include the Pontifical Council for Social Communications, Vatican Radio, Vatican TV, L’Osservatore Romano and the printing office.

Cardinal Rodriguez said the Council of Cardinals will suggest new dicasteries, or departments, to the pope. Pope Francis will present them to the cardinals of the curia who have responsibility for those areas and will “start a big consultation about the proposals,” he said. One new department is dedicated to laypeople and the family and may entail regrouping existing secretariats, he said.

Working with Pope Francis is “really beautiful, because you know he’s all the time with us as a friend and as a brother,” Cardinal Rodriguez said. “It’s beautiful to share with him and, of course, he’s a simple person and he’s not complicated and this is a blessing.”

The cardinal’s New York visit coincided with the U.N. Climate Summit. He said Catholics must fight global indifference about the issue and take a leadership role to protect creation.

Climate change is real and not ideological, he said. “The impact of the changing climate is unmistakable, scientifically proven beyond a doubt and affects us all.”

“We can see how we are suffering the consequences of this kind of nonsense of abusing the climate and abusing the creation,” he said.

His country’s drought and crop failure this year are related to “the misuse of natural resources” in Honduras, where “clandestine commerce in wood” and “open sky mining” for nonrenewable gold destroy nature and cause contamination.

The industrial and digital revolutions lifted many people in the world out of poverty and eradicated some diseases, he said, but the economic growth has been unequal and comes at the cost of a decisive impact on the natural world.

“We have to do something as a community of faith,” Cardinal Rodriguez said, calling Catholics to act, not just make speeches.

“Catholics who participate in the government should take this seriously and act accordingly to their faith,” he said.

“It’s not a national problem, but a world problem,” Cardinal Rodriguez said. It is a “sin of omission” to stay silent or try to hide the reality of climate change.

“The Holy Father has appealed to the world not to globalize indifference. This is one of the ways of globalizing indifference.” Pope Francis is preparing an encyclical on creation and ecology from the perspective of faith, he said.

He said global “entrepreneurs” should make sure their revenues do not come at the cost of environmental injustice, pollution and carbon dioxide generation. Cardinal Rodriguez said when people say it is too expensive to implement the Kyoto Protocol agreement to reduce greenhouse gas emissions, it means they don’t care for the rest of the world “and this is a big mistake,” he said.

His second four-year term as president of Caritas Internationalis ends in 2015. He said the group’s work “everywhere in the world is a sign of the love of God and of divine providence.”

NEXT: Business leaders explore ways to carry Catholic values to the office