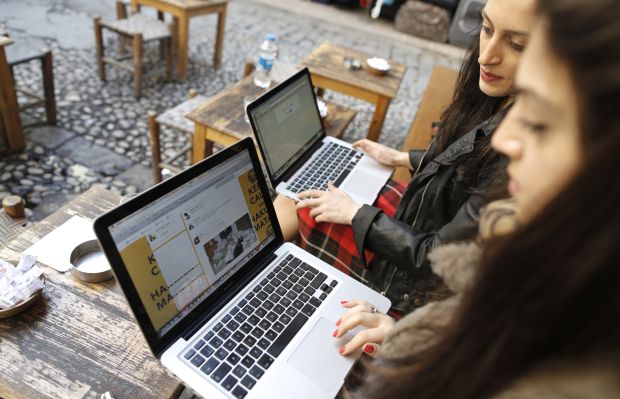 Turkish women try to connect to Twitter at a cafe in Istanbul, Turkey, March 21. In the United States, the Federal Communications Commission is trying to decide whether to formulate a new policy for governing access to the Internet. (CNS photo/Tolga Bozoglu, EPA)

WASHINGTON (CNS) — When it comes to recorded music, the progression went from wax cylinders to shellac discs to vinyl records — with a short-lived detour to the 8-track tape — to the cassette, to the compact disc and in this century to mp3 players, iPods and other digital devices.

The delivery system for visual entertainment also has become similarly compact. What was once the sole province of a stage has been distilled into film, then television, and now the computer — if you’d rather not use your smartphone.

To get all this entertainment digitally requires bandwidth. How much is there for everybody, and should some get a place in line ahead of others because they’re willing to pay more?

That’s the question confronting the Federal Communications Commission as it decides whether to formulate a new policy for governing the Internet.

The question has been answered by close to 1.5 million Americans who weighed in with the FCC Sept. 10, before the agency closed its open comment period Sept. 15. The overwhelming majority of them urged the commission to maintain an open Internet.

Among those weighing in on the issue of net neutrality — the concept that all traffic on the Internet be treated equally — were Bishop John C. Wester of Salt Lake City, chairman of the U.S. bishops’ Committee on Communication and a coalition of 14 interfaith groups, including three Catholic organizations.

The sentiment of a vast majority of those responding is to keep the Internet fair and open to all, with no two-tiered pricing structures, no “fast lanes” for content delivery, and no paid prioritization for either content providers like Netflix — or content users like the rest of us.

The Sept. 10 date is important, because many open-Internet advocacy groups staged a purposeful slowdown of the Internet, trying to replicate what they fear will happen if fast lanes and slow lanes become part of the digital infrastructure.

The Sunlight Foundation, an open-Internet advocate, analyzed about 800,000 of the comments filed with the FCC and determined that 60 percent were form letters written by organized campaigns, and that about two-thirds want the FCC to treat broadband like a utility.

And therein lies the rub. Republicans in Congress and Internet service providers — two of which, Comcast and AT&T, have acquisition mergers pending before the FCC — don’t want that kind of regulation, warning that it would harm innovation and spark a wave of lawsuits.

But some congressional Democrats and net-neutrality advocates say anything less than utility-style regulation would harm innovation because the big players in Internet traffic stay huge, without much chance for competition to change the game.

How about that figure of close to 1.5 million? To show you the depth of intensity of this movement, that’s even more than the number who complained to the FCC about the infamous Janet Jackson “wardrobe malfunction” during the Super Bowl halftime show more than 10 years ago.

It’s an indicator that feelings over net neutrality are not only deep but broad.

Netflix, Reddit and other content providers — their content accounts for a significant percentage of all bandwidth used on the Web — are in favor of an open Internet, even if it’s because doing so protects their own business interests.

A joint letter was filed with the FCC by several journalism-related groups, including the Newspaper Association of America, the American Society of News Editors, the Reporters Committee for Freedom of the Press, and the Association of Alternative Newsmedia, also arguing for an open Internet, “where publishers can continue to distribute important content serving the public interest without restrictions imposed on the ability of the public to receive that content.”

One group, Video Creators for Net Neutrality, was created in the wake of the FCC’s decision to revisit Internet standards. Thanks to online signups, the organization claims 14,000 members whose videos are responsible for an estimated 14 billion visits, or “hits.” One of the 14,000, Hank Green, creator of both Vlogbrothers and Crash Course on YouTube, said in a statement, “The open Internet is the most fertile ground for art, industry, connection and creation that the world has ever known. Anything that threatens that genuinely terrifies me.”

During a Sept. 16 FCC forum, it appeared there could be a break in the impasse on the issue. Instead of the Internet service providers dictating the terms of fast and slow, what if their customers set preferences themselves? Their preferences could involve video streaming, games, music, text or whatever.

Such a compromise might be seen as not violating the principles of net neutrality. It also could keep one side or the other in this debate from howling if it doesn’t get what it wants, and keep the issue out of the courts, where any FCC decision could get tangled up for a good long time — like the hourglass and wheel icons that indicate that the site you want is still loading … and still loading.

NEXT: Cardinal: Pope is ‘friend, brother’; working with him ‘really beautiful’