Catholics stay up all night in Pittsburgh 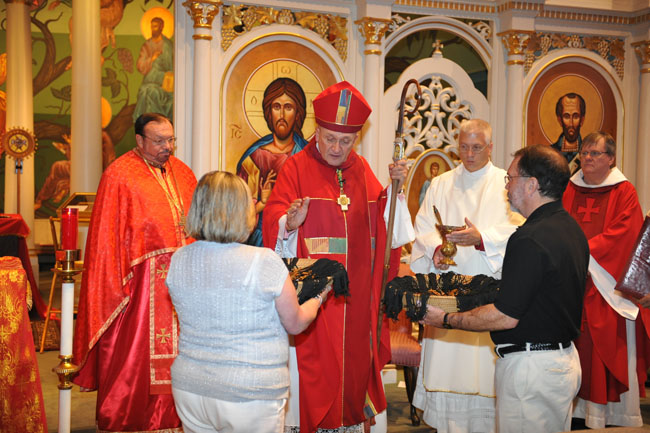 Bishop David A. Zubik of Pittsburgh blesses necklaces with small wooden crosses that were distributed to the congregation at a Latin-rite Mass Sept. 13 at St. John Chrysostom Byzantine Catholic Church in Pittsburgh. The liturgy began an all-night vigil called "Crossing the Universe: The Faces of Catholicism" that gave Catholics a look at the many facets of Catholicism. (CNS photo/Chuck Austin, Pittsburgh Catholic)

PITTSBURGH (CNS) — An all-night vigil Sept. 13-14 at a Byzantine Catholic church in Pittsburgh provided an opportunity for people of faith to participate in the prayers of the various Catholic churches that are “essential facets” of the culturally, ethnically and religiously diverse city of Pittsburgh.

St. John Chrysostom Byzantine Catholic Church hosted “Crossing the Universe: The Faces of Catholicism,” which commemorated the feast of the Exaltation of the Holy Cross.

“Crossing the Universe” was a first for the Pittsburgh region and offered an opportunity for children and families, students and adults of all ages to learn about the collective family of the Catholic Church.

Celebrants included Archbishop William C. Skurla of the Byzantine Catholic Archeparchy of Pittsburgh and Bishop David A. Zubik of Latin-rite Diocese of Pittsburgh.

There are 22 Eastern Catholic churches, which have their origins in Eastern Europe, Asia or Africa, and they trace their roots to five ritual families or groups, including Byzantine. Each Eastern church is in union with Rome and enjoys the same dignity, rights and obligations as the Latin tradition in the Roman Catholic Church.

“As the apostles went forth to announce the Gospel, they did so within the cultures, languages and traditions of the people whom they evangelized. Therefore, the church looked very different throughout the world,” said Father Thomas Schaefer, pastor of St. John Chrysostom Byzantine Catholic Church.

“As time progressed, the expressions of faith and worship continued to evolve. Today the universal Catholic Church is comprised of 23 churches — once referred to as ‘rites’ — which convey the beauty and diversity of our centuries of faith,” he said.

The vigil began at 4 p.m., Sept. 13, with a Latin-rite Mass celebrated by Bishop Zubik and it end at noon Sept. 14 with the celebration of the Byzantine Church’s Divine Liturgy by Archbishop Skurla.

At various times during the vigil, congregants could recite the rosary, participate in adoration of the Blessed Sacrament and attend the celebration of various other Eastern Catholic liturgies including Syro-Malabar, Ukrainian, Syrian, Melkite and Maronite. Also featured were choral groups and the meditative songs of the Taize ecumenical community.

NEXT: Retired Sisters of Charity of New York to receive care at Jewish home