Courts uphold one same-sex marriage ban but void two others 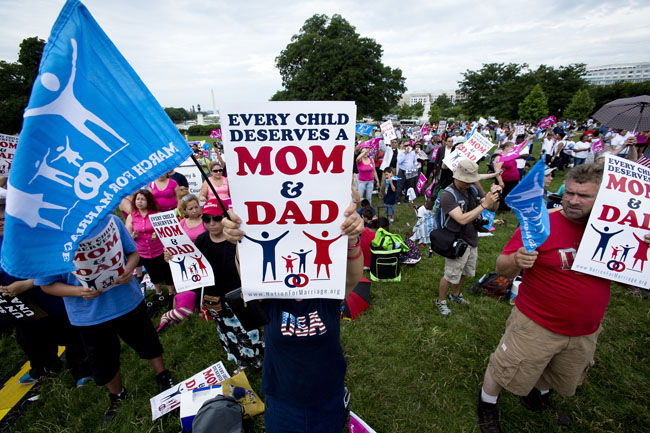 A woman holds a sign for traditional marriage on the West Lawn of the Capitol in Washington June 19. In early September, a court in Chicago ruled that bans of same-sex marriage in Wisconsin and Indiana were unconstitutional while a Louisiana judge upheld that state's ban of the practice. (CNS photo/Tyler Orsburn)

WASHINGTON (CNS) — A federal judge upheld an amendment to Louisiana’s state constitution in early September that defined marriage as the union of one man and one woman, but later that same week, a federal court struck down same-sex marriage bans in Wisconsin and Indiana.

In the Louisiana case, U.S. District Judge Martin Feldman said Sept. 3 the state did not overstep its authority in adopting a constitutional amendment approved in 2004 by 78 percent of the voters that banned same-sex marriage.

It was the first such decision by a federal court since the U.S. Supreme Court struck down part of the federal Defense of Marriage Act last year.

“The defendants (the state) maintain that marriage is a legitimate concern of state law and policy, that it may be rightly regulated because of what for centuries has been understood to be its role,” Feldman wrote in his 32-page decision.

The plaintiffs were six same-sex couples who had wed in other states and wanted Louisiana to recognize their marriages. A seventh couple living in Louisiana sought the right to marry in the state.

Archbishop Salvatore J. Cordileone of San Francisco, chairman of the U.S. bishops’ Subcommittee for the Promotion and Defense of Marriage, lauded the decision in a Sept. 3 statement.

“The federal court rightly declared that Louisiana’s marriage laws ‘serve a central state interest of linking children to an intact family formed by their biological parents,'” Archbishop Cordileone said. “The federal court affirmed that the voters of Louisiana who overwhelmingly chose to define marriage as the union of one man and one woman in their state constitution made a rational decision by embracing the definition of marriage ‘that has endured in history for thousands of years, and prevails in a majority of states today.'”

He added, “Those who are arguing to redefine marriage based upon the desires and interests of adults were presented by this court with obvious questions raised by the logical consequences of their arguments to which they were unable to give an answer, including: ‘Must marriage be limited to only two people?’ Indeed, all who work to promote and defend marriage should be encouraged by this federal court decision.”

But on Sept. 4, a three-judge federal appeals courts in Chicago overturned same-sex marriage bans in both Indiana and Wisconsin, calling the bans unconstitutional.

States cannot justify gay marriage bans on the grounds of the tradition of marriage being for one man and one woman, the U.S. 7th Circuit court of Appeals said.

“Tradition per se therefore cannot be a lawful ground for discrimination — regardless of the age of the tradition,” the court said, citing the “historical realities” of “bad traditions” as cannibalism, foot-binding and suttee — the practice of a widow immolating herself on her husband’s funeral pyre — as well as traditions that are neither good nor bad, such as Halloween trick-or-treating.

After separate courts in Wisconsin and Indiana overturned the same-sex marriage bans in their respective states in June, the cases were combined before the federal panel.

Noting that the ruling “follows the trend of similar decisions across the nation,” the Wisconsin Catholic Conference said in a Sept. 5 statement, “These opinions focus on opposition and animus, rather than the state’s recognition of the nature of marriage. We now await a determination by the U.S. Supreme Court on whether a state and its citizenry retain the power and right to define civil marriage.”

The statement added, “No court can change our Catholic teaching on marriage and no one is suggesting that the ruling will have that effect. … Whatever the Supreme Court decides, the challenge for Catholics going forward is the same as it has always been, to witness our belief in marriage and what it signifies in a way that invites others to share in our belief.”