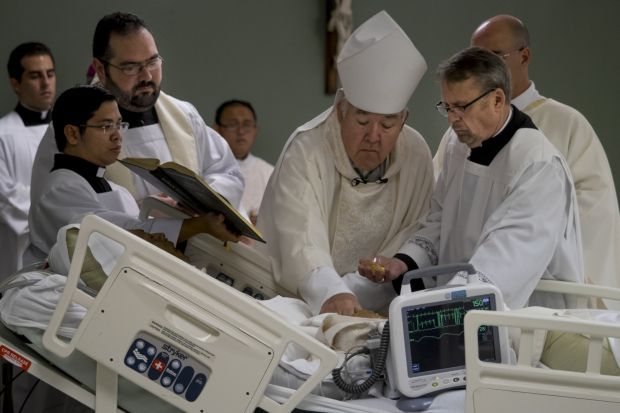 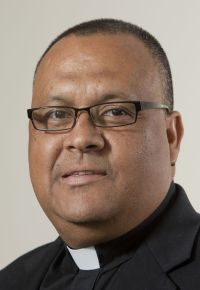 Father William Carmona, a newly ordained priest of the Diocese of Nashville, Tenn., is pictured in a 2012 photo.

SAN ANTONIO (CNS) — As William Carmona lay gravely ill in a San Antonio hospital bed, he repeatedly questioned his classmates from nearby Assumption Seminary: “Where is Bishop Choby?” “When will he get here?” And finally: “How many more hours until he ordains me?”

Carmona, a fourth-year theology seminarian who was entering his final year of preparation for ordination as a transitional deacon this fall and as a priest of the Diocese of Nashville, Tennessee, next summer, was dying of cancer.

When Bishop David R. Choby of Nashville learned of his grave condition after Carmona was rushed to the Christus Santa Rosa Medical Center the first week of September, he made plans to travel to San Antonio to ordain the seminarian immediately because of the emergency circumstances.

“The joy and satisfaction in administering the sacrament of holy orders is a high point in the life of any bishop, but to have the opportunity to celebrate the sacrament for one who is so much looking forward to ordination but faces the certainty of death made it the more poignant,” Bishop Choby said.

He left for San Antonio the evening of Sept. 7 and ordained the seminarian Sept. 8. On Sept. 9, Father Carmona was moved to hospice care. With a priest, deacon and two seminarians at his side, the newly ordained priest died mid-afternoon Sept. 10.

An evening vigil service was planned for Sept. 12 at Assumption Seminary in San Antonio, with a morning funeral Mass to be celebrated there Sept. 13. The priest’s remains will be transferred to his native Colombia, where burial was to be arranged by Father Carmona’s family.

“The priesthood, by its very nature, is multifaceted because it is God’s gift to respond to the needs of the human person,” Bishop Choby said in San Antonio for the ordination.

At the ordination Mass, he was joined by several Nashville priests and deacons, Archbishop Gustavo Garcia-Siller of San Antonio and Father Jeff Pehl, rector of Assumption Seminary, and priests on the seminary faculty, who concelebrated the Mass.

“I know of no other vocation which touches so many moments in a person’s life,” the bishop said. “In a way that is singularly focused, the priesthood has as its center, the mystery of redemption, which is the dying and the rising of the Lord.”

Bishop Choby added that ordination of Father Carmona as he faced death “reflects the Pascal Mystery. That is how our own lives are transformed in the death and resurrection of Jesus.”

Father Carmona was the senior member of a group of eight seminarians from the Diocese of Nashville in formation at Assumption Seminary. The group began an around-the-clock vigil to keep him company while he was being cared for in the hospital’s intensive care unit.

They were all on hand when Bishop Choby ordained him first as a transitional deacon and then as a priest in a room prepared for the occasion by the staff at Christus Santa Rosa. Nurses and physicians were on hand to monitor the ordinand’s condition throughout. Father Carmona lay silently in a hospital bed as Bishop Choby anointed his hands with holy oil and laid his hands on his head. 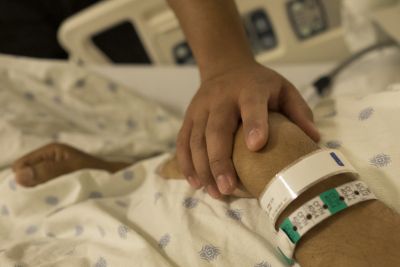 Although Father Carmona was unable to respond verbally during his ordination, he had expressed his assent to the ordination earlier, Bishop Choby told those gathered to witness the sacrament.

Priests near Father Carmona during the Mass saw signs of recognition and joy as the ordination proceeded.

About 200 people, including most of the students at Assumption Seminary, the senior administration of the medical center, members of the Sisters of Charity of the Incarnate Word who sponsor the medical center, and an honor guard of fourth-degree Knights of Columbus, gathered in a large meeting room on the first floor of the hospital.

The full Mass, with a choir of seminarians, lasted about an hour-and-a-half.

“William was one of the students with a very large pastoral heart,” said Dominican Sister Linda Gibler, associate academic dean at the Oblate School of Theology, which is part of Assumption Seminary.

“He was always concerned about what his studies had to do with ministry, how he would be effective, and what affect all of his studies would have to do with his ministry,” she told the Tennessee Register, Nashville’s diocesan newspaper. “He was less concerned with academic details than he was with his pastoral heart. He would have been an excellent pastor.”

“He took to his studies,” said Father Pehl, “but what I’m most proud of is that William was such a good example in the community. He is an older fellow, but his example of arriving early for morning prayer, before everyone else to open the chapel, to spend time in there in the morning and in the afternoon.”

Father Carmona, 51, grew up in Antioquia, Colombia, one of 13 children in his family, and first dreamed of being a priest at age 12. Before coming to the United States in 2000, he had earned a philosophy degree from a seminary in Colombia. He worked in a clothing and grocery store to earn money to continue his seminary education.

He also studied business administration at the University of the South in Antioquia and worked in security for the Colombian government. 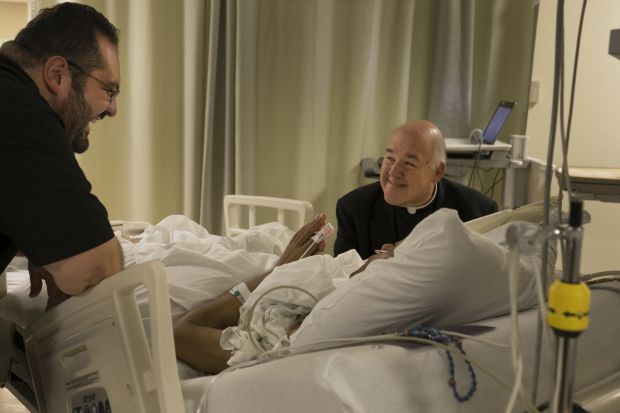 Once in the United States, he wanted to enter the seminary for a diocese in California but his English language skills were not strong enough. He became a scholastic for the Society of the Divine Savior — known as the Salvatorians — and moved to the Salvatorian provincial house in Milwaukee.

Several years later, he went to Cookeville, Tennessee, to serve as youth minister at St. Thomas Aquinas Parish, which is staffed by Salvatorians.

In 2008, the Nashville Diocese accepted him as a seminarian and he entered Assumption Seminary. During summers, he returned to Nashville to serve at various parishes around the diocese, including St. Philip in Franklin.

“He had such a warm heart and we had a wonderful summer with him in our community,” said Deacon Rafael Bougrat of St. Philip.

The deacon, a native of Venezuela, befriended Father Carmona this past summer. “I never met somebody who is so spiritual. He was so into God that he just was able to expose it to everybody, and everybody perceived it like that.”

He was in San Antonio for Father Carmona’s ordination.

“I never expected I would be helping the bishop with the Mass,” Deacon Bougrat said. “They gave me the honor to put the deacon’s stole and dalmatic on top of his fragile body. … When I put on his stole, I saw his eyes open a little bit. I got the feeling that, to me, he knew where he was.”

“I was able to be there and tell him how much I love him and how much he changed my prayer life,” the deacon added. “He was always in the church praying. He was always looking for the good of the church, especially the Hispanic community.”

Editor’s Note: To view a video of Father Carmona’s ordination, visit the Diocese of Nashville website at www.dioceseofnashville.com. In lieu of flowers for his funeral, donations were requested for the Assumption Seminary Endowment Fund for Seminarians; the seminary website is www.assumptionseminary.org.

Musacchio is editor in chief of the Tennessee Register, newspaper of the Nashville Diocese. Contributing to this story was the Register’s managing editor, Andy Telli, in Nashville.

PREVIOUS: ISIS conflict is all about money, not religion, cardinal says

NEXT: Church leaders, politicians, laity meet in D.C. on behalf of Christians