ISIS conflict is all about money, not religion, cardinal says 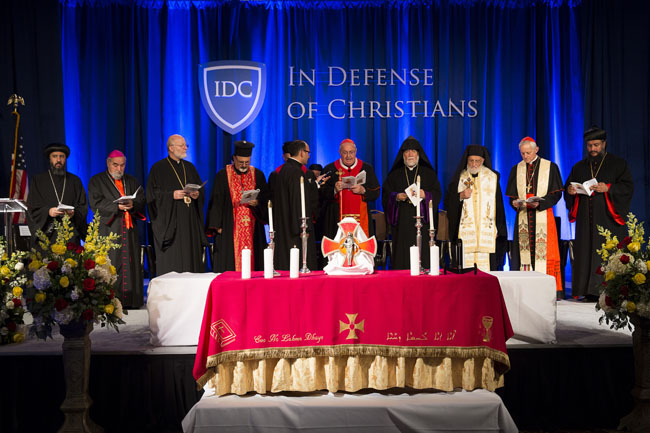 Cardinal Leonardo Sandri, prefect of the Congregation for Eastern Churches, leads a prayer during an ecumenical prayer service at the Omni Shoreham Hotel in Washington Sept. 9. Christian patriarchs from the Middle East, along with lawmakers and international human rights activists, are attending In Defense of Christians three-day summit about the persecution of Middle Eastern minorities. (CNS photo/Tyler Orsburn)

WASHINGTON (CNS) — The conflict in which Islamic State fighters are driving out Christians and other minorities must not be seen as a war between Islam and Christianity, said the head of the Vatican Congregation for Eastern Churches.

“I do not share this position and I ask, on the contrary, that it never prevail,” Cardinal Leonardo Sandri told participants in the inaugural In Defense of Christians summit Sept. 9.

He said the Islamists are not looking to destroy a foreign Christian culture, but are intent on destroying centuries of “a respectful and useful cultural coexistence.”

He also said it was “impossible … to quell the doubts about how the vast economic interests at stake affect the conflict.”

The cardinal reminded approximately 500 people at the Omni Shoreham Hotel about Pope Francis’ statement Sept. 8, 2013, the day after his prayer vigil for peace in Syria. Pope Francis said: “And the doubt always remains: Is this war or that war — because wars are everywhere — really a war to solve problems, or is it a commercial war for selling weapons in illegal trade? These are the enemies to fight, united and consistent, following no other interests than those of peace and of the common good.”

Cardinal Sandri said that people also must consider “the control of oil wells and of gas deposits, the safety of the petroleum and gas pipelines, the supremacy of one area of free commercial trade over another, and this is not only in the Middle East but also in Eastern Europe and in other regions of the world.”

He said this leads to a situation in which someone’s personal economic interests are more important that human life, which “can even be annihilated, or at least not taken into account.”

Cardinal Sandri said the situation in which Christians and other minorities were being forced from their homes and executed had to be resolved through the United Nations — and it might or might not involve the use of force.

“The unjust assailant must be halted, but let us not limit our thinking to the use of force — in some cases necessary — alone, and in any case only within the framework of an international agreement under the aegis of the United Nations, involving the Arab and Muslim countries,” he said.

The cardinal thanked Muslim leaders — such as the grand muftis of Saudi Arabia and of Al-Azhar University in Egypt, as well as of several imams of England and Italy — who had spoken against Islamic State atrocities in recent weeks.

“Let us thank them in the hope that their example may be followed by many so that no silence may be equivocal, and let us thank together all those in Iraq, in Jordan, in Lebanon, in Bahrain … who have worked hard or have offered help and shown willingness to welcome the Christians expelled from the plain of Ninevah,” he said.

He said he had heard of private residents of Jordan who had gone to the Caritas offices with basic goods or offered to pay rent for refugee families. He said Muslim students had volunteered with Caritas in Jordan.

Earlier in the day, speaking to the Administrative Committee of the U.S. Conference of Catholic Bishops, Cardinal Sandri thanked them for their consistent calls for Americans to remember their “elder brethren in the faith.” He also thanked them for their special prayers for peace in Iraq; letters to politicians, including President Barack Obama, meant to raise awareness; and special collections for those affected by Middle Eastern violence.