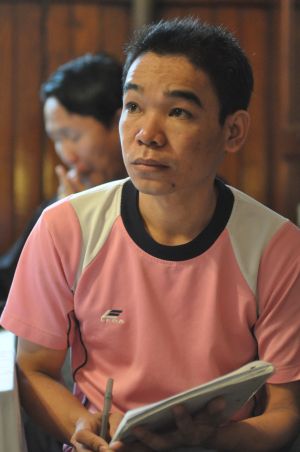 Pae Reh, a Burmese Catholic who is a member of St. Pius X Parish in Indianapolis listens during an Aug. 9 session of a new Burmese catechetical and pastoral formation program. (CNS photo/Natalie Hoefer, The Criterion)

INDIANAPOLIS (CNS) — At 14, Bu Meh of Burma had lived all but the first year of her life in a refugee camp in Thailand. Her family sought safety there after fleeing unrest in their homeland, now known as Myanmar.

In the midst of growing up in the confined, unsettled existence of a refugee camp, Meh learned her Catholic faith.

After 13 years, her family was resettled to Indianapolis in 2009, facing a new country, a new culture and a new language.

The one consistency in her upended world though was her Catholic faith.

“When you have faith, you don’t let someone tell you something is impossible,” Meh, now 19, told The Criterion, newspaper of the Indianapolis Archdiocese. “Through Christ our Lord, all things are possible.”

Meh, a member of St. Pius X Parish in Indianapolis, is one of 15 resettled young adults from Myanmar learning more about their Catholic faith in English through a new catechetical program for Myanmarese immigrants, sponsored by the archdiocesan Office of Intercultural Ministry.

Franciscan Brother Moises Gutierrez, director of the office, the program was created to develop pastoral and catechetical leaders for the Myanmarese population in the archdiocese. The Blessed Isidore Ngei Ko Lat Burmese Pastoral and Catechetical Formation Program offers classes, workshops, lectures and other programs in the native language for the immigrants.

The program is named for the only Myanmarese person on the path to sainthood.

“It turns out he was also a lay catechist, and young like these folks when he was martyred,” Brother Gutierrez said.

About 500 Catholic Myanmarese are active in the archdiocese, he added.

“But it’s not about numbers. Burma is only about 3 percent Catholic, but that makes them so proud and passionate about their faith. We want to walk with them and give them the tools to develop a stronger Burmese Catholic community in the archdiocese. The way you teach (Catholics of a different culture) is a little bit different because the language is different, the culture is different,” Brother Gutierrez said.

The program’s first stage, set to end in September, focuses on defining the Myanmarese-American Catholic identity and the basics of catechesis. Future sessions call for delving deeper into Catholic teaching, theology and the sacraments.

“We went to pastors and pastoral associates,” he explained. “They chose (the participants) not just based on their English, but on their commitment and involvement in the parish. They are so excited about getting training. We thought we’d meet once a month, but they wanted to meet twice a month, so that’s what we’re doing.

“When we first came to St. Pius in 2010, there were just about 100 Burmese,” said Laurence Saw, a Myanmarese Catholic involved in the program. “Now we have almost 300 Burmese Catholics there. As the numbers grow, we need to take care of these people.”

The number of such Catholics is growing not just because of the resettlement refugees. Brother Gutierrez said 25 Myanmarese joined the Catholic Church at Easter. Most are adults.

Pae Reh, a Pius X Parish member, became Catholic in 2012, one year after being resettled in Indianapolis. He participates in the program with his wife, who was Catholic when he met her.

“I want to know more about the faith,” he said. “I want to make my life more perfect. My life is better now with my Catholic faith.”

“Becoming better” is one of the goals of the Office of Intercultural Ministry.

“The pope and the archdiocese are inviting us to be right there with the people, to have an intercultural encounter,” Brother Gutierrez explained.

Hoefer is a reporter for The Criterion, newspaper of the Indianapolis Archdiocese.