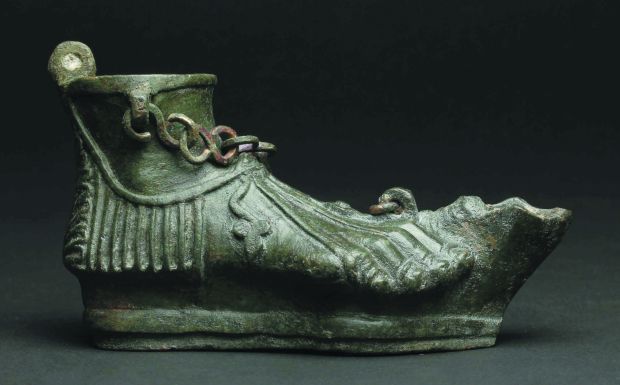 “Over 40 years ago, my wife told me to get a hobby. So I did. To this day, she has second thoughts about saying that,” Deacon Page said.

Recently the hobby led Deacon Page to help identify an extremely rare Christian oil lamp when a Canadian antiquity company contacted the deacon for help identifying symbols on the piece.

Deacon Page, a former high school teacher and twice Fulbright scholar, has spent much of his free time traveling and forging connections with archaeologists and antiquities dealers around the world. Deacon Page has even taken part in an archaeological excavation of the ancient city of Ashkelon, Israel, with Harvard University.

He told the Catholic Sentinel, the Portland archdiocesan newspaper, that studying the items has helped him become more aware of connections between the modern world and ancient peoples and cultures.

At first, Deacon Page was as puzzled as Allan Anawati, director of Medusa Arts in Montreal, over symbols on the bottom of the Lamp. The lamp, shaped like a foot wearing a Greek sandal, indicated the piece was from the first or second century. But one symbol on the piece, a cross, likely would not have been seen on a lamp until more than 200 years later. 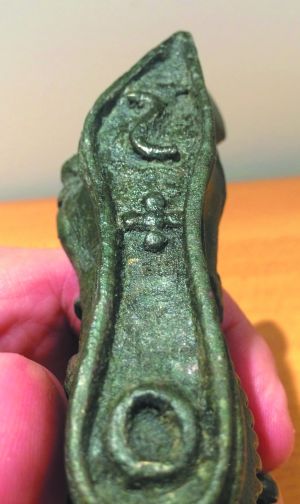 Symbols that cracked the mystery of an extremely rare Christian oil lamp are seen in an undated photo. (CNS photo/courtesy Deacon Rob Page)

“I was very curious to find out if the lamp had come originally from Egypt, Italy or from Syria and the Holy Land area,” Deacon Page said. “When I asked Allan if he could give me any information about it, he said that he did not want to influence my thinking. So I continued my research into the two other symbols that looked like an S and an O.”

He searched source after source and finally came across reference that included the two words, “Opera” and “Sator.”

The entire reference, “Sator arepo tenet opera rotas,” means “the sower/creator in the field controls the workings of his tools.” The Christian interpretation seemed highly probable because an anagram revealed the words “Pater Noster.”

“If the two symbols on the lamp stood for ‘Opera’ and ‘Sator’ … then the lamp would serve as a coded message telling people to walk in the light of Christ and do his work,” Deacon Page said. “This makes perfect sense in the first and second century because it was a time of persecution for the church.”

Official auction data indicated the lamp originally was from Syria. The lamp had been legally transported to the United States, but incrustations obscured the markings that might have led other antiquities experts to make the discovery earlier.

The lamp is bronze, which also reveals that its original owner was rich and important.

“When I hold and look at the lamp, I can sense the deep faith that its owner had. I can imagine an early Christian community coming together in the house of this rich person and celebrating the Eucharist under its light,” Deacon Page said. “It probably was buried in the owner’s grave to give light to Christians who would meet there and to the deceased who awaited the resurrection of the dead and the second coming of Christ.”

Deacon Page has always enjoyed ancient history and has held many awe-inspiring artifacts in his hands. But never, he said, has he had the opportunity to take part in a discovery of this magnitude. Currently, Deacon Page is working with Anawati and an Israeli writer for publication of this discovery.