Lawmakers’ override of vetoes an ‘affirmation that all life matters’ 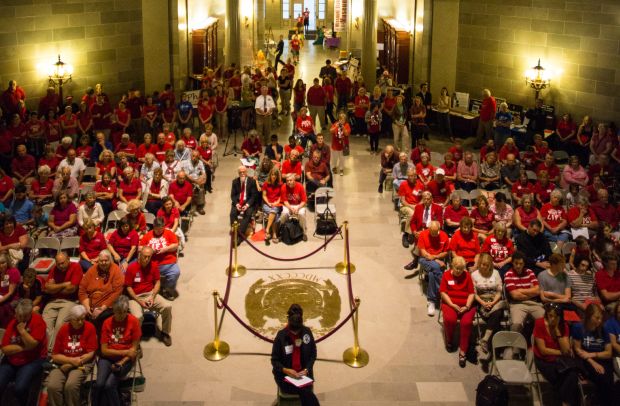 Karen Nolkemper, executive director of the Respect Life Apostolate of the Archdiocese of St. Louis, called the votes “a public affirmation that all life matters, even that of the most vulnerable among us.”

Loud chants, calls to action, reflection, personal witness and even the singing of “Happy Birthday” marked a noon rally in the rotunda of the Missouri Capitol Sept. 10 as 300 to 400 people gathered to urge the state Legislature to override Nixon’s vetoes.

The two major pro-life bills he vetoed were the focus of weekslong lobbying efforts seeking an override by the Legislature.

The Missouri House and Senate began debate on the measures just before the noon rally, which followed a morning prayer vigil sponsored by Show Me Life Missouri. A dozen women spoke at the gathering, including a woman who suffered post-abortion trauma, the grandmother of a child conceived by rape and the former manager of a Planned Parenthood abortion facility.

A large number of bills were being considered for veto override, including several budget items.

As the rally started, the crowd, mostly wearing red, shouted, “Override, override, override” in repetition. The loudest chants came later and were led by about 70 teenagers who came from several schools around the state, including St. Louis Priory School.

The chants followed others from a few dozen supporters of legal abortion on the second-floor balcony. They wore purple T-shirts with the message “Stand With Missouri Women.” Chants of “don’t go back” and “abortion is safe” failed to overpower pro-life speakers.

Before the pro-life rally, as the rally for abortion outside was underway, Bill Winters of Immaculate Heart of Mary Parish in New Melle shouted, “Don’t kill babies,” as he was walking into the state Capitol.

Paula Willmarth of Kansas City, president of the Missouri State Women’s Political Caucus, confronted him and asked him to leave. Winters continued on his way, and Willmarth later explained that she asked him to be respectful of her group’s demonstration, as her group should be of his. But her wish was overruled by her group when they entered the Capitol and tried to disrupt the pro-override rally.

The override speakers repeated the need to stand for life. One was Susan Jaramillo, a native of Jefferson City who lives in Georgia. She told of the three abortions she had before a dramatic change in her life in 2007 and finding out in 2010 that she had been conceived in rape, a secret her mother had kept from her.

Jaramillo was told during her abortions that “in a few days, you’ll be fine, like nothing ever happened.” Only later, she said, she began suffering from guilt and shame, with the decision to abort affecting every area of her life. Her decisions were selfish, she said, especially when compared to her mother’s selfless decision to give birth to her.

Ramona Trevino, former manager of a Planned Parenthood abortion facility in Texas, told of the importance of a 72-hour waiting period’s impact on an abortion operator’s need to have more clients to boost their income. “Women deserve better than to be rushed into a decision … leaving her with a lifetime of pain and regret,” she said.

House Speaker Tim Jones, a Republican from Eureka, told the group that Republicans and Democrats in Missouri are convinced of the need to promote life. “Our nation was founded on moral principles. This is greater than all of us. This comes from the Creator,” he said.

Elice Estrada, a student at a community college in Washington whose family is from St. Louis, was among the people attending the rally. “A lot of young women like myself are misguided by the media, told lies about the dangers of abortion,” she said. “After an abortion, women are more prone to suicide, depression. … They need the time to understand it’s a life, not a mistake.”

Catholic Charities representatives also have lobbied for the charitable tax credits for food pantries, maternity homes and pregnancy resources, saying they provide support for the neediest and most vulnerable in Missouri.

Legislators voted to override the governor’s veto of re-entry grants intended to help reduce recidivism through services that help create dignity for formerly incarcerated individuals. The override reinstates $2 million in grant funding for 4,200 ex-offenders and the 25 statewide organizations that serve them. Another budget item veto that was overridden was funds for alternative to abortion services.

NEXT: Divorce, migration changing the face of families worldwide, in U.S.