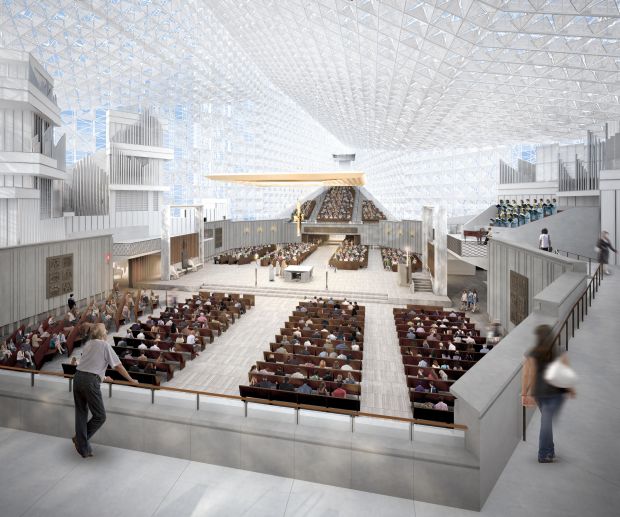 GARDEN GROVE, Calif. (CNS) — Christ Cathedral has a multilayered mission — and with the rollout of the new design plans that will transform the former Crystal Cathedral into the mother church of the Diocese of Orange, it has taken a big step toward realizing that mission.

“We’re trying to create a place that is welcoming to Catholics, certainly, but to people of all faiths, and even of no faith at all,” said cathedral rector Father Christopher Smith at an afternoon news conference Sept. 24. “(To let them) know that they are loved by God. That was the central message of Rev. Robert Schuller.”

Designed by architect Philip Johnson to serve Rev. Schuller’s ministry, the iconic structure is the centerpiece of a 35-acre campus that includes seven buildings. When the Diocese of Orange purchased the campus from Crystal Cathedral Ministries in 2011, it began the long process of transforming it to meet the needs of Orange County’s Catholic community.

The first building to be renovated, the Arboretum, is where Christ Cathedral Parish celebrates Sunday Mass; weekday Mass is celebrated in the neighboring Art Gallery. The diocesan pastoral center has moved onto the campus, and Christ Cathedral Academy is now in its second year of educating students from pre-K through eighth grade.

The Tower of Hope — where Eternal Word Television Network and Immaculate Heart Radio will have studios, and the Pontifical Mission Societies will have an office — is currently under renovation.

And the transformation of the church itself — which closed to visitors late last year — is underway.

From choosing an architect — the diocese ended up hiring two, Johnson Fain to focus on the church and Rios Clementi Hale Studios to focus on the grounds — to selecting a liturgical consultant, from approving design ideas to selecting materials, it has taken more than a year to develop the designs that were unveiled at the news conference.

“It’s probably the first time in the history of the Catholic Church taking a major building of worship from the Protestant Reformed tradition and transforming it into a Catholic church,” said Msgr. Arthur Holquin, episcopal vicar for divine worship. “And not just any Catholic church, but a cathedral.”

The great challenge is to respect Johnson’s iconic design, while transforming the space into a Catholic church. 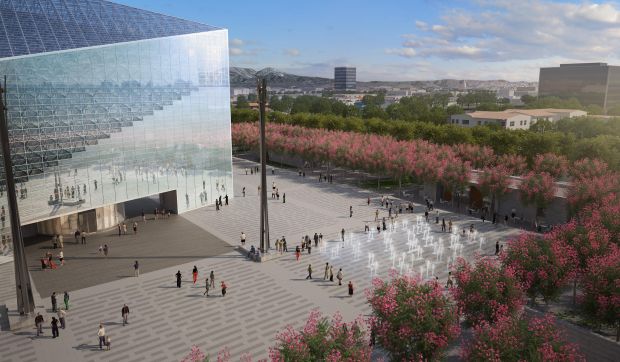 Designed by architect Philip Johnson to serve the Rev. Robert Schuller’s ministry, this iconic structure is the centerpiece of a 35-acre campus that includes seven buildings. (CNS photo/courtesy Roman Catholic Diocese of Orange)

Completed in 1980 and built to seat 2,900 people, Crystal Cathedral was one of the nation’s first megachurches. It is made up of more than 10,000 panes of glass.

With its theater-style seating and focus on the spoken word, the structure lacked many of the characteristics of a Catholic church. Johnson Fain had to develop a plan to incorporate the elements of a Catholic church, including pews and kneelers, as well as those that make a cathedral a cathedral: the altar, the ambo, and the cathedra, or the bishop’s chair.

“We needed to be respectful of this environment (while) integrating these primary liturgical symbols,” he added.

Christ Cathedral will seat 2,100 in an antiphonal design: Worshippers will be seated on the east and west sides of the church, to the side of the altar. It’s a design that hearkens back to both ancient Roman basilicas and the monastic tradition, Orange Bishop Kevin W. Vann pointed out.

Inside the glass structure, a series of quatrefoils will be installed to manage the heat and glare from the sun, as well as to improve the acoustics. Roughly 5-foot square, each quatrefoil is made up of petals that are arranged in a more open or closed fashion, depending on the quatrefoil’s location within the building. The system will reduce the church’s mechanical loads by half, said architect Greg Verabian, a principal with Johnson Fain.

Stone walls also will be added around the lowest levels of the church to improve the acoustics and control the light.

These larger changes, as well as small details — like the pattern on the plaza outside the church itself — are accessible to the public in an exhibit that opens today in the Christ Cathedral Cultural Center.

“It’s very contemporary, yet its imagery is very ancient,” said Father Smith. “(We are transforming) buildings that are already beautiful into buildings that will carry out our purpose as the Roman Catholic Diocese of Orange.”

Deffner is editor of OCCatholicNews.com, the online publication of the Diocese of Orange.