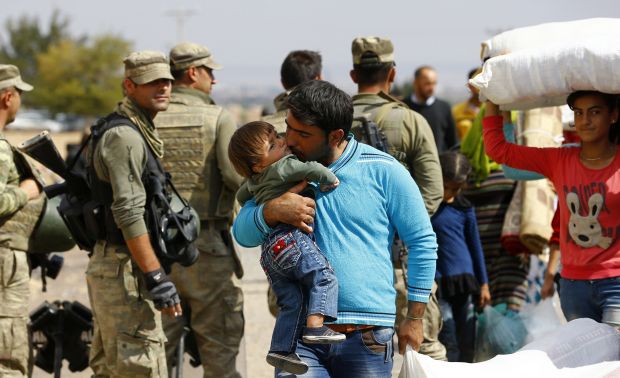 A Syrian Kurdish family walks through a border crossing Sept. 29 to return to their home in the Syrian city of Kobani, on the Turkish-Syrian border. A Syrian priest on a U.S. mission trip says amid ongoing death and destruction in the Middle East, the Catholic Church continues to provide spiritual and material support for those in need. (CNS photo/Murad Sezer, Reuters)

NEW BEDFORD, Mass. (CNS) — After telling parishioners and students in the religious education program at Our Lady of Guadalupe at St. James Parish about what is happening in Syria, Father Rodrigo Miranda was impressed that a 13-year-old girl was one of the first to respond.

“She came up to me and immediately asked: ‘What can we do to help?'” said Father Miranda, a priest of the Institute of the Incarnate Word.

As the current pastor at the cathedral in Aleppo, Syria, Father Miranda is hoping that all Catholics would be just as quick to generously respond to the needs of fellow Christians in the Middle East.

For the past three years, he said, Aleppo has been embroiled in a violent civil war that has destroyed the once-thriving Syrian city that is home to about 2.5 million people. While the vast majority of inhabitants are Muslim, Father Miranda said there is a small contingent of Christians living in Aleppo.

“A few years ago, I’d say maybe 15 percent of the population was Christian,” Father Miranda told The Anchor, newspaper of the Fall River Diocese. “Now, I think it’s closer to 10 percent, if not less. We are clearly the minority within the community.”

He said that not only are Christians in the minority, they often find themselves caught in the middle of the warring factions on either side of the conflict. More than 70,000 people — mostly civilians — have been killed and more than 3 million Syrians have been displaced since the uprising against President Bashar Assad began in March 2011. In addition, some 1.1 million people have taken refuge in Lebanon, Jordan and Turkey.

“The problem is you have Palestinians on one side, Arabs on the other, and the Christians are stuck in the middle,” Father Miranda said.

“Both sides have preconceptions about the other,” he added. “People have their own beliefs and they don’t understand or appreciate the other’s style of life.”

While “everyone receives some form of help from the United Nations,” Father Miranda said Christians must rely solely on the Catholic Church for support.

“Our mission (in Syria) is to evangelize the culture,” Father Miranda said. “We are trying to bring Christ to the people. We go to the places where the church can’t go due to circumstances.”

The priest, who was born in Chile, was ordained in 2006. He previously ministered in Bethlehem, Egypt, Jordan, the Gaza Strip and for a brief time in Argentina, where he got to know the future Pope Francis.

He was working on a master’s degree in fine arts when members of the Institute of the Incarnate Word did a mission near where he lived and talked about the work they were doing, trying to bring Christ to the people.

That brief encounter convinced Father Miranda to give up his studies and career to become a priest, and persuaded him to pursue missionary work, specifically in the Middle East.

Of course he probably never realized what awaited him in Syria.

At the height of the conflict, there was a six-month period when he and his fellow priests were unable to communicate with the outside world, so friends and relatives feared they might be dead.

“We had a bomb attack very near our cathedral, which killed more than 450 people in 10 minutes,” he said. “We had no way to contact people, so our first message posted to Facebook was: ‘We are alive. We are trying to do Christ’s work.'”

Fluent in Spanish, Arabic and English, Father Miranda’s message is clear in any language.

“I think we all need to be more grateful for the blessings we have every day,” he said. “Take, for example, electricity. You have electricity here in the U.S. and you don’t think about it. In Syria, we sometimes have electricity for one hour a day. And without electricity, there are no lights, no telephones, no Internet, not even pumps for water.”

Currently on a mission trip in the U.S. taking him from the Fall River Diocese to New York, Father Miranda noted this was the first time he has been able to travel and let the world know about the devastation in Syria.

If not for the support of the Catholic Church, Father Miranda said the current situation in Syria could be a lot worse.

“In Aleppo, the church prepares and provides 17,000 meals every day for students, children, and workers in colleges and schools,” he said, adding that most of the schools, hospitals and dispensaries have been severely damaged or completely destroyed.

“Like any other parish in world, there is a sense of hope and peace,” he said. “But we have to remain very prudent in our decisions moving forward.”

Going back to that 13-year-old girl’s question — “What can we do to help?” — Father Miranda said there are two ways: prayer and money.

“First, we ask for your prayers,” he said. “Prayer can help you to understand that you are sharing in the suffering with us. … Second we could use economic support.”

Father Miranda said in a country with 33 different sects representing some 60 countries and varied political interests, he answers to just one person — Christ.

“Jesus is the king of peace; without Jesus there is no peace,” he said.

Souza is special projects reporter at The Anchor, newspaper of the Diocese of Fall River.