During his weeklong participation at the 51st annual convention of the National Conference of Diocesan Vocation Directors, held Sept. 19-26 in Long Island, the archbishop made sure he connected with as many priests as he could, to encourage their efforts in helping men to respond to God’s call to the priesthood.

Their work is vital to the future of the church, Archbishop Patron told Catholic News Service.

“Pope Francis says if the younger generation answers God’s call, Christ’s call, they’re going to renew the church,” the archbishop said. “Our hope is that the new generation — guided by good priests, good staff at the seminaries, good formators, good spiritual directors and good vocation directors — will renew the church with their energy, with their enthusiasm and the ideas the Holy Spirit is placing in their hearts.”

The convention drew 280 participants, including 16 bishops and 230 vocation directors from the U.S., Australia, Canada, England, Italy, Mexico, Puerto Rico and Scotland. Each day featured opportunities for prayer, education and fellowship.

Archbishop Patron’s attendance was a welcome sign of papal support for priests who face a variety of challenges as they look to generate priestly vocations for their respective dioceses and eparchies.

One of the biggest challenges is making prayer a priority in their ministry, according to Father Paul Hoesing, who is president of the National Conference of Diocesan Vocation Directors and vocation director for the Archdiocese of Omaha, Nebraska.

Prayer should be the go-to tool in the toolbox of every vocation director, said Father Hoesing. 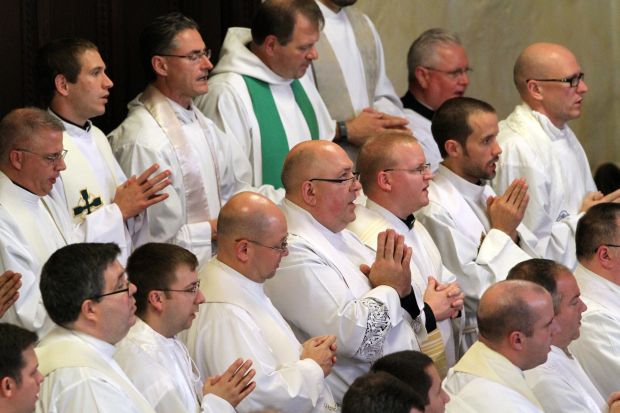 “I look at St. Francis of Assisi,” he said. “People thought he must have been a great leader because he started a great movement. No, he just asked God for things. He prayed and asked.”

“We have to teach young men and women how to pray in a way, as Pope Francis says, for most to have that daily encounter with Jesus,” said Father Torres. “If they have that encounter, any fears, any concerns, the resistance from the world will be loved away, will be melted.”

To help address this concern, the national organization plans to release a book geared to helping young adults improve their prayer lives, Father Torres said. The book, “Have I Been With You? Personal Prayer for Young Disciples,” will be available through its website, www.ncdvd.org, in late October.

As chair of the NCDVD’s Hispanic Vocations Committee, Father Torres also spearheads the conference’s efforts to overcome another challenge: getting more Hispanic men to consider the call to priestly service. According to the U.S. bishops’ Committee on Clergy, Consecrated Life and Vocations, 54 percent of U.S. Catholics under the age of 25 are Hispanic. Meanwhile, Hispanics account for only 15 percent of students in major seminaries.

“We’re not getting the amount of priests to keep up with the growth of the Hispanic population,” said Father Torres, who led a listening session on the issue at the convention.

“Our goal is to begin to address what we can do for those Hispanics that are in this country and speak English, and how we can reach out to them.”

He said the NCDVD is planning a series of workshops throughout the country in 2015 to help vocation directors address the more “regional realities” of the issue.

The goal, Father Torres said, is to “train vocation directors to know where they are in terms of their own cultural inventory, how they approach a different culture, in this case Hispanic, how to engage that family, that parish, that young man to come to believe that there’s something that he needs to explore, a call.”

Father Shawn McKnight, executive director of the Secretariat of Clergy, Consecrated Life and Vocations at the U.S. Conference of Catholic Bishops, said a difficulty for vocation directors is the “negative stance” many parents harbor when a child is interested in discerning a call to the priesthood or religious life.

“This is especially the case among Hispanic families,” Father McKnight said. “They’re not always positive about their son or daughter becoming a priest or religious sister, although they are very happy to encourage their extended family members to become priests and sisters.”

Convincing a parent to trust in the discernment process is a challenge all vocation directors face, regardless of the family’s cultural background, Father McKnight said.

Communication and open dialogue between parent and child is essential, the priest said.

“The best way is to talk openly about it,” Father McKnight said. “A parent is going to be fearful for their son or daughter, no matter what they do, even if it’s the choice of a spouse, for example. That’s normal. You have to talk about it. You have to have some way to deal with it.”

Vocation directors also can connect parents of those considering a vocation with parents of seminarians and newly ordained priests, so “those who have gone through the process can speak of their wisdom in dealing with those fears and concerns,” Father McKnight said.

The vocation ministry is clearly not for the meek of heart. Effort and hard work don’t guarantee success and, in some cases, can lead to burnout or a transfer to another diocesan department or parish.

According to the NCDVD, which provides year-round support and outreach to those in the ministry, an average of 45 new vocation directors are appointed each year in U.S. dioceses. The average tenure for a vocation director is five to six years.

“The work is rather stressful,” admitted Father Jim Crisman, the organization’s vice president and vocation director for the Archdiocese of Denver. “Oftentimes we feel pressure to produce ‘numbers.'”

Despite this, Father Crisman remains enthusiastic.

“I love the ministry,” he said. “I find it a blessed opportunity to enter with these young men into a process of looking at the priesthood which I love so much. It’s a great chance for me to say this is what the Lord might be calling you to, come a little bit closer.”

The zeal for the ministry expressed by Father Crisman and other priests at the convention left an impression on Archbishop Patron.

“The Holy Father always stresses joy, the joy of the Gospel,” the archbishop said. “I’m very glad to see how the vocation directors in the United States are joyful in living their own priestly vocation. They have listened to and answered God’s call.”

PREVIOUS: Syrian priest says church carries on its ministry to people amid strife

NEXT: Woman in top vocations job feels called by God ‘to support his sons’