At wedding, pope says spouses make each other better men and women 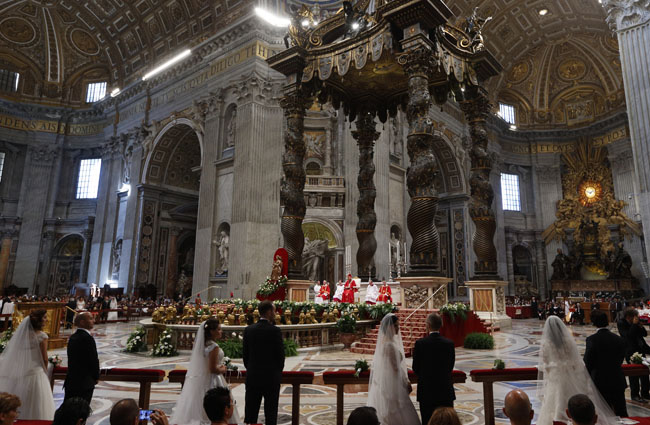 Pope Francis celebrates the marriage rite for 20 couples during a Mass in St. Peter's Basilica at the Vatican Sept. 14. (CNS photo/Paul Haring)

VATICAN CITY (CNS) — Presiding over the wedding of 20 couples in St. Peter’s Basilica, Pope Francis celebrated marriage as the union of a man and woman playing complementary roles during their common journey through life.

The pope spoke during a wedding Mass for couples from the diocese of Rome.

But the pope assured the brides and grooms that Christ’s redemptive sacrifice would enable them to resist the “dangerous temptation of discouragement, infidelity, weakness, abandonment.” 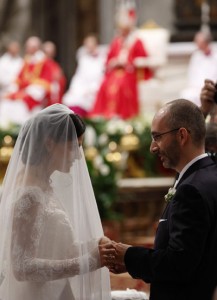 New spouses exchange rings as Pope Francis, pictured in the background, celebrates the marriage rite for 20 couples during a Mass in St. Peter’s Basilica at the Vatican Sept. 14. (CNS photo/Paul Haring)

“The love of Christ, which has blessed and sanctified the union of husband and wife, is able to sustain their love and to renew it when, humanly speaking, it becomes lost, wounded or worn out,” he said.

“It is normal for a husband and wife to argue,” he said. “It always happens. But my advice is this: never let the day end without having first made peace. Never. A small gesture is sufficient. Thus the journey may continue.”

Speaking three weeks before the start of an extraordinary Synod of Bishops on the family, the pope emphasized the importance of the institution based on marriage.

“It is impossible to quantify the strength and depth of humanity contained in a family: mutual help, educational support, relationships developing as family members mature, the sharing of joys and difficulties,” he said. “Families are the first place in which we are formed as persons and, at the same time, the bricks for the building up of society.”

The newlyweds ranged in age from 25 to 56 and represented a variety of situations, with some already having children or having lived together before marriage. 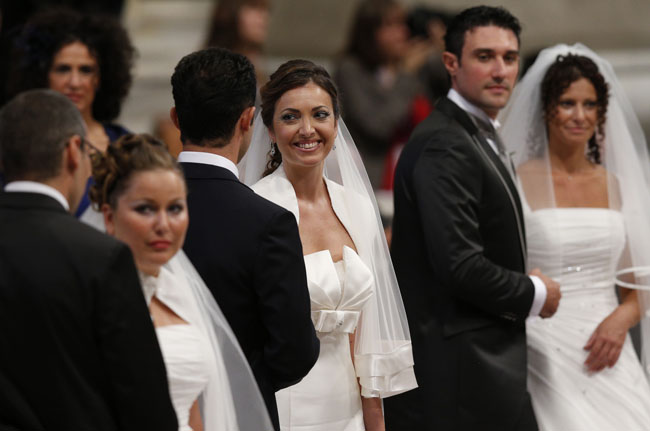 Newly married couples Marco Purcaro and Laura Capurso, center, and Fiorenzo Genito and Lidia Tortora, right, react after exchanging vows as Pope Francis celebrates the marriage rite for 20 couples during a Mass in St. Peter’s Basilica at the Vatican Sept. 14. At left is Flaviano Picchi and Giulia Capozi, who are preparing to exchange vows. (CNS photo/Paul Haring)

Cohabitation, though not a canonical impediment to marriage, violates the Catholic Church’s teaching on marriage and sexual love. Pastoral ministers helping Catholic couples prepare for the sacrament are urged to encourage them to regularize such situations prior to marrying.

At the start of the papal wedding Mass, the brides, wearing traditional white gowns, were accompanied up the aisle of the basilica by their fathers or other male relatives. The grooms entered with their mothers. The pope called out each couple’s names as he read the rite and then each couple, groom and bride, separately, responded “si.”

As a thank-you present to the pope, the couples jointly contributed to an educational and recreational center for disadvantaged youth in a suburban neighborhood of Rome, to be established by the local branch of Caritas.

The ceremony was the first public papal celebration of a wedding since 2000, when St. John Paul II joined in marriage eight couples from different parts of the world as part of the Jubilee for Families. He also publicly presided over another joint wedding for a group of couples in 1994 as part of his celebration of the International Year of the Family.