Troubled by war, pope recalls its shocking legacy of indifference 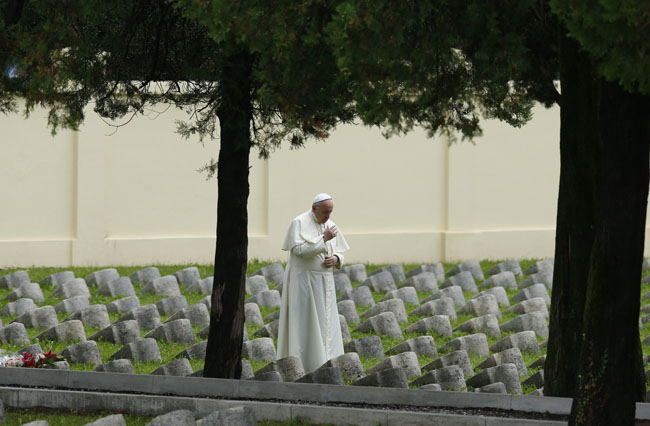 Pope Francis prays at an Austro-Hungarian cemetery for soldiers of World War I in Fogliano di Redipuglia, Italy, Sept. 13. The pope prayed for the fallen of all wars and also celebrated an outdoor Mass in front of the nearby Redipuglia war memorial, which honors the 100,000 Italian soldiers who died during World War I. (CNS photo/Paul Haring) 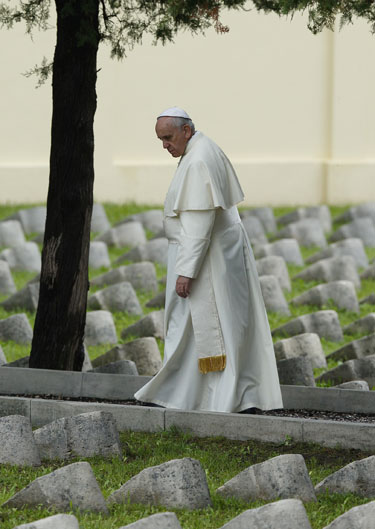 Pope Francis looks a tombstones as he walks through the Austro-Hungarian cemetery for soldiers of World War I in Fogliano di Redipuglia, Italy, Sept. 13. (CNS photo/Paul Haring)

VATICAN CITY (CNS) — When will people ever learn that war is madness and conflicts are only resolved by forgiveness, Pope Francis asked.

The pope said it is believed that more than 8 million soldiers and 7 million civilians died during World War I — a four-year-long conflict that began 100 years ago.

The number of so many lost lives “lets us see how much war is insanity,” Pope Francis said after praying the Angelus with those gathered in St. Peter’s Square Sept. 14, the feast of the Exaltation of the Holy Cross.

“When will we learn this lesson?” he asked, telling people to look at the crucified Christ “to understand that hatred and evil are defeated with forgiveness and good, and to understand that responding with war only augments evil and death.”

The pope’s remarks came the day after a morning visit to Italy’s largest war memorial — Redipuglia, a town in northeast Italy near the border with Slovenia. Giovanni Bergoglio, the pope’s Italian grandfather who later immigrated to Argentina, fought nearby during the Italian campaign against the Austro-Hungarian Empire.

The memorial made of enormous stone steps leading to three bronze crosses pays homage to more than 100,000 Italian soldiers. while a nearby military cemetery is the final resting place for some 15,000 Austro-Hungarian soldiers — all of whom lost their lives in nearby battlefields. The pope laid a floral wreath at the cemetery, celebrated Mass at the memorial, and prayed for all victims of all wars.

The gorgeous landscape used to be a place where men and women worked hard to raise their families, children played and the elderly daydreamed, he said in his homily.

Instead of safeguarding God’s creation, especially his “most beautiful of all, the human being,” people have set about destroying it through war, he said.

“Greed, intolerance, a lust for power, these are the reasons that incite decisions to go to war,” he said.

Also, “behind the scenes, there are special interests, geopolitical plots, lust for money,” he said, as well as the powerful arms industry.

But the most shocking aspect of so much bloodshed is the continued legacy of indifference, the pope said. Being indifferent began with Cain murdering his brother Abel and then rebuking God for asking where his now dead brother was, replying, “Am I my brother’s keeper?”

Above the tombs of so many dead, Pope Francis said, “hovers the sneering motto of war” — Cain’s complaint of “What do I care?”

“All these people, here in eternal rest, they had plans, had dreams, but their lives were broken. Why? Because humanity said, ‘What do I care?'”

Today the world is still up in arms with a kind of “World War III (waged) ‘in bits and pieces’ with criminal acts, massacres and destruction,” he said.

“To be honest, the newspaper front page should have the headline: ‘What do I care?'”

“Those who plot terror, organizations fueling conflict, as well as arms manufacturers, all have ‘What do I care’ engraved in their hearts,” he said.

And like Cain, their hearts have become so corrupt, “they’ve lost the ability to cry,” much less do what Jesus asks — to help the sick, the wounded and the hungry, the pope said.

The pope asked people to pray that their heart be transformed from one that has stopped caring to one that can weep “for all those who have fallen in useless massacres, for all the victims of the insanity of war of every era. Tears. Brothers and sisters, humanity needs to cry, this is the moment to cry.”

NEXT: At wedding, pope says spouses make each other better men and women