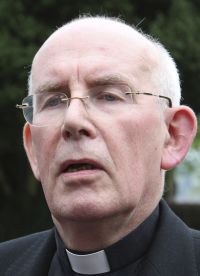 DUBLIN (CNS) — The 2013 conclave that elected Pope Francis was “the highlight of my life,” said Cardinal Sean Brady, the day the pope accepted his resignation as archbishop of Armagh, Northern Ireland.

Pope Francis “challenges and inspires me” with the “message of God having mercy and at the same time choosing us, despite our sinfulness,” the cardinal told people gathered in St. Patrick’s Cathedral in Armagh. “It reminds me that I, too, need to say sorry and to ask forgiveness. And I do so again, now.”

Cardinal Brady spoke Sept. 8, the day it was announced at the Vatican that Pope Francis had accepted his resignation, which bishops must submit when they turn 75. The cardinal, who as archbishop of Armagh serves as primate of all Ireland, will be replaced by Archbishop Eamon Martin, who has served as coadjutor since early 2013.

“It has been my privilege to have been appointed a bishop by Pope St. John Paul II, to have worked closely with Pope Benedict XVI, and to have taken part in the conclave that elected Pope Francis — that conclave has been the highlight of my life,” he said.

“The people of the Archdiocese of Armagh and the people of Ireland will remain in my prayers for the rest of my life. I ask the favor of your prayers to help me continue to serve God as best I can all the days God gives me,” he said.

Cardinal Brady was ordained a priest in 1964 and was initially appointed to teach in a Catholic high school while serving as a part-time secretary to the late Bishop Francis McKiernan of Kilmore.

It was in this role that he assisted in a canonical inquiry into a priest who had been accused of abuse. Then-Father Brady interviewed a 14-year-old boy who alleged he had been abused by Norbertine Father Brendan Smyth. The allegations were not shared with the civil authorities, and Father Smyth went on to abuse in Northern Ireland, the Irish Republic and the United States; he was arrested and imprisoned in 1994.

When Cardinal Brady’s role came to light in 2010, he faced serious pressure and calls for his resignation. However, he refused to quit, but admitted he had done wrong, sought forgiveness and pledged to stay on, describing himself as a “wounded healer.”

During his time as president of the Irish bishops’ conference, Cardinal Brady was responsible for the adoption of stringent child-safeguarding procedures on both sides of the Irish border that have won praise from the civil authorities in both jurisdictions. He also spearheaded a zero-tolerance approach to abuse and insisted that all allegations are passed on to the civil authorities.

In a bid to ensure confidence in the new procedures, he established the National Board for Safeguarding Children in the Catholic Church as an independent watchdog to ensure that the church was following its own guidelines when it came to the protection of children and vulnerable adults.

As an archbishop whose diocese straddles the border between Northern Ireland and the Irish Republic, he keenly followed events that led to the 1998 Good Friday peace agreement in Northern Ireland.

In 2001, he led his fellow bishops in supporting a radical program of reform of policing that would phase out the sectarian Royal Ulster Constabulary and replace it with the Police Service of Northern Ireland, which had an affirmative action policy to ensure equal recruitment from the Catholic and Protestant communities.

He showed a passion for ecumenism. The Rev. Donald Watts, co-chair of the Irish Inter Church Meeting and president of the Irish Council of Churches, said the cardinal made an “enormous contribution to interchurch relations in Ireland.

“He chaired meetings with a gentle humility that has enabled rich dialogue and built understanding. As he retires, we enjoy unprecedented positive relationships between our member Churches,” Rev. Watts said.

NEXT: New Irish primate sees role as servant, not like CEO position