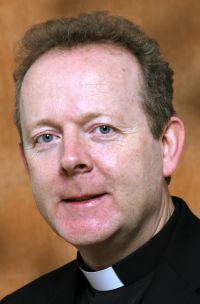 ARMAGH, Northern Ireland (CNS) — The new primate of All Ireland has pledged to be a “servant leader” whose aim is to bring the Irish Catholic Church through a process of “humble renewal.”

Archbishop Eamon Martin, 52, succeeded Cardinal Sean Brady as primate of All Ireland, a leadership role that covers the 26 dioceses in the Irish Republic and Northern Ireland. For nearly 17 months, Archbishop Martin had served as Cardinal Brady’s coadjutor in Armagh, and his succession was automatic when Pope Francis accepted Cardinal Brady’s resignation Sept. 8.

The new Irish primate told Catholic News Service that his priorities would be “to get to know my people and to facilitate a movement that will allow people to be confident in their faith without being polemical and condemnatory.”

Dismissing those who see the role of primate as “some kind of massive CEO position” he said it is a figurative and honorary position because of Armagh’s significance as the see of St. Patrick.

“It is a kind of a servant leadership rather than any big hierarchical leadership or position of power,” he told CNS.

He said that even though people are living in a very fast world with many commitments pulling them this way and that, he believed “people still need God in their lives, and they need their church.”

“There is still a lot of hope in people that they would like a renewal of their church,” he said, but he cautioned against being overly optimistic.

“I am only one person. I wouldn’t want to give any impression that somehow I can work miracles for the church in Ireland,” he said.

Explaining his concept of “humble renewal” he said it was not about “building up some big edifice or some triumphalist church or trying to make sure that it dominates politics and the state.”

He added, “A church that is humble is a church on our knees, hopefully in prayer, recognizing the terrible things that have happened in the past and the need to ask God’s mercy and to ask forgiveness of people.”

Archbishop Martin said he also would work quietly with the other bishops to encourage the faithful.

“To encourage is to put fresh heart into people. If I can in some way give people new heart, then I’ll feel that I am fulfilling what God is calling me to do,” he said.

“Please God I will be given the strength and the guidance that will help to build the church up in the days ahead,” Archbishop Martin said.

In a statement, Archbishop Martin referred to his predecessor as a “gentle and humble man who is never fully comfortable in the limelight.” He also paid tribute to Cardinal Brady’s “tireless commitment to representing the Catholic Church in Ireland.”