Couples with kids, cohabitating are among those marrying at papal Mass 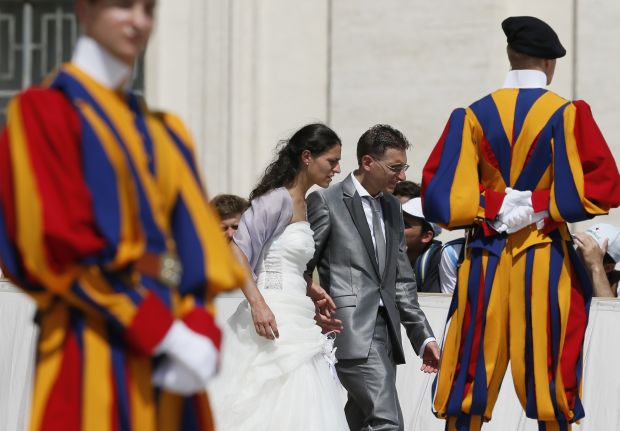 VATICAN CITY (CNS) — Among the men and women Pope Francis was set to unite in marriage were Catholics who have been living together as well as couples who already have children.

The pope, who is the bishop of Rome, will preside over his first wedding ceremony as pontiff during a nuptial Mass in St. Peter’s Basilica Sept. 14.

The event, which will see 20 couples from the Diocese of Rome celebrate the Sacrament of Marriage, was organized by the vicariate of Rome.

“Those who will get married Sunday are couples like many others,” the diocese said in a press release Sept. 10.

The ages of the brides and grooms range from the youngest being 25 to the oldest being 56, the vicariate said.

It said the couples also come from all kinds of situations with some “who have been engaged for a long period of time or for not as long; there are those who are already cohabitating; who already have children; who got to know each other in church,” it said.

While cohabitation is not in itself a canonical impediment to marriage, it is contrary to the church’s teaching on marriage and sexual love. The church urges that pastoral ministers help couples preparing for marriage by showing them the witness of Christian family life in such a way as they may regularize their situation before their wedding ceremony.

One of the brides, identified only as Gabriella, has never been married, but she had a daughter when she was quite young, she told the Italian daily La Repubblica Sept. 9. Her grown daughter will also attend the ceremony at the Vatican, Gabriella said.

Gabriella’s fiance, Guido, has had an annulment, the newspaper said.

“We’ve known each other for five years and our wanting to get married in the church stems from no longer wanting to live in a union and with feelings that are deprived of some of the sacraments,” the couple said.

When their parish told them about the possibility of having their marriage in the church presided over by the pope, they said they were shocked. “We didn’t feel worthy, because of our age and personal background.”

The papal Mass celebrating the couples’ marriage will come just a few weeks before the start of the extraordinary Synod of Bishops on the family, Oct. 5-19.

Pope Francis has said the church’s pastoral approach to helping couples must be “intelligent, courageous and full of love” because the family today is “looked down upon and mistreated.”

He told the world’s cardinals in February that reflections on the family “must keep before us the beauty of the family and marriage, the greatness of this human reality, which is so simple, yet so rich, made up of joys and hopes, of struggles and sufferings.”

The mid-September ceremony will be the first public papal celebration of a wedding since 2000, when St. John Paul II joined in marriage eight couples from different parts of the world as part of the Jubilee for Families. He also publicly presided over another joint wedding for a group of couples in 1994 as part of his celebration of the International Year of the Family.

NEXT: ‘It pierced my heart like a knife,’ nun says after visit to Iraqis