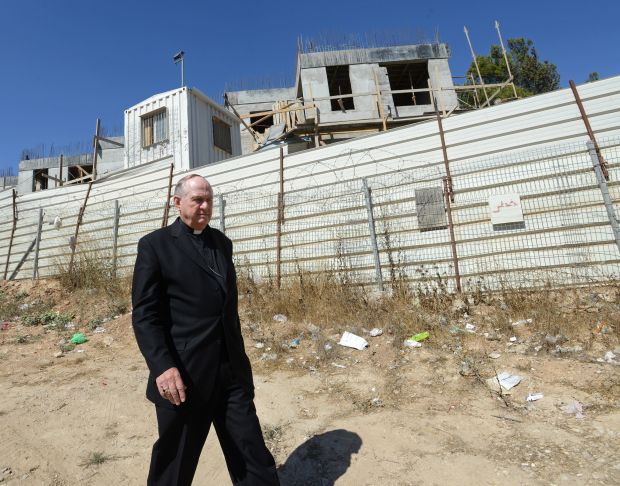 Bishop Richard E. Pates of Des Moines, Iowa, walks along the Israeli settlement construction in Sheikh Jarrah in East Jerusalem Sept. 12. Bishop Pates was one of 18 bishops on a nine-day prayer pilgrimage for peace in the Holy Land. (CNS photo/Debbie Hill)

JERUSALEM (CNS) — U.S. bishops visiting the Holy Land said an on-the-ground tour and briefing about the situation in East Jerusalem heightened their awareness of the settlement issue in the divided city.

“The expansion of settlements is quickly driving (the possibility of a two-state solution) off the drawing board,” said Bishop Richard E. Pates of Des Moines, Iowa, chairman of the U.S. bishops’ Committee on International Justice and Peace. “The continuing expansion of the Jewish communities and its implication for a two-state solution has been a concern of the National Interreligious Leadership Initiative for Peace in the Middle East.”

On a two-hour tour, Israeli attorney and activist Daniel Seidemann shared his concerns for the increasingly shrinking window of opportunity to push forward the concept of the two-state solution to the Palestinian-Israeli conflict.

The group visited the sites of small Jewish enclaves being built in the East Jerusalem neighborhood of Sheikh Jarrah, which abuts the 1967 border with West Jerusalem.

The bishops also viewed the desert corridor northeast of Jerusalem. The corridor, known as E1, has been designated by Israel for a Jewish settlement that would connect the largest settlement in the West Bank, the 30,000-resident city of Ma’aleh Adumim, with Jerusalem. That would, in effect, cut off that area of the Palestinian West Bank from any connection to Jerusalem, contributing to a further cantonization of the West Bank and destroying the possibility of creating a contiguous Palestinian state, said Seidemann.

The tour included a visit to the Israeli separation barrier that divides the East Jerusalem neighborhood of Abu Dis, running across the road that, traditionally since Biblical times, has led to Jericho.

In an envisioned peace agreement, most of the 200,000 Jews living in East Jerusalem would be permitted to remain in exchange for land of equal quality and size elsewhere in the West Bank, noted Seidemann. He said while the Israeli enclaves embedded in East Jerusalem remain small, with at most 2,500 Israeli Jews living there, it is still possible to withdraw them, but that if the settlements continue to expand the situation will become more complicated.

The next two to three years are critical if a peace agreement is to be reached, he told the bishops.

“Seven years ago in order to get to where the border needs to be (to reach an agreement), we would need to relocate 100,000 settlers. Today, we will need to relocate 150,000. If it continues to grow, at some point it will not be feasible for the national leaders to relocate hundreds of thousands of settlers. It will be so Balkanized it won’t be possible,” said Seidemann.

Bishop Pates said the bishops’ visit was intended to support the peace process.

“The importance of Jerusalem (in the negotiations) has been heightened as well as the necessity to maintain ourselves open to all religious communities (here), particularly the Jews, Christians and Muslims,” he said. “This visit enables us to focus on this reality and to coalesce behind the Vatican initiative to insist on international guarantees of this religious expression in Jerusalem.”

Retired Bishop Howard J. Hubbard of Albany, New York, said the bishops would need to listen to other narratives before they can come up with some recommendations about what needs to be done on both sides. Nevertheless, he said, Seidemann’s briefing had captured very well “the frustration the people living in East Jerusalem are experiencing, especially with the settlements.”

“It is suddenly clear that if this is not addressed aggressively and immediately, a two-state solution will no longer be viable,” he said.

Bishop Oscar Cantu of Las Cruces, New Mexico, noted the importance of learning more about the intricacies of the situation although he has been aware of the churches’ support for the two-state solution.

The possibility of losing the window of opportunity to reach a viable solution is “alarming,” he said, and increases the need for religious leaders to pray for peace and to encourage political leaders to work towards a just solution.

“This story has been a long time in the making. It is not only political but also a religious and human one. Coming here has certainly cemented for us the human lives which are affected by this situation — Muslim, Christian and Jewish,” Bishop Cantu said.

The group of 18 bishops from the United States began their nine-day pilgrimage Sept. 11 and celebrated Mass with Latin Patriarch Fouad Twal of Jerusalem following the Sept. 12 tour.

Later in the day they were to meet with Franciscan Father Pierbattista Pizzaballa, custos of the Holy Land, and participate in an interfaith Sabbath eve prayer at a local Jewish synagogue.

More interfaith and ecumenical prayers were scheduled during the visit. The bishops were also to visit Christian, Muslim and Jewish holy sites in Jerusalem and Galilee, as well as meet with Israeli and Palestinian political leaders.

NEXT: Senator earns bishop’s ire for comments at summit on Mideast Christians