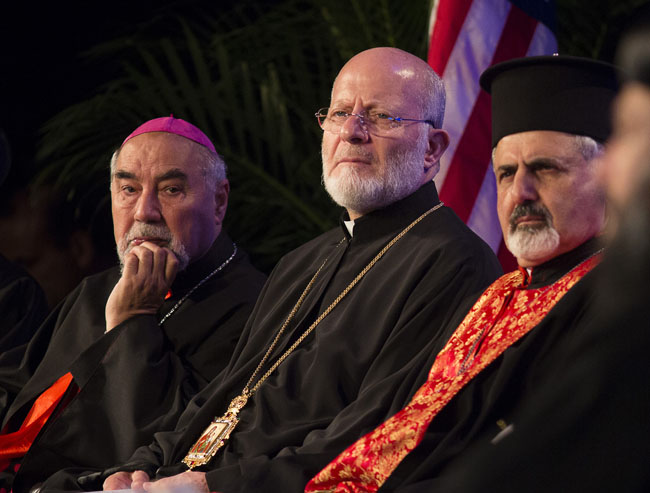 WASHINGTON (CNS) — A Catholic bishop criticized Sen. Ted Cruz, R-Texas, for politicizing a conference of diverse political and church leaders working on behalf of Christians and other minorities in the Middle East.

“When you come to a hard political stance on anything, it’s going to cause a flare-up, and that’s what happened last night,” Maronite Bishop Gregory J. Mansour of Brooklyn, New York, told Catholic News Service Sept. 11.

Cruz was a keynote speaker at the gala solidarity dinner at the inaugural summit of In Defense of Christians, a new organization with the aim of shaping policy and heightening awareness of Christians in the Middle East.

The conference brought together more than 500 politicians, church leaders — including Catholic and Orthodox patriarchs flown in from the Middle East — and Christians in the diaspora. The patriarchs emphasized that their differences did not preclude unity on behalf of all minorities in the Middle East.

Cruz, touted as a potential Republican candidate for president in 2016, left the stage after he was booed for saying that Christians have no better ally than Israel.

Bishop Mansour said he felt Cruz “had a litmus test for us: If we don’t stand with Israel, then he won’t stand with us. Well, that’s not an approach that is viable for a Christian.

“Christians don’t ally themselves to any state,” said Bishop Mansour. “We are not allied to the state — to the United States or to Iraq, or to Syria. Christians must be free to engage their society, to build up what is beautiful in it, and to critique what is not.”

Jesuit Father Drew Christiansen, distinguished professor of ethics and global development at Georgetown University, attended the conference but was not at the gala.

In a blog for ncronline.org, scheduled for publication Sept. 15, Father Christiansen contrasted the unanimity of the patriarchs’ message on Christians with Cruz’s remarks, which he called “divisive.”

“Members of the audience responded that calls made by Cruz and other speakers for respect for Jews and their inclusion in a pluralist Middle East had met with wide approval,” wrote Father Christiansen, who has spent years advocating for Mideast Christians in his work as a policy adviser for the U.S. bishops’ conference and as editor of America magazine.

“It was Cruz’s assertion that Israel was an ally of Middle Eastern Christians to which they objected,” he wrote. “They felt that their effort to build a coalition had been hijacked for the sake of Cruz’s own political ambitions and the ultra-Zionist cause.”

Bishop Mansour, who said he liked Cruz personally, told CNS: “I ran after him, and I saw him, face to face, as you and I are talking. He was very upset.”

But he pointed out that many in the audience at the gala dinner were Palestinian Christians.

“We’ve been very careful, all the organizers and everybody involved,” said Bishop Mansour. “The only one who was not very careful was Sen. Cruz.”

“He made it very clear about defense of Jews and defense of Christians, but he did not mention defense of Muslims,” said Bishop Mansour. He said everyone at the conference had been “very careful to defend the best of the Muslim tradition and to condemn the worst in it.”

The bishop noted that 18 congressmen and senators had had talks with the Christian leaders on Capitol Hill without any kind of animosity.

After Cruz left the stage, one of the event organizers chastised the crowd, and In Defense of Christians posted a statement on its website from its president, Toufic Baaklini:

“As (Lebanese) Cardinal (Bechara) Rai so eloquently put it to the attendees of the In Defense of Christians’ inaugural summit gala dinner: ‘At every wedding, there are a few problems.’ In this case, a few politically motivated opportunists chose to divide a room that for more than 48 hours sought unity in opposing the shared threat of genocide, faced not only by our Christian brothers and sisters, but our Jewish brothers and sisters and people of all other faiths and all people of good will.

“Tonight’s injection of politics when the focus should have been on unity and faith momentarily played into the hands of a few who do not adhere to IDC’s principles. They were made no longer welcome,” the statement said, without indicating whether that meant the hecklers or Cruz.

The senator also posted a statement on his website:

“Tonight in Washington should have been a night of unity as we came together for the inaugural event for a group that calls itself ‘In Defense of Christians.’ Instead, it unfortunately deteriorated into a shameful display of bigotry and hatred,” the statement said.

“When I spoke in strong support of Israel and the Jewish people, who are being persecuted and murdered by the same vicious terrorists who are also slaughtering Christians, many Christians in the audience applauded. But, sadly, a vocal and angry minority of attendees at the conference tried to shout down my expression of solidarity with Israel.

NEXT: Troubled by war, pope recalls its shocking legacy of indifference