Pope: Albania proves to world that diverse religions can live in peace 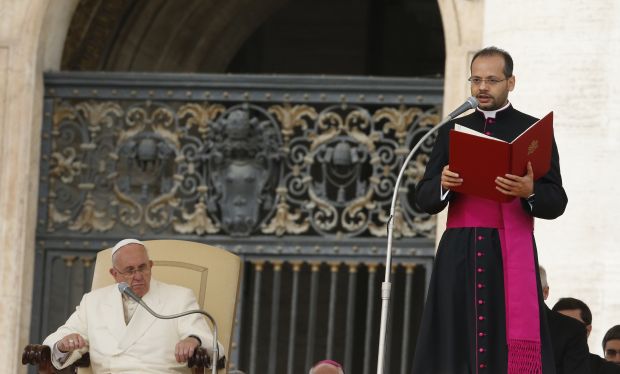 A priest reads a summary in Arabic of Pope Francis' talk during the pope's general audience in St. Peter's Square at the Vatican Sept. 24. (CNS photo/Paul Haring)

VATICAN CITY (CNS) — People of different religious beliefs can and must live together in peace, Pope Francis said.

The Muslim majority and Christian minorities in Albania cooperate beautifully for the common good and prove to the world that it can be done, he said.

“I could see, with great satisfaction, that the peaceful and fruitful coexistence between people and communities belonging to different religions is not only beneficial, but is concretely possible and practical. They put it into practice” in Albania, he said.

He told the more than 30,000 people in the square that he wanted to visit a country where people of different religious traditions were peacefully living and working together, despite suffering decades of violent oppression “by an atheist and heartless regime.”

“I thought it seemed important to encourage them on this path” of religious respect and to urge them to never give up looking for ways to benefit the common good, he said.

Catholics make up only about 16 percent of Albania’s 3 million inhabitants; about 65 percent are Muslim and 20 percent Orthodox.

Pope Francis said the different communities are engaged in an “authentic dialogue” that “avoids relativism” or a watering down of their own religious beliefs in order to find common ground. Each community takes into account each other’s identity and what unites them is the genuine willingness “to do good” and serve their neighbor.

The pope said another reason he went to the Balkan nation was to express his gratitude and to honor all those who held on tight to their faith, despite the risk of arrest, torture, incarceration and execution. People of all religious beliefs were persecuted between 1944 and 1991 as Albania’s dictator-led government waged a war against religion and became the first officially atheist nation in the world.

“They were dark years during which religious liberty was razed to the ground” and hundreds of lives were lost, he said.

Those who refused to renounce their beliefs show how “martyrs are not losers, but the winners; in their heroic witness shines the omnipotence of God, who always consoles his people, opens new paths and horizons of hope.”

He said remembering such “dramatic events” from the past was critical for the country’s future and for making sure the sacrifice of so many men and women did not happen in vain.

The only way to confront the future and present difficulties, he said, is by drawing upon God for the needed strength, courage and hope, just like the martyrs did.

“The strength of the church isn’t grounded so much in its organizational or structural capacity,” he said. While such structure is necessary, the church’s strength “is Christ’s love, a strength that bolsters us during difficult times” and inspires Christians to offer everyone “goodness and forgiveness, giving witness to God’s mercy.”

The thousands of people in the square broke into applause after the pope told them to pay their regards to the hardworking and “courageous people” of Albania who “seek unity in peace.”