Pope, in Albania, says killing in God’s name is sacrilege 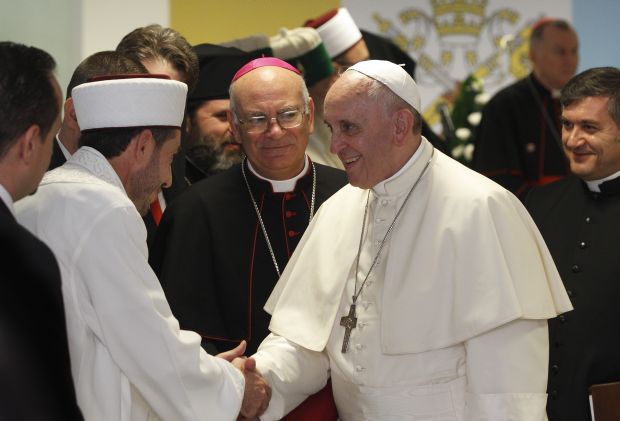 Pope Francis greets a Muslim representative during a meeting with leaders of other religions at the Catholic University of Our Lady of Good Counsel in Tirana, Albania, Sept. 21. (CNS photo/Paul Haring)

TIRANA, Albania (CNS) — Killing in the name of God is sacrilege, and religious leaders must denounce the use of faith to justify violence and oppression, Pope Francis said during a one-day visit to Albania.

In a world “where an authentic religious spirit is being perverted and where religious differences are being distorted and exploited,” Albania is an “aspiring example” to everyone that peaceful coexistence is possible, Pope Francis told Albania President Bujar Nishani and other dignitaries upon his arrival in the country Sept. 21.

No one should “consider themselves to be the ‘armor’ of God while planning and carrying out acts of violence and oppression,” the pope said.

The pope told reporters on the papal plane he chose to visit the Balkan nation because the peaceful collaboration between its Muslim-majority population and minority Catholic and Orthodox communities “is a beautiful sign for the world.”

“It’s a signal I want to send,” he said, that religion, far from causing division, is the very foundation of freedom and brotherhood.

In a meeting with Muslim, Christian and Catholic leaders and representatives, Pope Francis said “authentic religion is a source of peace, not violence” and any “distorted use of religion must be firmly refuted as false.”

The pope encouraged Albania’s religious communities to continue working toward the common good. 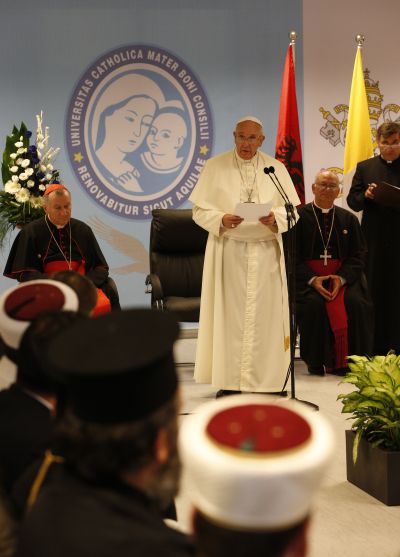 Pope Francis speaks during a meeting with leaders of other religions at the Catholic University of Our Lady of Good Counsel in Tirana, Albania, Sept. 21. Seated next to the pope is Cardinal Pietro Parolin, Vatican secretary of state, left, and Archbishop Angelo Massafra of Shkoder-Pult, Albania.(CNS photo/Paul Haring)

“We need each other,” he said, and the “more men and women are at the service of others, the greater their freedom.”

The pope said Albania was a “land of heroes” and a “land of martyrs,” whose people stood firm in the face of oppression and persecution.

It withstood centuries of Ottoman rule, followed by an independence that degenerated into decades of oppressive communist control. The totalitarian regime founded by Enver Hoxha claimed to liberate the people from the constraints of all religions, turning the country into the only atheist nation in the world.

“It promised a paradise without God, but it left instead a hell with no consolation,” Archbishop Rrok Mirdita of Tirana told the pope during a morning Mass in Mother Teresa Square.

Despite the risks of torture, imprisonment and execution, people held onto their faith, praying and passing on their traditions underground.

Hearing of such atrocities brought the pope to tears in one of the most moving moments of the one-day trip.

Father Simoni spent nearly 30 years in prison work camps, where he suffered continual physical and psychological torture because he refused to denounce the church.

When the atheist regime fell in 1991, the priest immediately went back to his ministry, urging feuding Christians in mountain villages to embrace God’s love and let go of hatred and revenge.

When the priest finished, he approached the pope, who extended his arms to embrace him. But the priest dropped to his knees to kiss the pope’s ring. Moved to tears as they embraced, the pope removed his glasses and paused a moment more as the two men rested their foreheads against each other.

The pope later put aside his prepared text, saying the intense courage and humility shown by the priest and other victims of the dictatorship showed that the only way to find the strength to survive such brutality was in God.

During a meeting with volunteers and children at the Bethany Center, a residence for disabled and poor children, the pope said faith through charity “dislodges the mountains of indifference, of disbelief, of apathy.”

Helping others is what “opens hands and hearts to what is good,” he said. 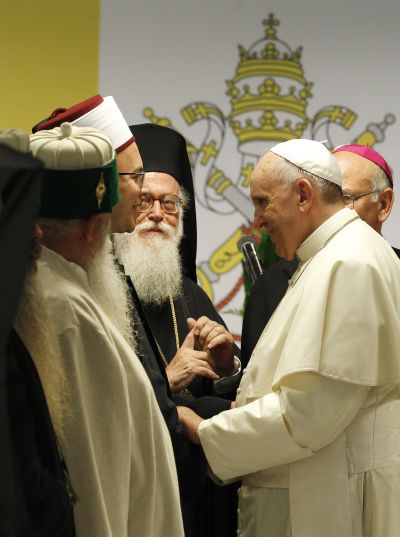 Pope Francis greets Skender Brucaj, head of Albania’s Muslim community, during a meeting with leaders of other religions at the Catholic University of Our Lady of Good Counsel in Tirana, Albania, Sept. 21. (CNS photo/Paul Haring)

“The secret to a good life is found in loving and giving oneself for love’s sake,” he said. “Goodness offers infinitely more than money, which only disappoints, because we have been created to receive the love of God and to offer it, not measuring everything in terms of money or power.”

Before praying the Angelus in Mother Teresa Square, the pope told young people to build their future on Christ, saying “‘No’ to the idolatry of money, ‘No’ to the false freedom of individualism, ‘No’ to addiction and to violence.”

He urged them instead to say, “‘Yes’ to a culture of encounter and of solidarity, ‘Yes’ to beauty,” the good and the true, and to a life lived with enthusiasm and “faithful in little things.”

Jurgen Lleshaj, a young man from the diocese of Rreshen, in northern Albania, told Catholic News Service that his faith gives him the courage to face an uncertain life because, “without God, there is nothing.”

“Our parents had to pray in secret, and we learned from them there is no life without Jesus,” said Lemida Zogu, a young woman with the Rreshen diocesan youth group.

Young people made up a large part of the jubilant crowds of some 300,000 who turned out to welcome the pope.

Many Muslims, who make up more than half the country’s population, were in attendance as well as large groups of Catholics, who make up about 15 percent of all inhabitants. Many took buses from other parts of Albania or walked from their homes in Tirana.

Security was typical for a foreign papal journey, with streets and rooftops dotted with police and the roads lined with metal barricades partitioning out the popemobile route.

All cellular service, however, was jammed by authorities for several hours as an extra precaution. The Vatican repeated earlier assurances that there were no “specific threats” against the pope, who rode around the main square twice before Mass in the same open-air jeep he uses at general audiences in Rome.

Before the start of the morning Mass, a large, powered paraglider circled and swooped over the main square, the fabric decorated with the national symbol of a black eagle.

The pope used the symbol in his homily, saying God raises his people “up on eagle’s wings.”

“The eagle soars up high, but it doesn’t forget its nest,” that is, its past, traditions and values, he said.

“Go up high, fly in the air,” while remembering the “great courage and constancy” of the church’s martyrs — bishops, priests, religious and laity who “paid for their fidelity with their lives,” he said.

“Don’t forget the nest, your history, the wounds, but do not seek revenge,” he said. “Go forward in hope.”

NEXT: Vatican astronomer: Just a matter of time until life found in universe