Survivors of Albania’s dictatorship give witness, move pope to tears 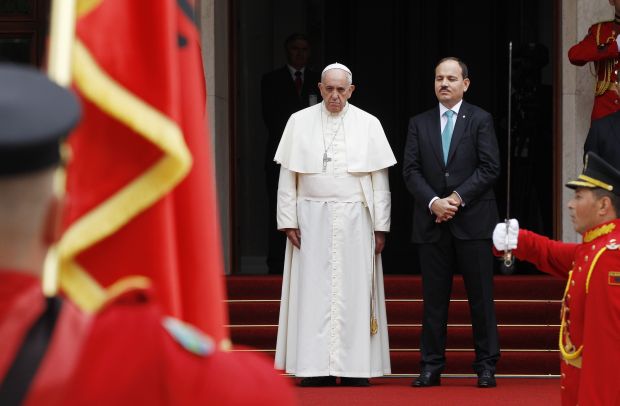 Pope Francis is welcomed by Albania's President Bujar Nishani at the presidential palace in Tirana, Albania, Sept. 21. The pope was making an 11-hour trip to Albania. (CNS photo/Paul Haring) 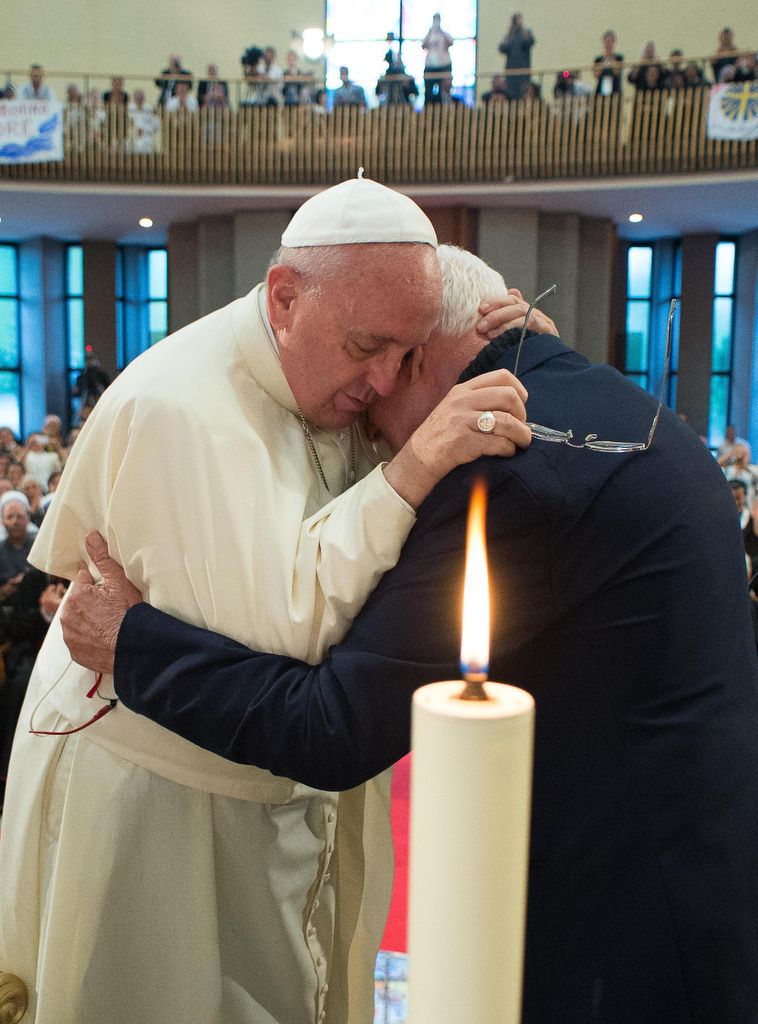 TIRANA, Albania (CNS) — Two survivors of Albania’s communist crackdown against the church brought Pope Francis to tears with their stories during a vespers service in Tirana’s cathedral Sept. 21.

“To hear a martyr talk about his own martyrdom is intense,” the pope told journalists on the papal plane back to Rome the same evening. “I think all of us there were moved, all of us.”

Franciscan Father Ernest Simoni, 84, talked about his life as a priest under a militant atheist regime that targeted people of every faith — Christian and Muslim — between 1944 and 1991. Despite the risks of torture, imprisonment and execution, people held onto their beliefs as best they could, praying and passing on their traditions underground.

Father Simoni said his religious superiors were shot dead and the military drafted him in an effort to “make me disappear. I spent two years there, years that were worse than any prison.”

He managed to be ordained a priest in 1956, on the feast of Divine Mercy. But the worse was yet to come when the regime, which was set to become the first atheist nation in the world, intensified its war against religion in the 1960s.

On Christmas Eve 1963, the priest was arrested while celebrating Mass and was sentenced to death by firing squad. He was beaten, placed for three months in solitary confinement under “inhumane” conditions, then tortured because he refused to denounce the church.

All the time he was imprisoned, he said, he celebrated Mass from memory in Latin, heard confessions and distributed Communion to other prisoners — all clandestinely. When the regime collapsed in 1991, he returned to ministry by serving isolated mountain villages, urging Christians caught up in a cycle of revenge to let go of their hatred and embrace God’s love.

When the priest finished his testimony, he approached the pope, who extended his arms to embrace him. But the priest dropped to his knees to kiss the pope’s ring. Standing together, the two men embraced warmly. Moved to tears, the pope removed his glasses and the men briefly rested their foreheads against each other.

Stigmatine Sister Marije Kaleta, 85, spoke next about being a novice during the regime and secretly baptizing “everyone who came to my door,” but only after making sure they weren’t spies who wanted to turn her in to authorities.

One day, while walking along a road, a mother carrying her child ran up to her, asking her to baptize the infant.

Sister Kaleta was hesitant because the woman’s husband was a communist and she worried it might be a trap. So she told the mother it wasn’t possible because she didn’t have the things necessary for baptism.

The mother appeared desperate, and even though they were in the middle of a road, she pointed to a nearby ditch saying that’s where they could get the water.

Still unsure, the sister said she had nothing with which to pour the water over the child’s head.

“But she insisted that I baptize her child. So, seeing her faith, I took off my shoe, since it was made of plastic, and I took the water from the canal with that and baptized the child,” she said.

Thanks to a number of priests who also worked clandestinely, “I had the good fortune of having the Blessed Sacrament,” which she kept hidden in bed sheets to secretly administer to people who were ill or dying.

The pope said he had had no idea how much the people of Albania had suffered for their faith, until two months earlier when he started preparing for his trip.

He said he was moved to see Tirana’s main boulevard lined with banners bearing black-and-white photographs of dozens of Catholics killed by the regime. Their cause for canonization as martyrs of the faith is being considered.

Pope Francis called Albania a land of heroes and martyrs and said that, by embracing the priest and sister, he had “touched two of them.”

The pope said Father Simoni and Sister Kaleta “performed a service for us: consoling us” by showing that God always provides the strength and hope to confront and overcome the tiniest inconveniences and the worst atrocities.