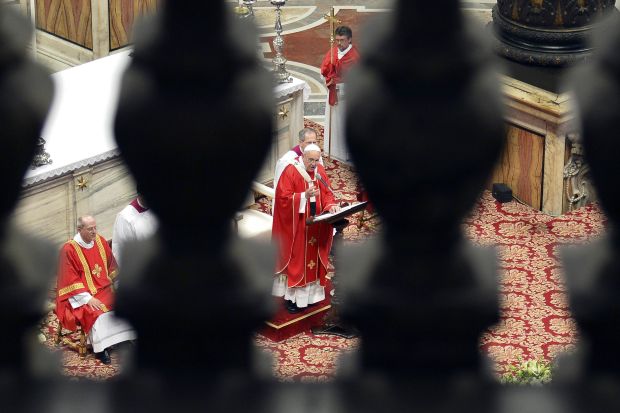 Pope Francis speaks during the wedding of 20 couples in St.Peter's Basilica at the Vatican Sept. 14. The Vatican announced the formation of a special commission to reform the process of granting marriage annulments. (CNS photo/ Alberto Pizzoli, Reuters)

VATICAN CITY (CNS) — Two weeks before the start of an extraordinary Synod of Bishops on the family, the Vatican announced the formation of a special commission to reform the process of granting marriage annulments.

“The work of the commission will start as soon as possible and will have as its goal to prepare a proposal of reform of the matrimonial process, with the objective of simplifying its procedure, making it more streamlined, and safeguarding the principle of the indissolubility of matrimony,” said a Vatican statement Sept. 20.

The new body’s work will address what Pope Francis has identified as a key challenge in the “pastoral care of marriage.”

“There is the legal problem of marriage nullity, this has to be reviewed, because ecclesiastical tribunals are not sufficient for this,” the pope told reporters in July 2013.

Pope Francis related the problem of annulments to the situation of divorced and civilly remarried Catholics, whose predicament he said exemplifies a general need for mercy in the church today.

According to church teaching, such Catholics may not receive Communion unless they obtain an annulment of their first, sacramental, marriage or abstain from sexual relations, living with their new partners as “brother and sister.”

A proposal to allow some divorced and civilly remarried Catholics to receive Communion without meeting either of those conditions, introduced by German Cardinal Walter Kasper at a meeting of the world’s cardinals in February, is expected to be one of the most discussed issues at the two-week synod on the family, which opens Oct. 5.

The new commission on the annulment process, which Pope Francis established Aug. 27, has 11 members, including Cardinal Francesco Coccopalmerio, president of the Pontifical Council for Legislative Texts, and Archbishop Luis Ladaria Ferrer, secretary of the Congregation for the Doctrine of the Faith.

PREVIOUS: Vatican astronomer: Just a matter of time until life found in universe

NEXT: Survivors of Albania’s dictatorship give witness, move pope to tears