U.S. bishops plan to be stronger advocates for Israeli-Palestinian peace 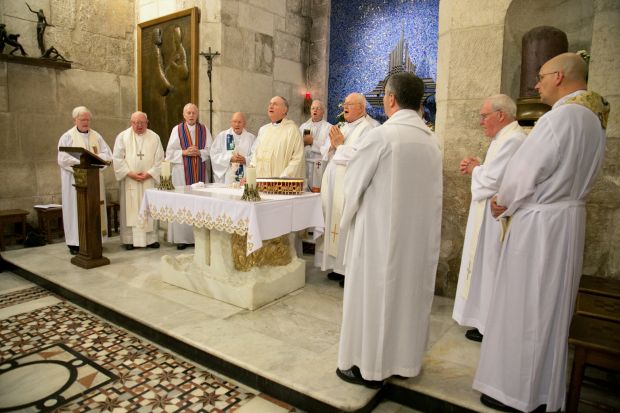 Bishop Richard E. Pates of Des Moines, Iowa, and other U.S. bishops celebrate Mass in Jerusalem's Church of the Holy Sepulcher Sept. 11. Bishop Malone was one of 18 bishops on a nine-day prayer pilgrimage for peace in the Holy Land. (CNS photo/Jen Hardy, CRS)

JERUSALEM (CNS) — American bishops were returning to their dioceses after a nine-day pilgrimage to the Holy Land with a stronger resolve to advocate for peace and to urge the U.S. government to take a leadership role in ushering Israelis and Palestinians toward peace, a member of the delegation said.

“Framed by Pope Francis’ encouragement of encounters in Christ with the poor and suffering, (we have encountered) in the Holy Land Palestinians and Israelis who live sometimes with fear, sometimes with hate,” Bishop Oscar Cantu of Las Cruces, New Mexico, told Catholic News Service Sept. 18.

“In Gaza, we have witnessed the destruction, death and loss of family. We feel an urgent need to bring attention to this,” he said.

Representing the U.S. Conference of Catholic bishops, the clerics met with Israeli and Palestinian religious and political leaders, spent time meeting local residents and prayed at holy sites during the pilgrimage that began Sept. 11. Bishop Cantu was among five bishops who also visited Gaza a month after the recent 50-day Gaza war ended.

Bishop Edward J. Weisenburger, of Salina, Kansas, who had served as a chaplain in Oklahoma City after the 1995 bombing of a federal building there, said he had never expected to see such destruction and suffering again.

He described what he saw in Gaza as “painful to see.”

Electrical service remained sporadic and school was suspended while children healed from the trauma.

“All this makes us realize that there is no price too high to pay for peace,” Bishop Weisenburger told CNS. “(We need) the international community to coalesce to help both parties to come together for the sake of justice for both sides who have known suffering. Both sides have the right to have stability and peace.”

Just a few short years ago, the bishop noted, he had thought there would never be peace in Northern Ireland, but now peace has come.

“Hope makes it possible to envision a new future,” he said.

Bishop Bernard J. Harrington of Winona, Minnesota, said he was struck by the difficult situation in East Jerusalem in terms of building restrictions and lack of freedom of movement for residents.

“We met some wonderful Israelis who are truly interested in peace and also some who talk about peace but say there are too many restrictions, namely the issue of security,” he said of some Israeli leaders.

Bishop Richard J. Malone of Buffalo, New York, noted the intensity of the experience, and admitted that he was returning home with a greater sense of the situation’s complexity because of its parallel narratives.

“I am going to have a lot more learning and thinking and praying to do,” he said. “People on both sides need to open their ears to the other side, especially the ears of their hearts.”

While calling for the removal of the Israeli separation barrier, which he said serves only as a sign of exclusion, retired Bishop Michael D. Pfeifer of San Angelo, Texas, said the warm relations shared by Christian and Muslim students in Catholic schools was inspiring. He suggested their cooperation could serve as a model for further grass-roots encounters between Israelis and Palestinians.

“I think promoting (encounters) like this could promote change on the grass-roots level while we do work on the higher levels within the USBCC,” he said. “I think youth can bring about change.”