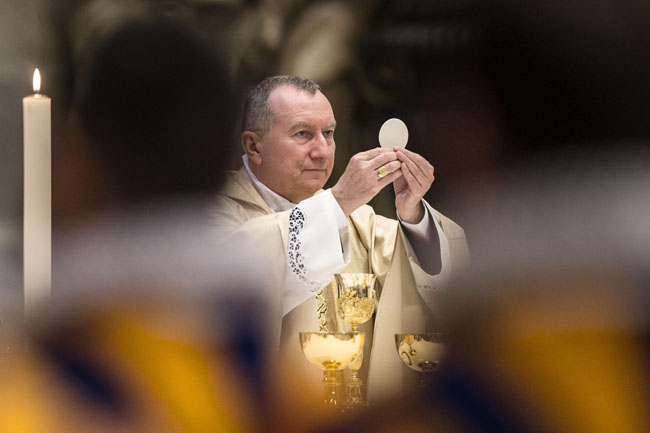 Cardinal Pietro Parolin, the Vatican's secretary of state, celebrates Mass at St. Peter's Basilica at the Vatican May 6. In an address Sept. 23 to the U.N. Climate Summit, the cardinal talked about a sense of "shared responsibility to protect our planet and the human family" must influence how nations react to the reality of climate change. (CNS photo/Angelo Carconi, EPA)

UNITED NATIONS (CNS) — A sense of “shared responsibility to protect our planet and the human family” must influence how nations react to the reality of climate change, the Vatican’s secretary of state told the United Nations Sept. 23.

In a statement during the U.N. Climate Summit, Cardinal Pietro Parolin observed that “warming of the climate system is unequivocal. It is a very serious problem which … has grave consequences for the most vulnerable sectors of society and, clearly, for future generations.”

He noted that from the beginning of his pontificate, Pope Francis has emphasized the importance of protecting the environment, “which all too often, instead of using for the good, we exploit greedily, to one another’s detriment,” Cardinal Parolin said, quoting the pope’s March 2013 address to the diplomatic corps accredited to the Holy See.

Prudence must prevail in the face of the risks and costs of the increase of greenhouse gases caused by human activity, said Cardinal Parolin said. This requires political and economic commitments by the nations of the world, including the Holy See, he added.

He again quoted Pope Francis, from a general audience in May, when he said a risk lies in the “considering ourselves the masters of creation. Creation is not some possession that we can lord over for our own pleasure, nor, even less, is it the property of only some people, the few. Creation is a gift, it is the marvelous gift that God has given us so that we will take care of it and harness it for the benefit of all, always with great respect and gratitude.”

Cardinal Parolin said that over the decades since the U.N. Framework Convention on Climate Change in 1992, there has been increasing awareness that the entire international community is interdependent. “There is no room for the globalization of indifference, the economy of exclusion or the throwaway culture so often denounced by Pope Francis,” he said.

A collective response, “based on a culture of solidarity, encounter and dialogue,” should be the basis of interactions of every family, including the human family, he said.

“States have a common responsibility to protect the world climate by means of mitigation and adaptation measures, as well as by sharing technologies and ‘know-how,'” said the cardinal.

He warned that market forces alone, “especially when deprived of a suitable ethical direction,” cannot resolve the interdependent crisis of global warming, poverty and exclusion.

Ethical motivations behind complex political decisions, such as those required to address climate change, must be clear, said the cardinal. “Within this perspective, an authentic cultural shift is needed which reinforces our formative and educational efforts, above all in favor of the young, towards assuming a sense of responsibility for creation and integral human development of all people, present and future.

He noted that the Vatican City State, “though small, is undertaking significant efforts to reduce its consumption of fossil fuels through diversification and energy efficiency. He added that the Holy See’s delegation to the U.N.’s climate change conference in Warsaw, Poland, last November said that “talking about emission reductions is useless if we are not ready to change our lifestyle and the current dominant models of consumption and production.”

Cardinal Parolin said the Holy See and other Catholic entities are committed to environmental responsibility, “in the conviction that the deterioration of nature is directly linked to the culture which shapes human coexistence. Respect for environmental ecology is a condition of, and conditioned by, respect for human ecology in society.”

NEXT: Vatican media need to ‘up their game,’ says adviser