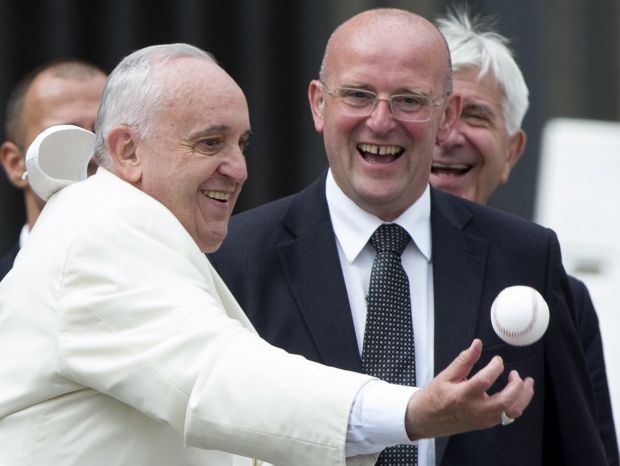 Pope Francis reaches out to grab a baseball thrown by someone in the crowd as he leaves his general audience in St. Peter's Square at the Vatican Sept. 24. The pope gave a sign it was okay for the ball to be thrown, then leapt and almost caught a slightly high throw. The ball was picked up by Domenico Giani, the pope's lead bodyguard, center. The pope signed the ball, which according to a YouTube video (see link below) was thrown by a member of the Koeppel family from St. Edward's Church in Palm Beach, Fla., in the hope of raising money for their parish. (CNS photo/Claudio Peri, EPA)

VATICAN CITY (CNS) — As fleeting as soap bubbles, showy as peacocks and shallow as an over-primped star, conceited Christians are building their lives on lies and their faith on shifting sands, Pope Francis said.

Everyone is vulnerable to vanity, even Christians, the pope said in a morning homily Sept. 25.

However, boastfulness “is a very serious spiritual disease” for Christians because it distances them from the truth. Christians are called to “be authentic with the truth of reality and of the Gospel,” he said in remarks reported by Vatican Radio.

The pope’s homily focused on the day’s reading from the Book of Ecclesiastes, which speaks about the “vanity of vanities! All things are vanity!” (Eccl 1:2-11).

Even when living out the faith and doing good, Christians must avoid the temptation of “showing off,” he said during an early morning Mass in the chapel of his residence, the Domus Sanctae Marthae.

“The vain say, ‘Hey, look, I’m giving this check for the church’s work,’ and they show off the check; then they scam the church from behind,” he said.

There are others who “seem like peacocks,” strutting around bragging: “‘I’m related to that priest, that sister, that bishop, my family is a Christian family.'”

Jesus was especially critical, he said, of “doctors of the law,” who were “strolling in the square” with “luxurious clothes” like princes.

“How many Christians live off of appearances! Their lives are like a soap bubble. A soap bubble is beautiful! It has so many colors! But it lasts one second and then what?”

People can even be vain about death, with their grandiose, ornate funeral monuments and tombs, he said. “The truth is we return to the bare earth.”

The pope said vanity is based on lies and fantasy, which cause “terrible anxiety.”

“It’s like those people who put on too much makeup and then they’re afraid of getting rained on and all the makeup running down their face.”

“Only truth gives us peace,” he said.

People need to reflect on how they pray, fast, give alms and help those in need, he said.

It should be done quietly and discreetly.

“No need to blow the horn,” he said, “The Father sees it and that’s enough.”

Jesus wants people to build their lives on rock — on Christ and the truth, not on sand that shifts and slides and is “incapable of resisting temptation.”

If “you don’t have something solid” guiding and anchoring your life, “you will come and go, too,” like all material things, he said.

NEXT: Vatican official calls for shared responsibility in protecting planet