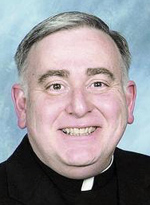 The Archdiocese of Philadelphia called the charges “serious and disturbing” in a statement Oct. 24. It said Father Haynes has been placed on administrative leave immediately and he no longer resides at SS. Simon and Jude rectory.

The statement said no allegations of sexual abuse of a minor have ever been lodged against the priest, and there were no prior indications he was involved with child pornography.

“The archdiocese is cooperating fully with law enforcement regarding this matter and remains fervently committed to preventing child abuse as well as protecting the children and young people entrusted to its care,” the statement read. “Child pornography is a scourge that must be eradicated.”

While on administrative leave, Father Haynes is not permitted to exercise public ministry, administer any of the sacraments, or present himself publicly as a priest.

He remains in Chester County Prison after failing to post 10 percent of bail set at $200,000.

Hogan added the investigation in the case is ongoing, and the archdiocese and SS. Simon and Jude Parish are cooperating fully in it.

“Given the number of parishes to which the defendant was assigned and his close proximity to children, we are concerned that other victims are out there'” Hogan said. “Anybody with information should come forward immediately.”