Because of Ebola crisis, people ‘can’t even go to church,’ says priest 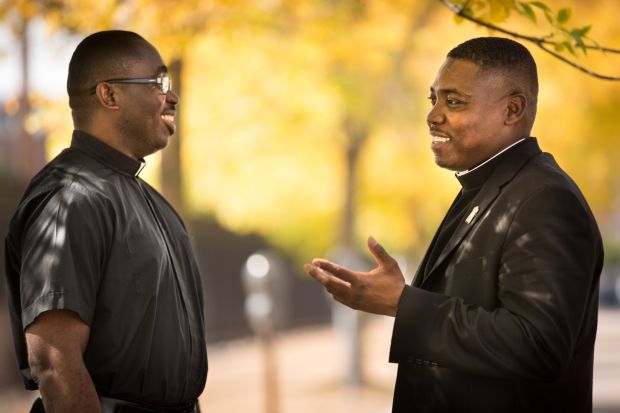 ST. LOUIS (CNS) — Father McDonald Nah is praying that the people of Liberia are just as resilient with the Ebola outbreak as they were following the country’s civil war more than a decade ago.

Father Nah is a priest of the Archdiocese of Monrovia, Liberia, who is currently studying Catholic education administration at St. Louis University. The priest, who resides at a downtown parish, St. Nicholas, with another Liberian priest, Father Urey Patrick Mark, is expected to return to Liberia next summer after he completes his studies.

Father Nah said that people in Liberia have been isolated because of the severity of the virus, especially those who have been in close proximity to someone who has died from the illness.

People “can’t even go to church,” he told the St. Louis Review, newspaper of the St. Louis Archdiocese. “Usually in Liberia, when someone is sick … they go around to visit with the sick. But they can’t visit them at all. It has created something they have never seen before. I was in Liberia during the war, and apart from people dying, we could visit. You could go places. But with this situation, you can’t at all.”

A priest for 11 years, Father Nah has served in two Liberian parishes, Sacred Heart Cathedral in Monrovia and St. Peter Claver Church. The people of those communities have become like family to him. He personally knows 16 people who have died from the Ebola virus.

“It’s been tough to be away from them,” he said, adding that he keeps in touch with people back home through texting and social media. “You feel there’s … nothing physically you can do to actually be of help to them.”

Earlier this year, Father Mark, a member of the Society of the Divine Word, was asked by his community to serve on a new mission team in the Diocese of Cape Palmas, Liberia. However, plans have been put on hold as the situation evolves. He is expected to head to the Divine Word motherhouse in Techny, Illinois, in November.

“The whole timing with the new mission and the Ebola situation has created a serious panic in the subregion,” said Father Mark, who recently learned that his uncle died from the illness. In a recent conversation with his superiors, Father Mark said he likely won’t go to Liberia until the first quarter of next year, “or whenever it’s safe to enter.”

Seeing the images of people in Liberia being sprayed with chlorine disinfectant after they handled the bodies of those killed by Ebola “shows the dehumanizing face of the virus,” Father Mark said. “Families cannot care for one another because of the virus.”

Traditionally, families prepare a loved one’s body for burial themselves, but the government has mandated that all bodies be cremated.

Father Mark, who started a collection of supplies to be sent to the church in Liberia, said he’s thankful for the U.S. government and others who have stepped in to help “restore humanity” in his country.

To date the U.S. government has committed more than $175 million toward the effort to thwart the Ebola epidemic. The U.S. recently announced it will deploy 3,000 troops to help transport medical equipment, supplies and personnel.

Catholic Relief Services, the U.S. bishops’ overseas relief and development agency, has increased its support in affected countries and has allocated more than $376,000 toward efforts such as training volunteers and religious leaders, providing hygiene kits and making household visits in Guinea, Liberia, Sierra Leone and Ghana.

Brinker is a staff writer for the St. Louis Review and Catholic St. Louis, the newspaper and magazine, respectively, of the St. Louis Archdiocese.