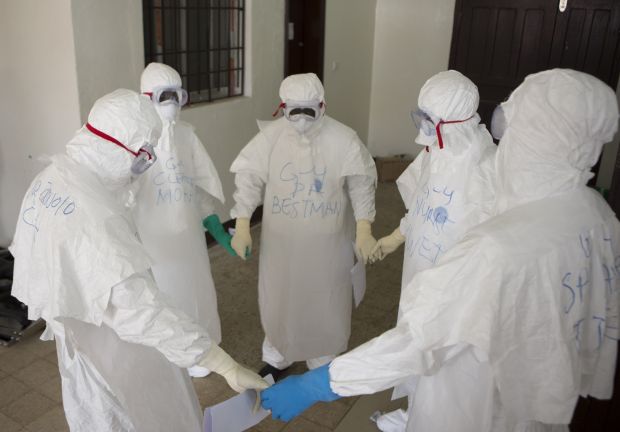 Health workers wearing protective equipment hold hands as they pray at the start of their shift before entering the Ebola treatment center in Monrovia, Liberia, Sept.30. (CNS photo/Christopher Black, WHO, Handout via Reuters)

ST. LOUIS (CNS) — When Joe Sehnert moved to Liberia in 2011, he knew the risks of going to a Third World country.

Ebola wasn’t among them; the deadly virus historically has been limited to countries in East and Central Africa.

But as part of a recent outbreak, the disease has ravaged Liberia and other West African countries, including Guinea, Nigeria, Senegal and Sierra Leone. The World Health Organization and U.S. Centers for Disease Control and Prevention report more than 6,500 cases and more than 3,000 deaths since the outbreak began. WHO has categorized this as the largest Ebola breakout in history; it’s the first in West Africa.

Sehnert, a member of Ascension Parish in Chesterfield for more than 30 years, is in the village of BlackTom, about an hour away from the capital of Monrovia. He is director of the Liberia Mission, an effort of Franciscan Works.

The Catholic organization started its Liberian mission in 2003 to provide education and residential support to children left orphaned as a result of the country’s civil war that ended the same year.

On a 25-acre compound, the mission includes a farm, school and parish — St. Michael the Archangel. More than 300 children from nearby villages attend St. Anthony School, which includes kindergarten through ninth grade. Of those 300 students, 110 orphan students, called beneficiaries, reside at the mission.

About 45 students living at the mission were in the midst of a summer work program at the beginning of August when the Liberian government declared a state of emergency and told everyone to stay put.

“We weren’t sure how we were going to handle it,” Sehnert said in a phone interview with the St. Louis Review, newspaper of the St. Louis Archdiocese. Students earn about $100 (U.S.) in the monthlong work program, which helps pay for uniforms and other needs.

In mid-September, the mission learned that one of its students, 17-year-old Johnson Moore died from the virus. He and two classmates were home for the summer with Johnson’s mother in Monrovia when he died. Sehnert said the mission was devastated to hear the news.

“He was a very intelligent guy, one of the smartest kids in our school,” he said. “He was as excellent on the football field as he was in the classroom. He loved to sing and was always belting it out around the campus.”

The virus otherwise hasn’t made it to the mission’s campus, but it has come close.

“About two to three miles from here on the other side of the university, there’s a small village with 11 people who have it,” Sehnert said. “Five miles down the road, there are about 10 to 12 people who have died. We’re kind of lucky because we’re rural and we don’t get a lot of contact with the outside too much.”

Many of the villages near BlackTom are surrounded by rubber plantations and other land used for farming. Monrovia has no running water, no sewer system or electrical grid. “And the war has been over for 10 years,” he said.

Sehnert said those working at the mission know many people who have died, including one family who lost nine of their 11 children. They also were friends with medical staffers — including a Spanish priest, a woman religious from Congo and a religious brother from Nigeria — from St. Joseph’s Catholic Hospital in Monrovia.

“They used to come up here on Saturdays and buy their meat from us,” he said. “They helped (the kids) with appendix operations. You go in one of these clinics and literally will sit there waiting three, four, 10 hours just to get a tooth pulled. The sister would always make sure these kids got in right away. But now they’re all gone. The hospital is closed.”

Several weeks ago, representatives from St. Michael the Archangel met with other churches for a presentation on how to talk to people about the disease and precautions they can take.

“We ask everybody who comes into the compound to wash their hands with bleach water and to stay away from the kids,” Sehnert said. “We did a semi-quarantine ourselves. I had to go out and buy food today so that we can make (meals), but we have also stockpiled food.”

The price of food and other necessities has skyrocketed as a result of the outbreak. Much of the country’s grain, which comes from the northern counties of Liberia and across the border in Guinea — the general area in which the outbreak is reported to have started — is becoming harder to access. The government has a mandate that regulates prices, but it simply isn’t possible because of the turmoil.

Sehnert was to end his tenure at Liberia Mission in June, but he was asked to stick around and help with a transition at the school. “Little did I know this was going to happen,” he said.

After he retired in 2006 as a corporate executive, he went to work with the Jesuits on the Colville Indian Reservation in eastern Washington state, and then found out about the opportunity in Liberia.

The poverty in Liberia is “unlike anything in the United States, but they’re happy people,” Sehnert said. Per capita income is about $500 a year.

He added, “We’re keeping the school open and making sure they have a solid Catholic education. This is their only way out. God, education and work is our motto. It’s a good motto for me.”

Brinker is a staff writer for the St. Louis Review and Catholic St. Louis, the newspaper and magazine, respectively, of the St. Louis Archdiocese.

NEXT: Because of Ebola crisis, people ‘can’t even go to church,’ says priest