Biloxi’s retired bishop has been eyewitness to racial division, healing 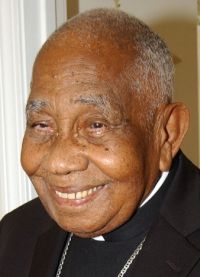 BILOXI, Mass. (CNS) — The harsh realities of racial segregation were spelled out for Bishop Joseph Lawson Howze at an early age.

The bishop recently shared some recollections of growing up in the segregated South and how racial healing was gradually brought about through the 1964 Civil Rights Act.

“I think I was about 9 years old when the Depression came on,” he said. “I remember that there was very strong segregation in Alabama, especially in Baldwin County. We went to public schools and the schools for the black kids were closed in March so they could work in the potato fields. The other schools were not closed. So that shows you the difference between the races during that particular time. Segregation was pronounced.”

However, Bishop Howze said his family was fortunate in that they were never the targets of serious racial backlash.

“My grandfather was a mulatto. He was half white. When the census was taken in 1930, my brother and I were listed as mulatto kids,” said Bishop Howze. “I didn’t realize it as a kid growing up, but I’m quite sure he got some privileges because of that. He was also a very strong man. He was a deacon in the Baptist church and I’m sure that, sometimes, he got a lot of things because of who he was.”

Nevertheless, Bishop Howze said that, as a young boy, he wondered about different aspects of racial segregation.

“I wondered why, when we got on a public bus, we had to sit in the back with a curtain drawn in front of us and things like that,” he told the Gulf Pine Catholic, newspaper of the Diocese of Biloxi. “But there was no racial violence directed toward me and my family when I was growing up.”

A cradle Baptist, Bishop Howze attended Most Pure Heart of Mary School in Mobile, Alabama, as a child, and became a Catholic at age 25 under the instruction of Josephite Father Benjamin Horton.

He met the priest through the family of a student who was in his homeroom. Bishop Howze taught high school chemistry and biology in Mobile’s public schools and also was assigned a homeroom.

The student, Marion Louis Carroll, was a Catholic. The youth’s parents invited him to dinner one evening and he met Father Horton.

Bishop Howze was baptized at Most Pure Heart of Mary Church in Mobile Dec. 4, 1948, and made his first Communion the next day at Our Mother of Mercy Mission Church.

Father Horton soon transferred and was replaced by Josephite Father Vincent Warren, who was “a very missionary-minded priest,” said Bishop Howze. “After my baptism, I used to travel with him to his mission churches. At the time, I was playing the organ and piano a little bit and would do the music for him. It was he who really inspired me to become a priest.”

While waiting to be accepted by a diocese as a seminarian, Bishop Howze spent a year teaching at St. Monica Catholic School in Tulsa, Oklahoma.

Bishop Vincent S. Waters of Raleigh, North Carolina, “adopted” him, he said, sent him to the diocesan preparatory seminary in Buffalo, New York.

After graduation, Bishop Howze was admitted to Christ the King Seminary at St. Bonaventure in New York, where he was the lone black seminarian but experienced no racial prejudice. He received his doctor of divinity degree in 1959 and was ordained for the Diocese of Raleigh that same year.

Bishop Howze served in several black parishes throughout North Carolina before being appointed pastor of the Basilica of St. Lawrence, a predominantly white parish in Asheville, in 1968.

“There was a period of adjustment,” he recalled, “but I got to know everybody and was loved by the people.”

However, he wasn’t immune to the indignity of racial segregation.

He described a meeting the Raleigh bishop had with priests at a Holiday Inn and the management of the hotel “made it known that they weren’t going to serve me at the dinner. So, the bishop and the entire group of priests left. It was terrible.”

In 1972, he was appointed auxiliary bishop of Natchez-Jackson, Mississippi. “I was scared to come here and wondered why I was being sent to this place where there was all this terrible racial segregation,” he said.

“But my bishop, Bishop Michael Begley, told me, ‘Almighty God is appointing you to go and serve the church in Mississippi and you do that. You’ll be OK.’ So I did and I was ordained a bishop 44 years ago.”

At the same time as Bishop Howze’s episcopal ordination at the Jackson Civic Center, a kneel-in supporting church desegregation was taking place down the street at the predominantly white First Baptist Church.

“Could you imagine I went up there by myself? I didn’t have a driver. Cardinal Bernard Law was still in the diocese then as a young priest, but he didn’t go with me,” he said. “The Trinitarians were in charge of the parish in Philadelphia at the time. I was a little concerned about it, but everything went well. The confirmation class had black kids, white kids and Indian kids. I had no problems. It was an historic day.”

Bishop Howze’s appointment was a watershed moment for African-American Catholics. Then-Bishop Joseph Brunini of Natchez-Jackson “was looking for a black bishop to come here,” he recalled. “That’s the reason why I was named here.

As far as the changes that came about as result of the implementation of the Civil Rights Act, Bishop Howze found them to be “drastically wonderful.”

“Right now, there are more black mayors in Mississippi than any other city in the country and, of course, last year a black guy ran for governor and did well,” said Bishop Howze.

Although he supported the cause, Bishop Howze was never directly involved in any of the pivotal events of the Civil Rights movement, primarily because the bishops discouraged clergy and sisters from getting involved, and partly because he had lingering foot problems that prevented him from participating in marches.

“The change in Mississippi was phenomenal really, and I think the reason was because the direct relationship between whites and blacks in the South was good,” Bishop Howze said. “I lived in a community in Mobile growing up with both whites and blacks living in the community. But racial segregation was still there.

He added, “Now I’m not saying that integration was easy in Mississippi. It wasn’t because the white kids left and went to private schools. So the public schools became predominately black schools. Then, effective changes were made. And I will say this. I have seen dramatic changes in race relations in Mississippi.”

Dickson is editor of the Gulf Pine Catholic, newspaper of the Diocese of Biloxi.

PREVIOUS: Christians must treat others with gentleness, love, says priest

NEXT: Alaska to appeal ruling that invalidates its ban on same-sex marriage