Christians must treat others with gentleness, love, says priest 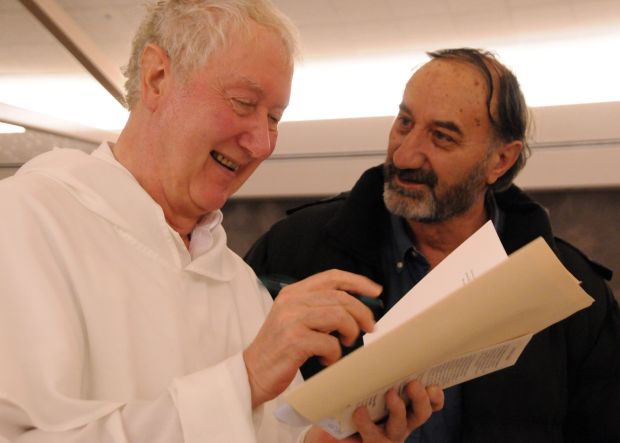 SALT LAKE CITY (CNS) — Scripture, sexual ethics, and a healthy dose of wit and personal stories helped Dominican Father Timothy Radcliffe convey that people are a combination of body, soul and spirit during an Oct. 10 presentation in Salt Lake City.

London-based Father Radcliffe, a well-known author and lecturer who led the international Dominican order from 1992 to 2001 and wrote the 2005 book “What Is the Point of Being A Christian?” stressed that Christians are the hands, feet, ears, face and touch of Christ.

“Christianity is a profoundly bodily religion,” although modern society is very ambiguous about bodies, presenting both the “cult of the body beautiful” but also embracing Descartes’ idea of ‘I think, therefore I am,’ “as if we were really minds, and so our bodies are unimportant,” he added.

By contrast, St. Thomas Aquinas defined man as one substance, body and soul.

“I think we discover most beautifully what it is to be a body at the Last Supper, when Jesus takes the bread and he breaks it and he says, ‘This is my body, given for you,'” Father Radcliffe said.

Married couples give their bodies to each other “with the generosity, the fidelity and the vulnerability of Jesus,” he said, adding that similarly, parents caring for children, adult children caring for aging parents, doctors and nurses caring for the ill — all give away their physical strength and make a gift of themselves.

Bodily senses are important, he added, pointing out many biblical stories that begin with listening: God calls Abraham out of his homeland, he calls Moses from the burning bush and Samuel in the temple.

Sight also figures prominently in biblical imagery. Jesus sees Nathaniel under the fig tree; he recognizes that Levi is a good man despite being a tax collector and he notices the widow putting her mite into the treasury.

“Nobody else would have seen her,” Father Radcliffe said. “The beginning of all Christian ministry, a proclamation of the Gospel by every one of us, is learning how to look at people with tenderness, with gentleness, with love. Unless you do that, all our preaching the Gospel is an entire waste of time.”

The priest also pointed out so much of the ministry of Jesus was about touch. “He touches lepers. He touches the sick. He touches people you weren’t supposed to touch.”

He also recounted his own recent experiences where he said he saw the face of God in strangers.

Early this year, he was in Algeria with Bishop Jean-Paul Vesco of Oran, Algeria, when fighting broke out on the road and they were forced to stop. As angry people began to surround the car, the priest saw a young man getting ready to throw a large rock at the windshield.

“His face was contorted with hatred, and I thought, ‘If I can engage his eyes, he might remember that I am a human being too.’ … But beneath all the hatred you could see fear.”

Bishop Vesco saw a break in the hostile crowd and was able to speed off. “Always have a bishop as your driver,” the priest said.

The two drove off and later that day at an oasis they asked some other men about road conditions. The men said their car wouldn’t handle the road, but they went on anyway. When the road became too rough, they stopped and found that the men from the oasis had followed them and offered them lodging for the night, a kindness that Father Radcliffe recalls gratefully.

“It was as if, in these three young Muslims, I saw the face of God. I’ll never forget their faces,” he said.

NEXT: Biloxi’s retired bishop has been eyewitness to racial division, healing