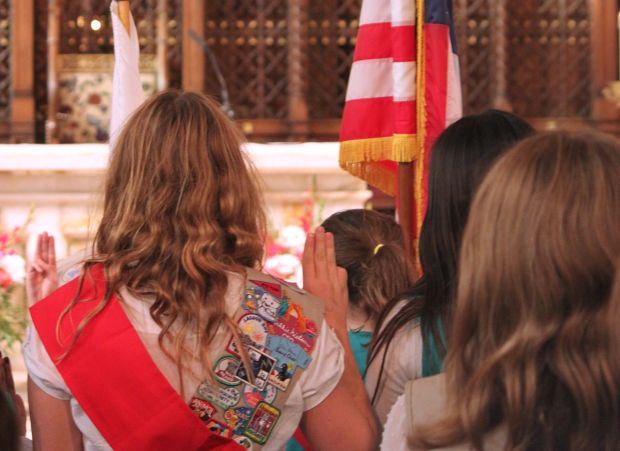 A Girl Scout from Utah recites the Girl Scout promise prior to Mass at the Cathedral of the Madeleine in Salt Lake City Oct. 18. (CNS photo/Erick Rommel)

SALT LAKE CITY (CNS) — One hundred years ago, Cardinal James Gibbons of Baltimore endorsed the work of the Girl Scouts and their relationship with the Catholic Church.

That relationship remains vibrant today as evidenced by the participation of the National Federation of Catholic Youth Ministry in the 2014 national convention of the Girls Scouts of the USA, held Oct. 14-18 in Salt Lake City.

There are an estimated 400,000 Catholic girls among the nation’s 3 million Girl Scouts.

Robert McCarty, the federation’s executive director, noted that the Girl Scouts as an organization was one of the foundation’s earliest members.

“Girl Scouting is such an integral part of what we do in Catholic youth ministry across the country,” McCarty said during an Oct. 17 breakfast hosted by the Washington-based federation.

The Catholic organization provides resources, networking and training for the development of youth ministry, and “we think of Girl Scout leaders as essentially youth leaders in a different setting,” he said.

McCarty noted that misinformation about Girl Scouts and Planned Parenthood caused difficulties for some Catholics. He met with Girl Scout leaders on several occasions about Catholic concerns brought to the federation’s attention.

The aim of the resource, issued last April by the bishops’ Committee on Laity, Marriage, Family Life and Youth, was not to support or oppose Catholic involvement with Girl Scouts of the USA, known as GSUSA, but to provide local bishops, pastors, youth leaders and parents with necessary information to determine their level of involvement.

GSUSA’s position is that “no monies collected by Girl Scouts for any purpose, including our girls’ cookie sales, will be given to Planned Parenthood or any other organization” that advocates on issues such as abortion and contraception.

There are four Catholic religious recognition programs the organization offers to Girl Scouts and they are geared specifically to grade levels. In addition, there are two Girl Scout medals that recognize adults who “model the highest ideals for young people.”

Girl Scouting “provides a framework and a structure where a girl can integrate her faith while she’s growing and developing, so in terms of character development, through the recognition programs, you can increase their faith,” said Kathleen Carver, associate director of the National Federation of Catholic Youth Ministry.

The “Family of God” and “I Live My Faith” programs, which are for the younger girls, “are done more in the homes with the parents, and so it’s also a way of reaching parents and helping them take on their role as educators of their children in the faith,” Carver pointed out.

In Scouting, girls learn to discover, connect and then take action, which is the most important piece because “you’re engaging with your community to do something to make the world a better place,” Flanagan said. “I think that those three keys to leadership marry perfectly with the church and it enhances both; it enhances the Girl Scout experience and it enhances the faith.”

Among those who attended the breakfast were two of GSUSA’s National Young Women of Distinction, the highest honor in the organization: Catherine Riordan, from Ohio, and Laura Robert Rivera, from Puerto Rico. Both young women said the networking opportunities at the national convention were helping them further the reach of their Gold Award projects, which are meant to make the world a better place.

“I’ve met so many inspiring women … who have really motivated me to keep on moving with my project and taking it elsewhere,” Rivera said.

Mischel is the editor of the Intermountain Catholic, newspaper of the Diocese of Salt Lake City.