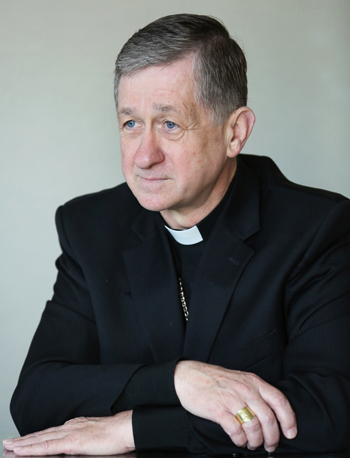 Archbishop Blase J. Cupich, who was appointed Sept. 20 to head the Chicago Archdiocese, pauses during an interview in Washington Oct. 6. (CNS photo/Bob Roller)

CHICAGO (CNS) — Archbishop Blase J. Cupich, who will succeed Chicago Cardinal Francis E. George in mid-November, told the priests of the Archdiocese of Chicago that he has decided he will live in the rectory at Holy Name Cathedral.
He said Oct. 22 that he made the decision in consultation with Cardinal George, Msgr. Dan Mayall, who is the cathedral’s pastor, and several Chicago priests.

The rectory is the former residence of retired Auxiliary Bishop Timothy J. Lyne, who died in 2013 at age 94. The living quarters are named for the late bishop.

Archbishop Cupich said that among other considerations, he wanted to live in a place where he can be most effective in serving all the people in the Archdiocese of Chicago. When his schedule permits, the archbishop intends to celebrate daily Mass at the cathedral. The location also provides easy access to his office at Archbishop Quigley Center.

In deciding to live at the cathedral, the newly named archbishop said he also recognized the historical significance of the Archbishop’s Residence on Chicago’s North State Parkway. The three-story, red-brick mansion has been the home of all the archbishops of Chicago since it was built in 1885 by Archbishop Patrick Feehan. Cardinal George has made his home there since 1997, the year he was named Chicago’s archbishop.

The residence is on the National Register of Historic Places as “a structure of significance.” It hosted St. John Paul II and two of his predecessors before they were elected pope, Cardinal Eugenio Pacelli, the Vatican secretary of state who became Pope Pius XII in 1939, and Cardinal Giovanni Montini, who worked closely with Pope Pius XII, and became pope in 1963.

Archbishop Cupich, who will be installed Nov. 18 during a Mass at Holy Name Cathedral in Chicago, said he plans to use the North State Parkway residence for official archdiocesan functions and to host guests.

He also announced that he will establish the Archbishop’s Residence Committee, which will study the best uses of that facility for the benefit of the archdiocese’s mission.

NEXT: Panelists: Executive actions on immigration will face challenges