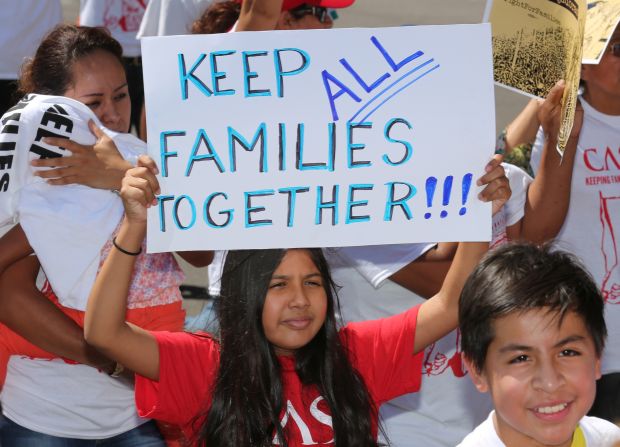 A girl displays a sign during an immigration march and rally near the U.S. Immigration and Customs Enforcement headquarters in Washington Aug. 28. (CNS photo/Bob Roller)

WASHINGTON (CNS) — President Barack Obama’s promised executive actions to fix parts of the immigration system won’t come until after the Nov. 4 elections, but some analysts are predicting anything he does will be treated contentiously, with legal challenges and calls for impeachment.

Nevertheless, the possibility that Republicans will in January hold a majority in the Senate, as well as in the House, solidifies the reasoning for Obama to act by executive order to change administrative policies and enforcement priorities, said panelists at an Oct. 21 immigration law and policy conference at Georgetown University Law Center.

Obama has promised fixes to what many call the “broken” immigration system, preferably with a bipartisan piece of legislation, since his first campaign for president in 2008. Multiple efforts to pass a comprehensive immigration reform bill have failed in Congress.

Most recently, House Speaker John Boehner said this past summer that there was no chance the House would either pass its own bill or act on a Senate immigration bill that was approved a year earlier. That led to Obama’s decision to try to address some immigration issues through executive orders; the administration originally suggested those orders might be announced at the end of the summer.

The likelihood of passing comprehensive immigration reform in the next 10 years “is increasingly remote,” said Simon Rosenberg, president and founder of the New Democrat Network, a think tank and advocacy organization, at the Georgetown conference. “We lost our shot.”

Another panelist, Ana Navarro, Republican political contributor for CNN and ABC News, also lamented that comprehensive reform hasn’t been passed and said that despite inevitable backlash and her preference for avoiding “Band-Aids” that aren’t permanent fixes, Obama should “go big” in whatever he announces.

Navarro said she was surprised and dismayed to realize how much decisions about immigration reform legislation and executive action have been driven by political motivations within both parties. After Obama won the 2012 election with the votes of 70 percent of Hispanic voters, Republican leaders vowed to do more to win them back, including addressing immigration reform.

But as midterm elections approached, support for comprehensive immigration reform was increasingly seen as a liability among candidates in close races, including those who previously supported it.

Obama most recently said he’d announce his measures between the elections and the start of the new congressional term.

Speaking earlier at the conference, Leon Rodriguez, director of U.S. Citizenship and Immigration Services, said his agency is gearing up to be the primary government entity managing whatever Obama announces. His agency administers Obama’s earlier program, Deferred Action for Childhood Arrivals, or DACA, through which young adults in the country illegally who meet various criteria may be protected from deportation. Through July, about 675,000 people had applied for the two-year status, out of the 1.7 million who are estimated to potentially be eligible.

Rodriguez declined to give any hints about what kind of measures Obama is contemplating. But the DACA program has provided a template for, among other things, how to handle a surge of applicants for a program, he said.

Mark Rosenblum, deputy director of the U.S. Immigration Policy Program at the Migration Policy Institute, said possible steps Obama might take include extending the provisions of DACA to other groups, such as the spouses and parents of U.S. citizens and legal permanent residents; offering “humanitarian parole” to certain groups, and changing enforcement priorities.

Norman Ornstein, resident scholar at the American Enterprise Institute, a public policy think tank, said whatever Obama does, implementing it will be made more challenging because of partisan-based roadblocks in the process of getting Senate confirmation for key government positions. Especially if Republicans win control of the Senate, he said, it will be increasingly difficult to get political appointees confirmed, and that, in turn will make it increasingly difficult to effectively implement new policies.

On the other hand, Ornstein said although executive orders don’t have the permanence of legislation, it is “a relatively burdensome process” to overturn them.

Ornstein also said if some Senate races — specifically in Louisiana and Georgia — must go to a runoff election in December or January, respectively, it’s less likely Obama will announce his actions in December, lest they be perceived as potentially harmful to Democratic candidates.

Later in the same conference, other panelists took a look at how the treatment of unaccompanied minor migrants from Central America has evolved, since a surge in that population was reported during the summer.

Ambassador H.E. Francisco Altschul Fuentes of El Salvador attributed the increase in migration of juveniles to “a lack of opportunities” in their own countries. The increase came primarily from El Salvador, Honduras and Guatemala.

Fuentes acknowledged that gang violence also is a factor, especially in Honduras, which he called “the most violent country in the world.”

He said one of the ways to change those factors is for there to be “joint and shared cooperation” between the countries of Central America and the U.S. on a plan to provide better education, health care and opportunities.

In the same session, Barbara Leen, counsel to the director at the Executive Office for Immigration Review in the Justice Department, said the agency is striving to provide legal representation to the unaccompanied minors.

Because immigration violations are not crimes, but civil offenses, people charged with them are not entitled to legal representation without cost if they are too poor to afford it. In early October the administration announced it would provide $9 million in funding to outside organizations to provide legal counsel to the unaccompanied minors.

The Catholic Legal Immigration Network Inc., known as CLINIC, announced its affiliates would receive $2.2 million of the first year’s allocation of $4.2 million. The U.S. Committee for Refugees and Immigrants received the other $2 million.

The daylong immigration conference was co-sponsored by CLINIC, Georgetown Law, the Center for Migration Studies and the Migration Policy Institute.

Allana Haynes contributed to this story.

NEXT: West Virginia’s resources have long been eyed for development