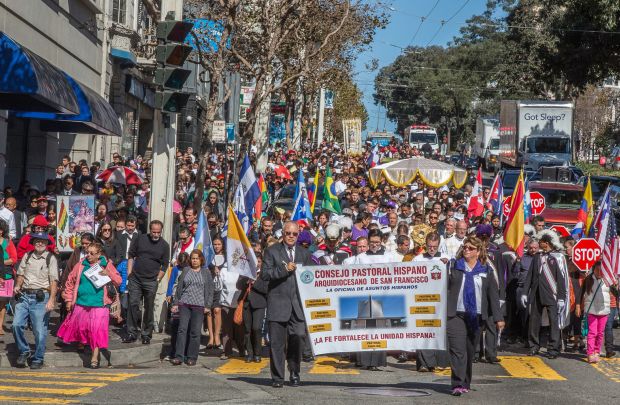 SAN FRANCISCO (CNS) — San Francisco Archbishop Salvatore J. Cordileone carried the exposed Eucharist in a monstrance through the streets of San Francisco, as more than a thousand Catholics processed in a public display of faith from St. Mary’s Cathedral to United Nations Plaza for the 4th annual rosary rally Oct. 11.

“Pope Francis prays three rosaries a day,” said keynote speaker Father Andrew Apostoli, co-founder with Father Benedict Groeschel in 1988 of the Franciscan Friars of the Renewal, urging the about 2,000 people gathered in the Indian summer sun at the noon rally to pray the rosary daily.

“The key to world peace is to be praying the rosary,” said Father Apostoli, an expert on the Marian apparitions seen by the three children at Fatima, Portugal, in 1916.

The day’s events begin with 10 a.m. Mass in Spanish for Hispanic Ministry Day at the cathedral, followed by a procession past City Hall to the rally at U.N. Plaza.

“Our Lady’s great concern was to save souls from being lost,” Father Apostoli told rally participants, urging all to pray the rosary daily as Mary told the children in each of her six appearances. “She even let those three children see a vision of hell so that they could tell us hell was a real thing and we don’t want to go there.”

The Oct. 11 rosary rally, held near San Francisco’s City Hall, is a renewed tradition aimed at bringing public expressions of faith back to the Bay Area. In 1961, Father Patrick Peyton’s Rosary Crusade drew a half million people to Golden Gate Park.

Fifty years later, in 2011 the Legion of Mary, Knights of Columbus, Immaculate Heart Radio, Ignatius Press and the Archdiocese of San Francisco began a new rosary rally tradition in downtown San Francisco. This year the Guadalupanas joined as official sponsors.

In a letter to pastors urging participation, Archbishop Cordileone wrote, “Our rosary rally is a good example of what the Holy Father calls ‘the evangelizing power of popular piety.'”

St. Dominic parishioner and member of the parish’s young adult group, Jerick Rea saw the flyer at church, and came with friend Rose Aerubi. “I felt it would be great,” said Rea who noted that eight novices from the Dominican priory who he sees at daily Mass also were present. “I came to support the archbishop and to pray the rosary.”

As they have every year, administrators and students from an archdiocesan boys’ Catholic high school volunteered to walk with the archbishop from the cathedral and took up a collection at the rally’s conclusion.

“It’s important because our school is sponsored by the Society of Mary,” said Archbishop Riordan High School President Joseph Conti, many of whose students present were football players who had competed late the previous night. “We are very happy to support the archbishop in this endeavor to bring the rosary rally back to life in San Francisco.”

“In this very biblical prayer, we turn to Our Lady so that she may direct us to her son,” Archbishop Cordileone said. St. John Paul II called the rosary a “school of Mary,” the archbishop said. “A school in which he says the Christian people are led to contemplate the beauty in the face of Christ and experience the depths of his love.”

Confessions were heard throughout the two-hour event, and even after the rally concluded at 2 p.m., there were lines of people waiting for confession administered by the four priests sitting on folding chairs on the tree-lined side of the plaza.

NEXT: Speaker talks to teens about virtue of chastity, calls purity ‘a gift’