Speaker talks to teens about virtue of chastity, calls purity ‘a gift’ 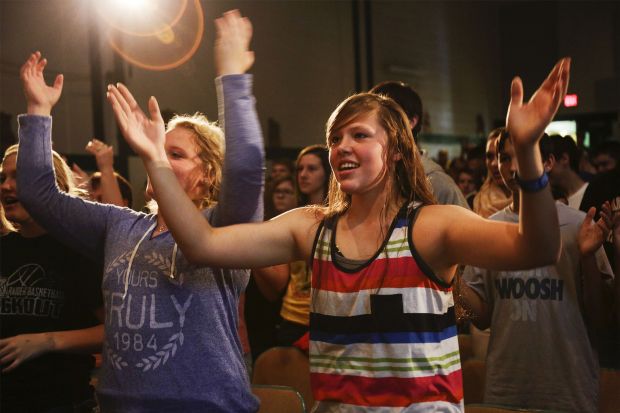 FORT DODGE, Iowa (CNS) — Research shows that people who get married as virgins have a divorce rate about 70 percent lower than couples who don’t wait for marriage to have sex, Jason Evert told a recent gathering of Iowa high school students.

“I know some of you are virgins and some of you are not. Frankly I don’t care about what has happened in the past,” Evert told about 500 people at St. Edmond School in Fort Dodge for an annual youth rally sponsored by the Diocese of Sioux City.

Evert and his wife, Crystalina, are the founders of the Chastity Project. They both tour the United States and a number of other countries giving talks to teens about the virtue of chastity.

In his Iowa talk, Evert posed the question, “If you hope to get married, are you willing to love the person before you meet them?”

He set standards for what a couple should not do before they get married. He used his own marriage as an example.

The second was not to sleep together before marriage and the third was not to use birth control.

“Fertility is a gift. It is not a disease,” said Evert. “Safe sex is a joke. You are worth waiting for. Purity is gift. Go get pure. Go to confession. Never leave Mass. Get a rosary and pray it every day.”

The speaker also addressed pornography, sexually transmitted diseases and dressing modestly. He told stories from his life and others he has encountered to present his points.

Marcus Johnson told The Catholic Globe, the diocesan newspaper, that Evert’s talk “opened my eyes up to marriage and all the essential things that go along with marriage.”

“It made me look at it in a different way,” added the senior from St. Malachy in Madrid. “I’m really glad that I came.”

The theme for the Sept. 28 rally was “Go, I send you, lead with joy,” which comes from Pope Francis’ apostolic exhortation, “The Joy of the Gospel.”

Sean Martin, Sioux City’s diocesan director of new evangelization, catechesis and family life, said the turnout for the rally “has been a blessing.”

Martin had three challenges for the youth at the start of the rally — have a living encounter with Jesus Christ and his church, live the message of the new evangelization and spread the Gospel with joy.

During his homily, the bishop called three students to the front and asked them about why they are Catholic and the best and hardest aspects of being a Catholic.

“I look forward to this (the rally) every year,” said Bishop Nickless. “I thank you for giving up your Sunday to be here, but when you think about, it that’s what Sundays are for — the Lord. Today you are giving yourself to the Lord by celebrating the Eucharist, the most important thing you can do today or any day.”

He told the youth he was proud of them because “you make up the future of the church and the presence of the church right now. God wants your best efforts. He wants you to make a difference in this world.”

Bishop Nickless was assisted at Mass by four diocesan seminarians. At the end of Mass, they shared what was difficult about making the decision to go to seminary and once they were there what made the difference. The seminarians were available throughout the day to answer any vocation questions.

The Thirsting, a Catholic alternative rock band from Portland, Oregon, provided music throughout the day.

More information about the Chastity Project can be found here.

NEXT: Texas nurse with Ebola supported by prayers from her home parish