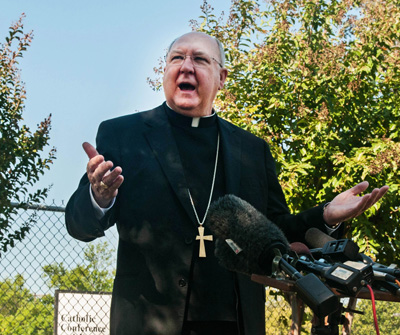 Dallas Bishop Kevin J. Farrell answers questions from media Oct. 20 about what will happen to the diocese’s building in South Dallas where Ebola victim Thomas Duncan’s financee and her family were quarantined. The bishop’s news conference coincided with the lifting of the 21-day quarantine for nearly four dozen people being screened for the Ebola virus, with none showing any signs of the disease. (CNS photo/courtesy The Texas Catholic)

DALLAS (CNS) — Dallas Bishop Kevin J. Farrell said that he followed the teaching of Christ and stepped in to house the fiancee of Ebola victim Thomas Eric Duncan and three others for several weeks at a diocesan facility because when no one else would.

The bishop’s acknowledgement Oct. 20 coincided with the lifting of the 21-day quarantine for nearly four dozen people being screened for the Ebola virus with none showing any signs of the disease. It also capped nearly a month of a scrambling by local, state and federal officials in trying to both combat the virus and calm the public’s fears about its spread.

During the time, two nurses who had contact with Duncan tested positive for the virus after his death. And with the growing health concerns, officials also faced a national public relations headache as they acknowledged missteps in the handling of the crisis, including not initially banning those self-monitoring themselves for symptoms from traveling or coming into contact with the public.

In between, there were various condemnations from nurses about the hospital staff not being properly trained to handle such a crisis, calls for travel bans to the United States from people from the four West African countries hardest hit by the virus, and prayer meetings and candlelight vigils observed at various churches in the Dallas area for Duncan and those impacted by the virus.

Still on Oct. 20, Dallas County Judge Clay Jenkins and Dallas Mayor Mike Rawlings, among other officials, spoke at an early morning news conference at the Dallas County office building, saying that 43 people being monitoring for the virus had not shown any symptoms of the disease and were free to return to their normal lives without fear that they carried or would develop the disease.

They also spoke about area residents being compassionate and welcoming of those who had been self-monitoring themselves or, as in the specific case of those who came into direct contact with Duncan, that they be accepted back into the society.

“There is no question that today is milestone day, a hurdle that we need to get over, but there are other hurdles to jump,” Rawlings said.

Duncan had traveled to the United States from Liberia in September to visit his fiancee and went to Texas Health Presbyterian Hospital Dallas after feeling sick. He was sent home, but was returned in an ambulance several days later and tested positive for the Ebola virus. He had been staying with his fiancee, Louise Troh, her son and two nephews in an apartment in an area of the city where many refugees from Africa make their home.

As Duncan was isolated at the hospital, officials planned to decontaminate their apartment, but the family could not be moved to a suitable location. That’s when the county judge and the mayor asked Bishop Farrell about finding a place for them. He and his staff worked with local officials to transfer the family from their apartment to a building at the far end of the Catholic Conference and Formation Center in South Dallas.

At a mid-morning news conference outside the gated retreat center, Bishop Farrell said that he and several other people, including Troh’s pastor at Wilshire Baptist Church, had spoken with the family earlier in the day.

He confirmed that local officials called him after exhausting alternatives for a suitable place willing to take the family. He said he debated for about 15 minutes before saying that he followed the example of Christ and said “yes.”

“I knew that they had tried to find other places and they just couldn’t find one. I was then moved by their dedication and concern. I too was concerned,” the bishop said. “I felt it was the right thing to do and am so pleased that we did.

Diocesan officials canceled various retreats and meetings at the retreat center while Troh and her family were at the home on the property. He said the family remains there until they find suitable housing. The bishop said the county will properly clean the facility, but that because none of those temporarily housed there tested positive for the virus it did not have to go through hazmat cleaning.

On Oct. 19, about 150 health care professionals attended the annual White Mass at the Cathedral Shrine of the Virgin of Guadalupe in downtown Dallas, with Auxiliary Bishop J. Douglas Deshotel thanking and praising them for their works, saying they, like Christ, were healers.

After the Mass, Dr. Tom Zellers, a pediatric cardiologist and president of the Dallas Catholic Medical Association, said that the blessing from Bishop Deshotel came at a poignant time for health care workers in Dallas.

“Obviously we are trying to do the best we can for patients, both those who are sick and those who are well to keep them well and we had prayers for people affected by the Ebola situation here in Dallas,” Zellers told The Texas Catholic, newspaper of the Dallas Diocese.

She boarded the plane for her return trip to Dallas after conferring with Dallas County Health officials and her family says she was approved for the return travel because her low-grade fever had not spiked to the level that would cause concern.

The news of her travel impacted not only the airline company, but people who were on the flight with her or on the plane that was in service for several days before it was decontaminated and parked in a hangar.

Her family has now hired attorney Billy Martin after the Centers for Disease Control and Prevention said that she had been advised not to avoid public transportation while self-monitoring her symptoms.

Sedeno is executive editor of The Texas Catholic and Revista Catolica, the English- and Spanish-language newspapers of the Diocese of Dallas.