Catholics debate how hard to hit ISIS in Middle East 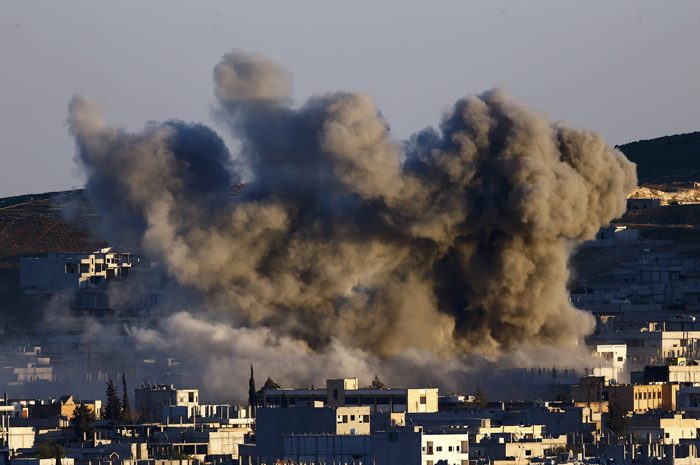 Smoke rises over the Syrian town of Kobani after an Oct. 21 airstrike. Catholics have expressed concerns about bloodshed in the Middle East and see cause for action against the Islamic State militant group. (CNS photo/Kai Pfaffenbach, Reuters) 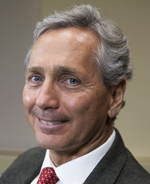 Jerry Powers, coordinator of the Catholic Peacebuilding Network and a professor of the practice of Catholic peacebuilding at the University of Notre Dame’s Kroc Institute. (CNS photo/Chaz Muth)

NOTRE DAME, Ind. (CNS) — San Diego resident Stephanie Celustka has prayed at Mass for an end to the Islamic State threat in the Middle East.

The parishioner from San Diego’s St. Anne Catholic Church is among the 53 percent of Americans who said in a September Pew poll that they support a U.S. military campaign against ISIS, as the Islamic militants in Iraq and Syria are known.

“I think that it’s important that we protect the people who don’t have the ability to protect themselves,” Celustka told Catholic News Service. “I just hope the U.S. doesn’t turn into one of those countries that uses its power to take over and control, but uses the power to protect.”

Pope Francis told cardinals gathered at an Oct. 20 consistory that “we are witnessing a phenomenon of terrorism of previously unimaginable proportions,” and said the situation demands constant prayers and an adequate response from the international community.

Airstrikes from an international coalition led by the U.S. has driven ISIS out of some regions of Iraq and Syria, but the group has continued to dominate some other areas, and some military experts are calling for ground troops.

“I think our involvement in the Middle East, especially in Iraq, is half baked,” said Felipe Dimayuga, a parishioner at Holy Redeemer Catholic Church in College Park, Maryland. “We should commit ourselves, or not at all.”

Though Jerry Powers, coordinator of the Catholic Peacebuilding Network based at the University of Notre Dame, believes action needs to be taken to protect people in the Middle East from ISIS, he’s not convinced all of the just-war criteria has been met for a full-throttle combat mission.

Powers told CNS in an interview at Notre Dame that Catholic just-war criteria for the conflict have been met in the areas of just cause, last resort and right intention.

Other just-war criteria — legitimate authority, proportionality and probability of success — are murky in this situation, he said.

“My real concern is the probability of success and proportionality,” he said. “Unfortunately, we have been in Iraq most of the past 11 years. We have bombed, we have trained, we have armed and none of that kept us to where we are now. So, it’s hard to see how much more limited intervention, airstrikes, no boots on the ground, arming, training the Iraqi military and various other factions in the region, how that’s going to create a better, more stable and just situation than we had after 11 years of doing that.”

Syria is a connected, yet different problem with regard to the criteria of probability of success and legitimate authority, since “you basically have a failed government and an archaic situation with literally hundreds of rebel groups of various stripes,” Powers said, “and to suggest that providing arms to one group is somehow going to resolve that situation I think is not dealing with reality.”

Even if this conflict doesn’t meet all of the just-war criteria, Darren Anderson, a parishioner of Holy Cross Catholic Church in Thornton, Colorado, said he believes the U.S. has an obligation to use military force against ISIS.

“There are victims who are unable to take care of themselves or their loved ones,” Anderson told CNS recently, “and they need some assistance.”

Notre Dame’s Powers also believes the U.S. has a moral obligation to intervene in this case, because he asserts that the 2003 U.S. invasion of Iraq destabilized the country and made it vulnerable to the ISIS threat.

“These are really hard cases because people are being slaughtered, people are dying,” he said. “Groups like ISIS have to be stopped. We have to do something. We have to act. But it’s not clear that the actions we have chosen are going to be successful and proportionate in terms of the death and destruction caused by our actions versus the death and destruction that will be prevented by our actions.”

NEXT: Dallas bishop calls decision to house Ebola victims the ‘right thing to do’