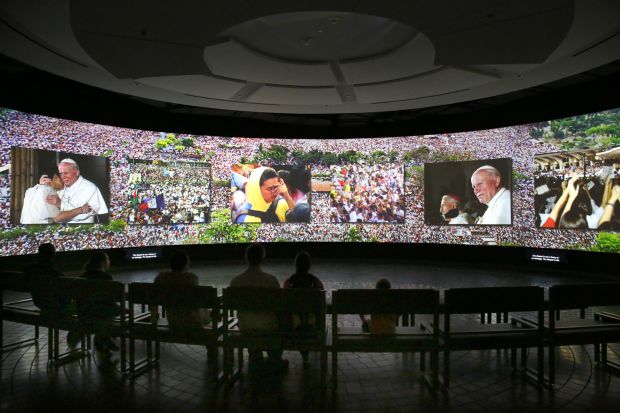 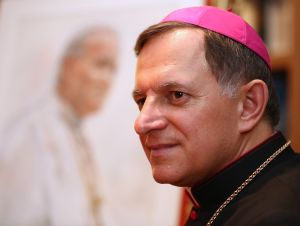 WASHINGTON (CNS) — On his first visit to a Washington shrine dedicated to the man he worked under for nearly 10 years, the former secretary to St. Pope John Paul II said he was “deeply impressed” by the tribute and could feel the late pontiff’s presence within the building.

During his visit, he toured the shrine’s new permanent exhibit, “A Gift of Love: The Life of St. John Paul II,” which features numerous artifacts, personal items and manuscripts that highlight the pope’s life and papacy. The archbishop called the exhibit “very telling.”

“For me, personally, that was a meeting with John Paul II, the person that I know,” Archbishop Mokrzycki said through an interpreter in an interview with Catholic News Service. “(It was) as if I were at home together with him.”

Archbishop Mokrzycki began working as St. John Paul’s private secretary in 1996, and remained in that position until the pope’s death in 2005. His close relationship to the pope allowed him to gain a deeper understanding of St. John Paul’s devotion to his work and to his congregation, comprised of millions of people from all over the world.

“John Paul II knew that there were many people out there who would not be able to go to Rome to meet him,” he said. “That’s why I encourage the young people from the United States to come and visit this shrine … so that they can learn about the teaching of John Paul II.”

The shrine’s exhibit, which focuses a great deal on St. John Paul’s extensive travels, emphasizes the pope’s desire “to reach out to all the people on all the different continents, to … send them a message that he does care about them, that he wants to bring them to Christ,” Archbishop Mokrzycki said.

“Walking through the different galleries, you can learn a lot about him as a person and about what he’s done, what his accomplishments were and all the aspects of his papacy,” he said. “It shows the whole pontificate and the grandeur of his personality … and it reflects very well, very accurately, his papacy.” 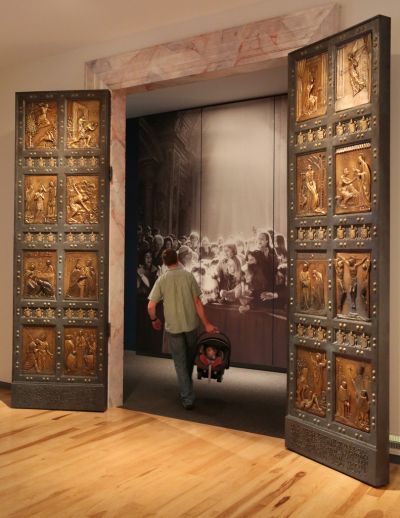 The official opening of the exhibit took place with a ribbon-cutting the evening of Oct. 22.

Before the ceremony, Archbishop Mokrzycki was among concelebrants of a special Mass on the main floor of the shrine. Baltimore Archbishop William E. Lori, the supreme chaplain of the Knights of Columbus, was the principal celebrant. The shrine is a special initiative of the Knights.

The Ukrainian archbishop processed through the congregation with a reliquary holding a vial of the late pope’s blood. The relic is a centerpiece of the shrine.

Archbishop Mokrzycki noted that the pope felt a unique connection with young people.

“John Paul II in a special way embraced the youth, the young people, because he didn’t want them to squander their life,” he said. “He knew the difficulties that every person has to go through, especially the young people. That’s why he wanted to be close to them.”

As a friend, the archbishop said, St. John Paul was “a normal man” who was always faithful to his friends. His deepest wish, he said, was to be close to the people he served and to continue developing new relationships.

“He prayed, he worked and knew how to enjoy life. And he showed himself like this to us,” he said. “He wanted to show that he’s close with all the people, that he (could) share their sorrows and their joys.”

During his papacy, St. John Paul canonized 483 saints and beatified more than 1,300 others. Archbishop Mokrzycki said this was an effort by the pope to make saints more accessible by showing that’s “it’s possible to live a virtuous life” in today’s world. On the inaugural celebration of the pope’s own sainthood, the archbishop said he felt a sense of joy. 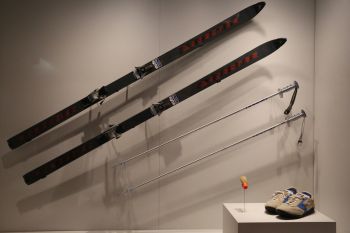 “I didn’t think that by beatifying (and) canonizing so many people that he would be canonized too in such a short period of time,” he said. “We lost our beloved pope when he died, but this sense of sorrow has been transformed in the joy of him being a saint today.”

In response to the violence and upheaval facing today’s world, Archbishop Mokrzycki said people should look to the teachings of St. John Paul for guidance.

“We should be led by the law of love and forgiveness,” he said. “(St. John Paul) showed us many examples that there’s a need to protect human dignity, human freedom and the human rights.”

On a more personal level, Archbishop Mokrzycki encouraged people to follow St. John Paul’s example in answering their own calls to faith.

“As John Paul II once said, saints are not there to cherish them, but to follow them,” he said. “From John Paul II what we can learn is this responsibility for our own vocation and realization of this vocation for what we do and who we are.”

The archbishop fondly related the pope’s nighttime ritual, which he said even Pope Benedict XVI did not know about until he was elected as the late pope’s successor.

“By the end of each day, around 10:30 p.m., he would go to the chapel, he would pray for a short period of time, then he would go back to his bedroom … (and) dim the lights,” he said. “He would open the … window, and then he would bless the world.

“He would bless us every day.”

PREVIOUS: Sisters serve God and his people on mountain oasis

NEXT: Faith, kindness of slain U.S. journalist recalled at Mass