Sisters serve God and his people on mountain oasis 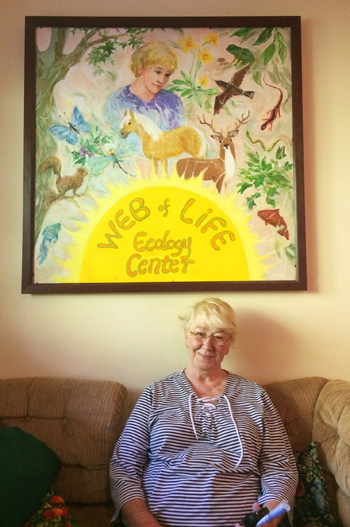 KERMIT, W.Va. (CNS) — Fifteen, maybe 20 ruby-throated hummingbirds dart back and forth from the lowest branches of the maple trees to the feeders on the front porch of the mountaintop home shared by Sister Kathleen O’Hagan and Sister Gretchen Shaffer.

Occasionally one of the tiny birds hovers at shoulder level eying the two women standing in the wet grass as the mist of the fog burns off in the morning sunlight. The women divvy up tasks that must be done on the land conservancy they call home before a midday trip to Charleston 90 minutes away.

Sister Kathleen heads to the chicken coop, where five laying light brown Buff Orpington hens and a rooster are waiting for a new supply of feed. “Good morning, girls,” Sister Kathleen greets them, grabbing a shovel to scoop the manure that will fertilize the vegetable garden. She spreads laying mash in a fenced in area of the coop and the chickens begin to pluck at the feed. Keeping the chickens content and well fed are key to good egg production.

Nearby, Leo, Katy and Brindle, a trio of friendly dogs, explore the grass and the edge of the woodland surrounding the house and the coop, trying to catch the scent of any animal that may have ventured from the woods overnight.

The property also is home to eight cats — all good mousers — two horses, and a plethora of wildlife and diverse plants and herbs.

It’s life on the John A. Sheppard Memorial Ecological Reservation, known as JASMER, which the sisters oversee with the help of volunteers and their neighbors on the mountain ridge above Marrowbone Creek in Mingo County.

Sister Gretchen, 78, a member of the Congregation of St. Joseph, and Sister Kathleen, 70, a member of the Sisters of Notre Dame de Namur and a native of Drexel Hill, Delaware County, live a ministry of presence and stewardship on the 465-acre reserve under a banner called Big Laurel Learning Center. It’s named for the Big Laurel community that was settled in the 19th century by people determined to blend self-sufficiency with a commitment to community.

The mountaintop tract is a natural oasis in a part of Mingo County that is dominated by coal mining. JASMER is surrounded by several mining operations. The road up to Big Laurel passes railroad tracks used by long coal trains, conveyors, heavy equipment and truck washing stations. A guard at the bottom of the mountain waves residents and visitors in.

The land was set aside in the 1940s by a visionary woman named Edwina Pepper. Sister Gretchen said Pepper was ahead of her time in creating the land conservancy so that the Appalachian way of life could be preserved for future generations.

From an oasis in the midst of heavy industry, the sisters oversee a ministry that includes an ecology center, summer camps for kids, guest houses for writers or people on retreat, tutoring and literacy classes, vegetable garden, food pantry and life coaching for people. At one time the sisters even ran a school for the children living on the mountain. A mental health counseling service recently ended. 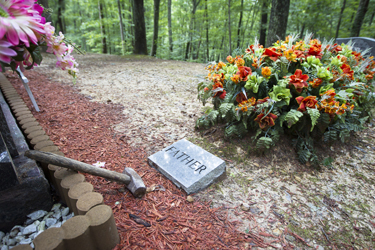 The tombstone of a coal miner lies in a cemetery on a mountain ridge near Kermit, W. Va, Aug. 20. St. Joseph Sister Gretchen Shaffer of the Big Laurel Learning Center nearby said the days where young people could drop out of high school and get a decent paying job in coal mining are long gone. (CNS photo/Tyler Orsburn)

Big Laurel has been home for the sisters since 1976. It was the 1975 pastoral letter by the Appalachian bishops, “This Land Is Home to Me,” that inspired them to come to Mingo County. They said the same challenges that people faced then — poverty, unemployment, and drug and alcohol abuse — continue today.

“This whole ministry is about people and about the land and about God’s spirit that’s in them and that’s also in the land. It’s about preservation and fostering a broader life, especially for the children,” said Sister Kathleen.

Some of the women’s efforts are as simple as renewing interest among neighbors in growing their own food, she said.

“Living off the land is not happening the way it used to. It’s a phenomenon to me because you could. But I also know you have to have gas, you have to have a machine. It’s costly,” Sister Kathleen said.

For the children, it’s as basic as connecting them with the natural world, said Sister Gretchen, who grew up in Clarksburg, West Virginia, in a family of 10 children.

“One of the things we have found, and this isn’t just in this region, is children are suffering from nature deficit, which is just completely astonishing to me because 80 percent of this county is covered by forest. No child has to go far to be right in the midst of the forest,” she said.

Some of the children, she explained, have a fear of nature, often instilled by their parents.

“Our belief is that you’re not going to protect what you don’t love and you can’t love what you don’t know. So the first step in preserving the mountains, the Appalachians, the oldest mountains on earth, is to first know them.

“We don’t have to go many generations back to know that the local people who say that ‘Every chance I got I spent in the woods.’ Now many times the children are much more comfortable in their house doing video games. So that’s one of the things that you’re up against.”

Sister Gretchen and Sister Kathleen have started thinking about the future of Big Laurel. They have cut back on the jobs they take on and are talking with the members of the board and supporters on a transition plan, preparing for the day they can step aside and let others carry the ministry forward.

“One of the things that has always been very providential in this project is that whenever a need would arise, someone would come forth to meet that need,” Sister Gretchen explained. “So we always believed that this was God’s project. This was God’s doing and so we could rest with that, knowing that God has always provided.”