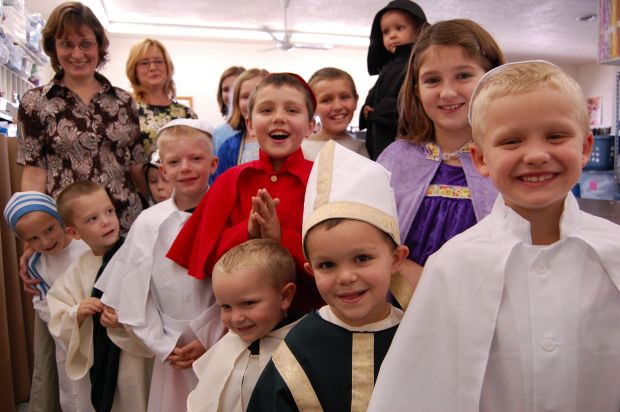 Maria Rioux and costume-maker Debra Fuhrman, owner of Our Coats of Many Colors workshop in Cummings, Kan., stand with children dressed as various saints.

BROWNSVILLE, Texas (CNS) — Every October, many look forward to Halloween — the trick-or-treating, the parties and especially the costumes.

Some might view these costumes as harmless fun but Halloween costumes, like television programming and other media, form minds, said Father Gregory T. Labus, pastor of St. Joseph Parish in Edinburg and director of the Office of Liturgy and Worship for the Brownsville Diocese.

“When it comes to television and other media, people will say, ‘I don’t believe any of that stuff,’ but if you’re watching that stuff regularly, it’s forming you. It is, little by little, making an impression on you and forming your thoughts,” he told The Valley Catholic, diocesan newspaper of Brownsville.

“I would say it’s a similar kind of case with costumes, especially with very young minds. Pregnant nuns or whatever, it’s disrespectful and it’s forming an impression that is not good. … Personally, I would say that Christian families should avoid that sort of thing,” Father Labus added.

“It’s a sign of disregard, of disrespect for people of faith,” said Sister Nancy Boushey of the Benedictine Monastery of the Good Shepherd in Rio Grande City, whose members wear a habit. “It takes an authentic call from God and makes a mockery of it, no matter what the faith is, whether it’s Jewish or Catholic or any other faith.”

Mocking religious figures whether at Halloween or any other time of year is nothing new, said Ken A. Grant, a lecturer in history and religious studies at the University of Texas-Pan American in Edinburg.

“It was often the case during certain medieval festivals — especially the Feast of Fools — where the lower ranks of society had the opportunity to impersonate the higher clergy (bishops, priests, abbot, archbishop, etc.) for a day,” Grant said. “They would engage in mock rituals, pronunciations, songs, games and all of the rest to poke fun at the established order.

“It was a bit of a safety valve for society, allowing subversive pressures to be blown off in a controlled environment.”

Whatever the reasons for wearing such costumes, Sister Boushey said it is “hurtful.”

“It saddens me because it is sacred clothing for me and for others who wear it — the priests and sisters,” she said. “The clothing is sacred to us and to use it for laughs, it’s very saddening to my heart. To me, it’s a sign of disrespect of God’s call to us.”

Some churches and Catholic schools, however, do encourage children to dress up as their favorite saint for Halloween or a day later, on All Saints’ Day. This may entail respectfully dressing up as a priest or religious sister but, “usually there is some catechesis that goes with it,” Father Labus pointed out.

“They learn about the saint,” he said. “They learn what the saint did and why they are a saint. I think that would be good formation for children, help them to know about good role models in their lives.”

The priest added, “You look at Superman and Spiderman but we have greater heroes, we have greater superheroes — the saints. And they are the ones we look to. They give us hope because it’s possible to live the Christian life. They’ve done it.”

NEXT: Veterans find help to heal their emotional wounds at Franciscan center