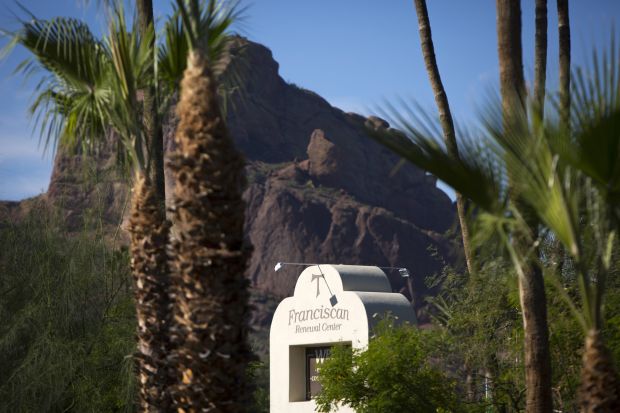 The Franciscan Renewal Center in Scottsdale, Ariz., is shown in this Oct. 16 photo. The center began its outreach for veterans when workers there saw more and more people in the community who had been wounded by war. (CNS photo/Nancy Wiechec)

CHANDLER, Ariz. (CNS) — David Campbell believes he has died twice in his lifetime.

He was not breathing at birth. Then, as a young soldier, he was hit by an exploding grenade and resuscitation efforts nearly failed.

“I believe in God very much,” he told Catholic News Service during an interview at his home in Chandler. “I’ve been through too much not to.” 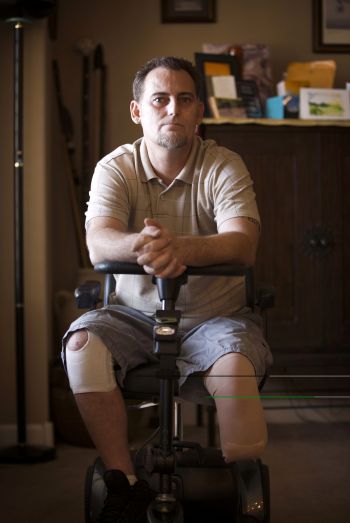 U.S. Army veteran David Campbell poses for a photograph inside his home in Chandler, Ariz., Oct. 19. Campbell served in operations Desert Storm and Desert Shield in the early 1990s and was severely injured in a grenade explosion that nearly took his life. (CNS photo/Nancy Wiechec)

As Veterans Day approached, Campbell reflected on his service, the pain he endured after war and how, after two decades of emotional and mental anguish, he found some relief in a healing retreat and a new form of psychotherapy.

The son and grandson of military men, he was born on an Army base in Fort Hood, Texas, and enlisted at age 17. His basic training began Aug. 2, 1990, the day Iraq invaded neighboring Kuwait.

“Our drill sergeants told us pretty much that we were going (to Iraq),” Campbell recalled. “And we trained specifically for the desert.”

When he arrived in the Middle East, he spent time in a forward operating base. Then the ground assault on Iraq began and he was among the infantry forces sent to destroy Iraq’s military capabilities.

Campbell’s duty was to help clear away anything blocking the movement of his tank unit.

“Any enemy obstacles at all, we would overcome them. So we dealt with a lot of explosives,” he said. “We were taking a lot of enemy artillery and tank (fire) and a few of our guys died. A few of them right next to me died. It could have been me.”

Later, he fell victim to the explosion that nearly killed him.

“I was inside an enemy bunker and I have no memory of what happened,” he said, adding that he has doubts about what he was told — that the blast occurred when his team was about to set off a charge to destroy enemy paperwork. He spent six weeks being treated in mobile Army medical units.

When he returned to the U.S., he received disturbing news.

“I got a letter from the government … saying that I can’t have kids, that I was exposed to mustard agent and depleted uranium,” he said. “All my bones are dying. That’s why I had to get my leg amputated.”

He said he had a lot of anger and that his nightmares would not subside.

“I spent 20 years drinking and drugging to try to get by so I didn’t dream at night.”

He worked as a photographer at a portrait studio and was great at it, he said. But he kept turning to alcohol and drugs to try to avoid the nightmares and thinking about the war.

Then, after some providential connections between friends and his therapist, Campbell said he realized things had to change.

“About four years ago I decided I can’t live life like this anymore and there has to be something better, and I started working on myself.”

He said he was “willing to do whatever it takes to get on the right path that God wants us all on.”

Campbell began EMDR (Eye Movement Desensitization and Reprocessing) psychotherapy, a process that helps people with traumatic memories develop a way to recall the events without experiencing the powerful emotions tied to those events.

He also attended a weekend workshop for veterans at a Franciscan retreat center in Scottsdale.

“Luckily we’ve found the Franciscan Renewal Center and they’ve given us the opportunity to heal through ‘Healing of Memories,’ and to me that’s been huge,” he said. 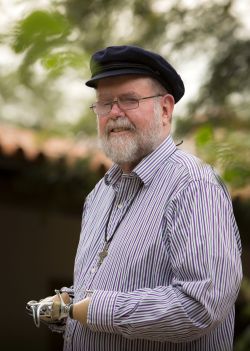 Through his “Healing of Memories” retreat, the Rev. Michael Lapsley is helping U.S. veterans discover a renewed sense of hope and belonging. (CNS photo/Nancy Wiechec)

The workshop is led by the Rev. Michael Lapsley, an Anglican priest and missionary to South Africa, where he was an anti-apartheid activist.

Rev. Lapsley was maimed by a letter bomb in 1990 as he worked with the African National Congress. He lost his hands and right eye in the explosion and his eardrums were shattered. There were other injuries too.

“But I would say that in the bombing, I had a sense that God was with me,” the priest told CNS. “I felt God’s presence with me. I felt that Mary, who watched her son being crucified, understood what it was that I was going through.”

He said the prayers, love and support he received from people across the world helped him to make the bombing “redemptive.”

“By redemptive, I mean to bring life out of death, good out of evil. … I realized if I was filled with hatred and bitterness and desire for revenge that I would be a victim forever. They would have failed to kill the body, (but) they would have killed the soul.”

He returned to South Africa following the dismantling of apartheid and witnessed an entire nation “damaged” by the experience.

He began reaching out to people who had suffered violence of any kind. Part of the process was to “create safe and sacred spaces where people could begin to deal with what they had inside of them,” he said.

Rev. Lapsley brought his “Healing of Memories” retreat to the United States in 2008, offering it first to veterans in Minnesota. In 2013 the Franciscan Renewal Center hosted the retreat. Dozens of veterans, including Campbell, attended at no cost. The center hosted two more workshops this year and is planning for three in 2015.

The focus of the workshop is storytelling and small-group discussions.

“I was able to talk with other veterans for the first time in a group,” said Campbell. “And not everyone was just talking about PTSD (post-traumatic stress disorder) and being angry. There was actually a solution that was presented to us.”

He said he was finally able to see that PTSD, anxiety and depression were “not a death sentence” and “there’s actually a light at the end of the tunnel.”

Campbell’s wife, Melissa, said she noticed a “renewed sense of hope” in her husband after the retreat. “I’m proud of him for going, and I’m seeing the improvement.”

While at the Franciscan center, David Campbell said he learned a bit about St. Francis of Assisi and his own time as a soldier and prisoner of war.

“He’s dealt with his own demons,” Campbell said of the saint. “The same demons we all deal with. And instead of hiding from them now we get a chance.”

Campbell has presented talks to police and firefighters and to other veterans about his healing journey. He was honored earlier this year by local veteran groups and the local ABC affiliate for that work and his work with at-risk youths. He’s also being trained as a facilitator for future “Healing of Memories” workshops.

His main message is “help is out there and healing is possible,” but he said he never plans the talks he gives.

“I’ve never once tried to think of what I’m going to say. I just ask Jesus to speak through me. That’s all I do.”

He was scheduled to address a Veterans Day picnic at the Franciscan Renewal Center Nov. 9.

NEXT: ‘Don’t give up hope’: Archbishop responds to woman’s suicide plan