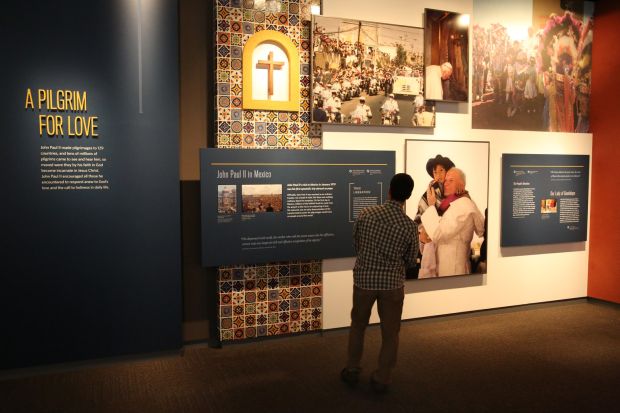 A man looks at an exhibit at the St. John Paul II National Shrine in Washington Oct. 7. (CNS photo/Bob Roller) 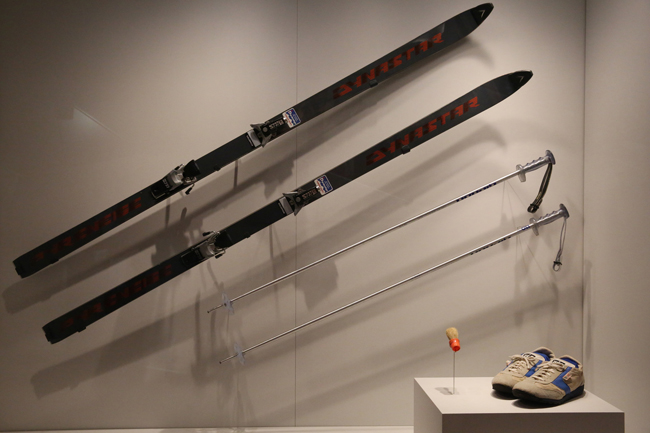 WASHINGTON (CNS) — In the heart of the national shrine dedicated to one of the most revered figures in church and world history, a new exhibit pays further homage to the man who embodied the Catholic Church for more than 25 years.

“A Gift of Love: The Life of St. John Paul II” will have its inaugural opening Oct. 22, the pope’s feast day, as a permanent exhibit at the St. John Paul II National Shrine in Washington. The 16,000-square-foot display features numerous artifacts and insights into the life of the late pope, including photographs and footage of him as a young priest in Poland.

The executive director of the shrine, Patrick Kelly, said the opening of the exhibit lends a “major catechetical element” to the shrine.

“We’re a shrine so we’re a religious site, but we have this great exhibit, and never before have the two elements been put together, where you have a shrine, but you have a major exhibit to the saint that the shrine is dedicated to,” he said in an interview with Catholic News Service.

A walk through the exhibit not only draws the visitor into the works and legacy of the beloved pope, but also offers a glimpse into the life of Karol Wojtyla before he became Pope John Paul. Included among religious artifacts such as traditional headgear worn by the pope is a pair of skis and tennis shoes that St. John Paul used when he was a young man.

Before it became a shrine, the building was home to the Pope John Paul II Cultural Center. The Knights of Columbus acquired it in 2011 and converted it into a shrine to keep with the original vision of the center, Kelly said. 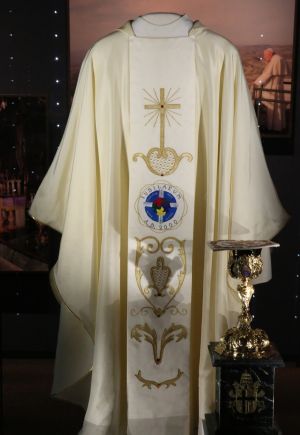 Vestments and a chalice of St. John Paul II are seen at a national shrine in his name in Washington. (CNS photo/Bob Roller)

“We decided it was appropriate to build a shrine dedicated to this great saint who embodied so many of the trials and tribulations of the 20th century,” he said.

One of the hallmark features of the exhibit is an interactive touch-screen display that provides information on St. John Paul’s travels while he was pope, which included visits to more than 100 countries. The device allows users to choose a specific country and learn more about the pope’s visit to that country through timelines, photographs and videos on the display.

“I think John Paul II had an authenticity that people recognized,” Kelly said. “I mean, he connected with people. People who were in a crowd of tens of thousands felt like he was speaking to them.”

Other parts of the exhibit focus on the scholarly aspects of St. John Paul’s papacy and the works he put forth during his time as pope. Several galleries highlight his teachings through original manuscripts and encyclicals penned by the pope. 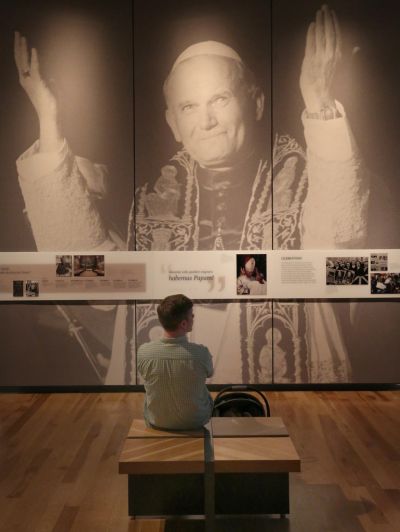 A man sits near a large image of St. John Paul II at a national shrine in his name in Washington Oct. 7. (CNS photo/Bob Roller)

Kelly said he hopes the exhibit will draw people on pilgrimages from throughout the U.S. as well as countries like Canada and Mexico. He thinks St. John Paul’s international influence, as well as his work for human rights, will also be able to draw nonreligious people to the shrine, he said.

“Certainly we hope to draw Catholics and Christians, but I think all people of good will recognize that in John Paul II they had a person of extraordinary ability (and) intelligence,” he said. “His work to defend the poor, the needy, that’s universally recognized by people of all faiths and people of no faith, and I think they will be drawn to come here just to learn more about this great man.”

St. John Paul’s worldwide appeal is certainly manifested in the exhibit, which showcases gifts and letters from various international leaders. A silver box from President Ronald Reagan and a Christmas plate from Helmut Schmidt, the former chancellor of West Germany, are just a couple of the items on display.

Aside from the many physical representations of St. John Paul’s legacy housed in the shrine, Kelly said he thinks the exhibit will offer visitors a chance to connect with him on a spiritual level.

“I think what people will get out of coming through the exhibit is they will see how (St. John Paul II) responded to the Holy Spirit in his life and they can do that too,” Kelly said. “They can make a gift of themselves just in the way that John Paul II made a gift of his life to others, and to the church and to the world. … All Christians are called to do that.”

The exhibit is free and open to the public.

More information about the St. John Paul II National Shrine and the permanent exhibit is available on its website here. 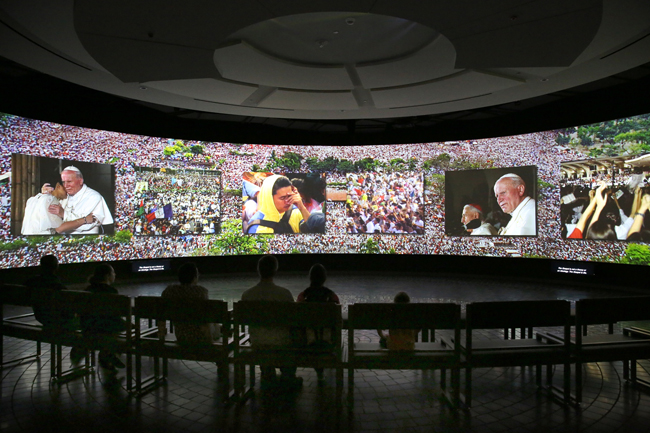