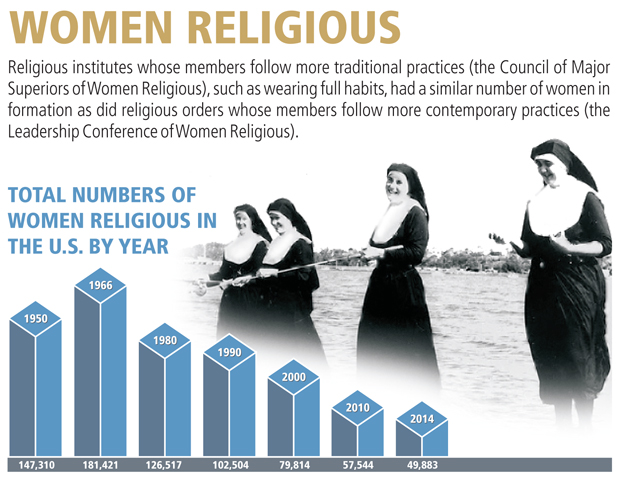 WASHINGTON (CNS) — A longtime trend of declining numbers of women in religious orders is unpacked a bit in a new study by Georgetown University’s Center for Applied Research in the Apostolate.

In the report released Oct. 13, the social science researchers of CARA observed that the demographical story of women religious in the United States takes some disentangling.

Although past studies have talked about the rapid decline in the number of nuns in the country starting after the Second Vatican Council, “such studies did not provide the more nuanced narrative of what decline meant for the individual religious institute,” the report said. “How, for example, did religious institutes respond to declining membership?” 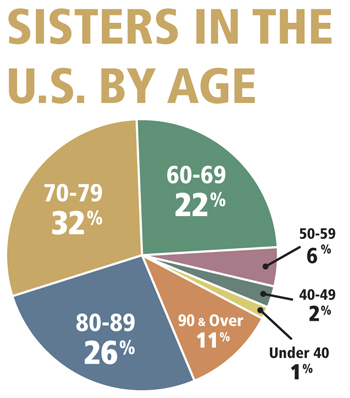 From a peak in 1965 of 181,000, the number of women religious in the U.S. has steadily declined to the current 50,000. That’s about how many sisters there were in the United States 100 years ago, said the report: “Population Trends Among Religious Institutes of Women,” by CARA staffers Mary L. Gautier and Mark M. Gray, and Erick Berrelleza, a Jesuit scholastic at Boston College.

CARA found that as their numbers declined, some religious orders reorganized their internal structures, while others merged with other religious institutes. Some have been bolstered by sisters from other countries or women who joined a religious order later in life. Others simply stopped serving in the United States.

“In the face of diminishment,” it said, “women religious have innovated by responding with new models when old models proved ineffective.”

That’s partly why the report refers to disentangling, Gautier told Catholic News Service. Some whole institutes disappeared from the Official Catholic Directory, a reference book published annually, whether by being folded into another organization, by leaving the United States or adapting in another way.

The report pointed to a flaw in assumptions about the growth in women’s religious vocations coming primarily in orders that are “traditionalist” — meaning for example, those whose members wear a full religious habit — while institutes whose members do not wear a traditional habit are declining.

“One of the most striking findings regarding new entrants is that almost equal numbers of women have been attracted” to both kinds of religious orders, the CARA report quoted. Gautier’s book categorized the two types of religious orders according to whether the organizations belong to one or the other of two leadership organizations, the Leadership Conference of Women Religious and the Council of Major Superiors of Women.

The LCWR’s member organizations, which account for about 80 percent of the country’s women religious, had among them 73 postulants, 117 novices and 317 women who had taken temporary vows in 2009.

Although its member organizations account for a much smaller percentage of the nuns in the U.S., CMSWR organizations had about the same number of women in formation as did LCWR institutes, said Gautier — 73 postulants, 158 novices and 304 who had taken temporary vows.

Among other items in the report, CARA pointed to several institutes that stood out in the data for having a “slowing rate of decline” in number of members. When the authors dug a bit, they found that such slowing sometimes was the result of one community absorbing another. 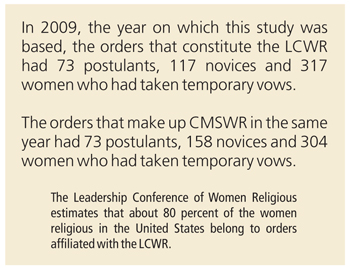 “It is not that the Sisters of St. Joseph of Springfield exhibited a sudden increase in new vocations, but rather these two mergers account for the upswing,” the CARA report said. “In such cases, the apparent slowing rate of decline is not related to an increase of new vocations; instead, it is these mergers that account for the increases in membership.”

There are some institutes that show consistent growth even without such mergers, the report said.

“These communities do not exhibit the growth-followed-by-decline pattern and seem to point to even further expansion into the foreseeable future,” it said. For instance, the Religious Sisters of Mercy of Alma, Michigan, was established in 1973 with nine members. The community has continued to grow gradually, and its membership will approach 100 by the end of the decade, the report predicted.

Six institutes that have been cited in anecdotes and news reports as evidence of a reversal of the trend toward decline, have increased their membership by a combined total of 267 people since 1970. That number, the report said, is “too few to have an effect on the overall picture.”

“Whatever these institutes have done or are doing is unlikely to offset losses in the tens of thousands elsewhere. It is simply not enough.”

NEXT: Only way to end poverty is to address its root causes, says speaker