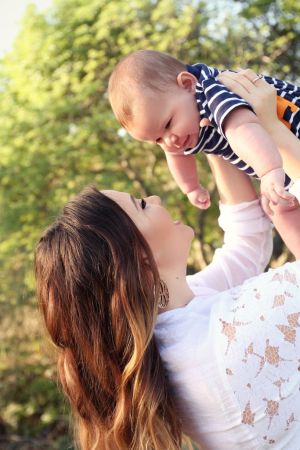 Rebekah Chaveste, who had successful RU-486 reversal after taking the pill at a Planned Parenthood clinic in San Francisco, plays with her son, Zechariah, in early March. (CNS photo/courtesy Rebekah Chaveste)

SAN FRANCISCO (CNS) — As soon as Rebekah Chaveste swallowed the first pill of the RU-486 abortion regimen at a Planned Parenthood clinic, she regretted it.

“I was crying and I was alone,” recalled Chaveste, a 20-year-old college student who lives in the Sacramento area.

“Thank God for smartphones,” she told Catholic San Francisco. Sitting in her car outside Planned Parenthood, “I googled RU-486” and found a website for RU-486 reversals, www.abortionpillreversal.com.

Chaveste thought it was fake but called anyway and even though the website was for an organization based in San Diego, the woman at the end of the telephone found a doctor nearby to help her, Chaveste recalled.

Abortionpillreversal.com is a website of Culture of Life Family Services, which has a nurse on call 24/7, a toll-free telephone number (877) 558-0333, and a network of 200 participating physicians around the country.

Chaveste was able to save her unborn baby — because of a recently developed medical protocol that has been able to save more than half of babies whose mothers had been administered the first pill for a RU-486 chemical abortion and received the reversal therapy.

Women undergoing medical, rather than surgical, abortions in the first nine weeks of pregnancy take two courses of the pill 48 hours apart.

“The conventional wisdom of the abortion industry is that there is no way to stop the RU-486 procedure once it is started. This, however, turns out to be false. Chemical abortions can be reversed and the procedure has been effective in more than 23 states to date, including California,” said Vicki Evans, Archdiocese of San Francisco respect life coordinator.

“There have been more than 50 deliveries of healthy babies with no birth defects after the reversal protocol and more than 100 other women are pregnant with apparently normal pregnancies after successful reversals,” said Dr. George Delgado, medical director of Culture of Life and its Abortion Pill Reversal Program.

Delgado is co-author with Bay Area obstetrician Dr. Mary Davenport of a medical journal article on RU-486 reversals, “Progesterone Use to Reverse the Effects of Mifepristone,” published in the December 2012 issue of The Annals of Pharmacotherapy. Delgado developed the protocol now in use.

Davenport, of El Sobrante, is immediate past president of the American Association of Pro-Life Obstetricians and Gynecologists.

Misoprostol has been shown to cause birth defects in a small number of women, Davenport told Catholic San Francisco, newspaper of the Archdiocese of San Francisco.

Women who choose medical abortion and regret it within the first two days before they take the second drug have a chance to save their baby, she said.

The RU-486 reversal procedure has been successful in 59 percent of cases from May 2012 to June 2014, according to statistics collected by the Abortion Pill Reversal Program, which is headed by nurse manager Debbie Bradel, along with Delgado.

Davenport and Delgado are both trained in NaPro Technology, a pro-life fertility method, at the Pope Paul VI Institute for the Study of Human Reproduction in Omaha, Nebraska.

Since RU-486 was approved by the federal Food and Drug Administration in 2000, the number of medical abortions rose to account for about 23 percent of all abortions in 2011, according to the Guttmacher Institute’s July 2014 abortion fact sheet.

Although Planned Parenthood tells women, and states on its website, that trying to halt the RU-486 procedure will result in a deformed baby, that does not appear to be true in the babies born after progesterone RU-486 reversal therapy, Davenport and Delgado said.

“The medical literature does not reflect that RU-486 causes birth defects and we know that progesterone reversal therapy does not cause birth defects,” Delgado said.

Dr. Matthew Harrison, a pro-life doctor in Charlotte, North Carolina, was the first to successfully reverse RU-486 about eight years ago for 20-year-old Ashley. Ashley and her little daughter appeared at the March for Life in Washington, D.C., last January.

The St. Juan Diego Women’s Center in San Jose has launched a campaign to publicize the RU-486 reversal program outside Planned Parenthood clinics. “We stand outside the abortion clinics and tell them it is not too late to change their minds,” said St. Juan Diego sidewalk counselor Patsy Gonzalez.